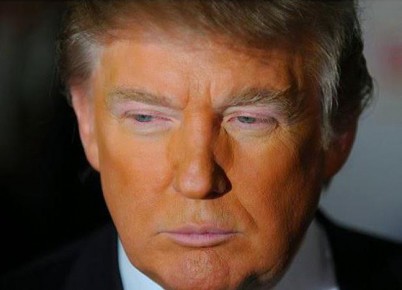 Surprisingly, being bright orange has nothing to do with his support.

Supporters of Republican presidential front-runner Donald Trump come from a surprising variety of backgrounds, according to a new analysis of demographic data.

“The places where Trump has done well cut across many of the usual fault lines of American politics — North and South, liberal and conservative, rural, and suburban,” The New York Times explained in a study of demographic data.

However, there are some variables that seem to characterize the typical Trump voter.

“It’s a nonurban, blue-collar and now apparently quite angry population,” William Frey, a demographer at the Brookings Institution, told The Times. “They’re not people who have moved around a lot, and things have been changing away from them, but they live in areas that feel stagnant in a lot of ways.”

Here are 10 surprising variables that have a strong correlation (or negative correlation as marked with *) to support of Donald Trump, according to The Times:

Those who were surprised when Trump won a large share of college-educated voters in New Hampshire and Nevada may be less surprised that areas with the strongest support for the New York City billionaire also had a relatively high number of residents who didn’t finish high school, according to The Times.

2. Self-describe their background as “American”

The sense of American heritage has a strong correlation with Trump supporters, bolstered by statistics about those supporters’ views of President Barack Obama. In September, Public Policy Polling reported that 61 percent of Trump supporters believe Obama was not born in the United States.

Mobile-home living ranked as having the third-strongest correlation to support for Donald Trump, according to The Times.

The overwhelming majority of Trump supporters earn less than $50,000 and have not benefited from stock market improvements, according to MarketWatch. Trump has blamed their lack of success on bad trade policies and immigration policies that have taken old economy jobs, along with government policies on healthcare, taxes, and guns.

There is also a strong correlation between Trump supporters and support of past third-party candidates, The Times said, noting that “Trump territory showed stronger support for the segregationist George Wallace in the 1968 election than the rest of the country, and substantially weaker support for the liberal-leaning former Republican John B. Anderson in 1980.”

This variable has a negative correlation to Trump support, but the Boston Globe reported that polls indicate 54 percent of Republican union households support Trump. Still, union leaders have expressed concern about the GOP front-runner, The New York Times reported in January.

There are few immigrants in the places where Trump has the strongest support, The Times article suggests. Many Trump supporters think “too many immigrants are bending the rules and even have a leg up on American-born citizens,” CNN noted.

Support for Trump among the evangelical community has surprised pundits, Talking Points Memo said, noting that Trump’s stances on abortion and gay issues — along with the fact that he is twice-divorced — seem to run counter to the values of evangelicals. But Trump won 34 percent of the evangelical vote in South Carolina, the website noted.

9. *History of voting for liberal “Republicans”

This variable showed a negative correlation to Trump support, which may come as a surprise considering opponents’ efforts to position Trump as liberal. But their ads touting his backing of such things as Planned Parenthood, universal healthcare, and Obama’s economic stimulus package have done little to sway Trump’s loyal supporters, according to Vox.

Another negative correlation was this traditional Republican base, which hasn’t showed strong support for Trump. In mid-January, only 5 percent of Republican pastors polled said they would vote for Trump, Religion News reported. Ted Cruz was the top choice in that survey.