2 Jews Assaulted and Beaten by Gang of 40 in Paris

Anti-Semitic violence continues to spike in France as two Parisian Jews beaten in broad daylight on Paris street with many Jewish stores. 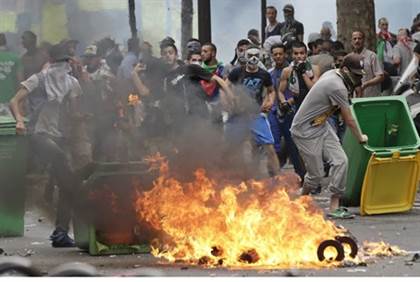 In the latest violent anti-Semitic incident in France, two Jewish residents of Paris last Friday were assaulted on a street in the city in the early afternoon by a gang of no less than 40 people, according to JSS News.

The two Jews, both aged in their 20s, were assaulted on Boulevard Voltaire located in Paris’s 11 arrondissement in broad daylight at around 2:30 p.m., indicating how low the deterrence against anti-Semitic assaults is in Paris despite police efforts.

Their assailants were from the anti-Israel groups Gaza Firm and the BDS (boycott, divestment and sanctions) movement, according to security guards in the Jewish community. The exact condition of the two victims was not clear from the report.

Paris police began an investigation of the assault, warning local Jewish business owners on Boulevard Voltaire to be aware of possible attacks in aftermath of the anti-Semitic attack on teh street.

Members of the Jewish community reportedly volunteered to help guard the numerous Jewish run businesses on the street.

Vicious assaults against Jews in France have become a tragically common occurrence, with one French Jew beaten last Saturday as he left a synagogue in Paris.

A watershed incident occurred in January when the kosher Hypercacher supermarket was taken hostage by an Islamist terrorist who murdered four Jews before being eliminated by police.

In response France posted soldiers to guard Jewish institutions around the country, although a recent UN panel last Tuesday condemned France for “trivializing” anti-Semitism and hate speech, indicating that not enough has been done.