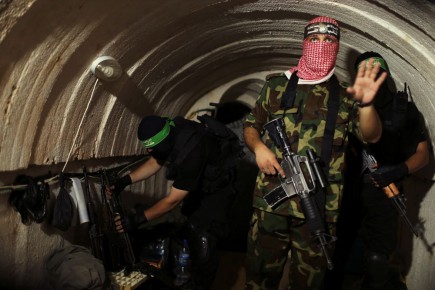 CAIRO (Ma’an) — Egyptian border guards claimed Sunday to have uncovered a 2.8 km-long tunnel under the yards of three homes in Rafah near the Gaza border.

Egyptian military sources told Ma’an that the tunnel was three meters underground and was being used to smuggle people, ammunition, weapons and goods.

They said it was the longest tunnel uncovered between Egypt and the Gaza Strip since the start of operations near the border to crack down on smuggling.

Earlier this month, the Egyptian army said it had demolished over 1,000 houses in Rafah as part of the second stage of the establishment of a buffer zone along the border.

After a bombing killed more than 30 Egyptian soldiers in the Sinai in October 2014, the military stepped up the campaign to build the buffer zone amid accusations of Hamas support for the group that carried out the attack, which Hamas has strenuously denied.

Both sides of the border are densely populated as the city of Rafah originally extended in both directions, a growth that was the result of the Israeli occupation of the Sinai Peninsula for more than a decade following the 1967 war.

The border area used to be host to hundreds of tunnels which Gazans used to import goods to get around the seven-year-old Israeli siege of the territory.