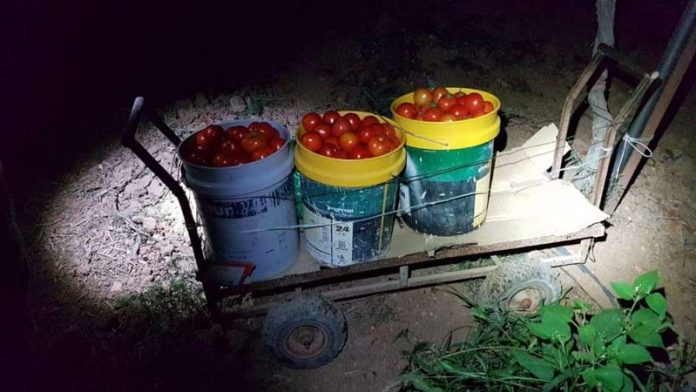 Sixty-seven Illegal residents from the PLO, 40 minors and 27 adults, were arrested Saturday night by Border Police in Moshav Shekef in the Lakhish Regional Council in south-central Israel, for what police termed the largest attempted theft of agricultural produce in recent years in that region.

Dozens of tons of agricultural produce were seized during the arrests, in the community’s greenhouse area, which the suspects allegedly were about to haul off. Border Police investigators estimate that the suspects picked between 20 and 24 tons of grapes and between five and seven tons of tomatoes.

Among those arrested were 40 minors and 27 adults, most of whom are residents of the village of Beit Awwa in souther Judea, near Hebron, who are suspected of planning to sell the stolen produce in their village market. The minors were returned to the village and released, while the adult detainees were transferred for interrogation.

The suspects picked the grapes and tomatoes and carried them in buckets and boxes to several vehicles waiting outside the security fence. Four vehicles used by the suspects were confiscated.

The Border Police officers who were deployed to the site estimated that the suspects had been harvesting the produce for several hours. The same suspects also inflicted great damages on greenhouses and other property, allegedly to hurt the owners.

The Border Police force that arrived at the site has begun the documentation of the damages, to formulate an evidentiary basis for indictments against the suspects, as well as to examine the manner in which the suspects arrived and crossed the security fence.