Abbas Builds Himself a $13 Million Royal Palace with 2 Helipads

The project appears on the website of a PA council which begs foreign countries for money. 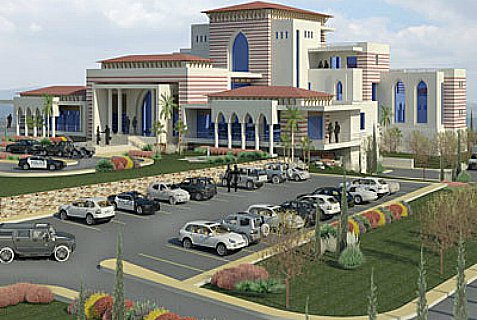 The PLO is planning to build a $13 million “Presidential Guest Palace in Ramallah with “self-financing” although the project committee states that one of its missions is make sure money flows into its coffer from foreign countries.

The European Union and the United States are two of the biggest philanthropists for the  PLO, which has pocketed billions of dollars.

PA chairman Mahmoud Abbas uses the money to pay for a bloated civil service and police force, which numbers far beyond the limit set in the once-upon-a-time Oslo Accords. The PA budget also pays terrorists who land up in Israeli jails for killing or trying to kill Jews.

The PLO uses EU funding to pay Arabs to move the remote outposts in Judea and Samaria where they build props of tents and buildings to claim they have been living there for centuries.

It is not clear exactly where the U.S. aid goes. For example, the U.S. State Dept. has refused to comment on whether its aid will be used to guarantee the $10 million bond, along with another million bucks a month, that the PLO must post during its appeal against a mammoth lawsuit victory by victims of terror and by their relatives.

Now comes the new palace, which is to be built in two years. The website of PECDAR, the acronym for the [so-called] “Palestinian” Council for Development and Reconstruction, states:

The construction process includes also preparing the surrounding area and two helipads, the project will be constructed over a land area of 27,000 square meters [6.67 acres].

Then comes the kicker:

Source of Funding: Self Financing- Ministry of Finance

The PLO is begging every month or so for donors to help it pay salaries, but the $13 million for the Presidential Place and Guest House is self-financed?

PECDAR might have a new definition for the term “self-financing.” Its mission, according to its site, includes:

Coordinating the flow of international assistance for the benefit of the “Palestinian” people.

Identifying investment projects and other activities to be financed by the donor countries.