Israeli journalist Gal Berger, posted on social media on Sunday, Nov. 2, what he claims is a condolence letter from the acting leader of the [so-called] “Palestinian” Authority, Mahmoud Abbas, to the family of  Muataz Hijazi.

The man about whom Abbas took the time to send an official condolence letter died in a shoot out with Jerusalem police who came to his home in Abu Tor the day after the attempted assassination, in order to question and, presumably, arrest him. As the police approached Hijazi’s home, gunshots rang out from the house and in the ensuing gun fight, the suspect died.

Hijazi spent 11 of his 32 years in an Israeli prison for acts of terrorism. He was a member of the terrorist organization Islamic Jihad.

Gal Berger is the “Palestinian” Arab affairs reporter for the Voice of Israel radio. Berger posted that Abbas’s office confirmed the condolence letter was sent to the family of the terrorist.

UPDATE: Tal Shalev, of i24 News reporting that Netanyahu furious with Abbas:”While we’re trying to calm down the situation, Abbas sends condolences to someone that tried to commit a heinous murder.” 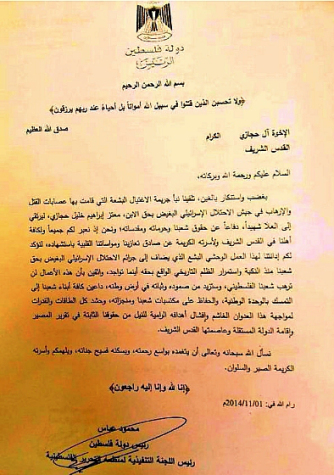