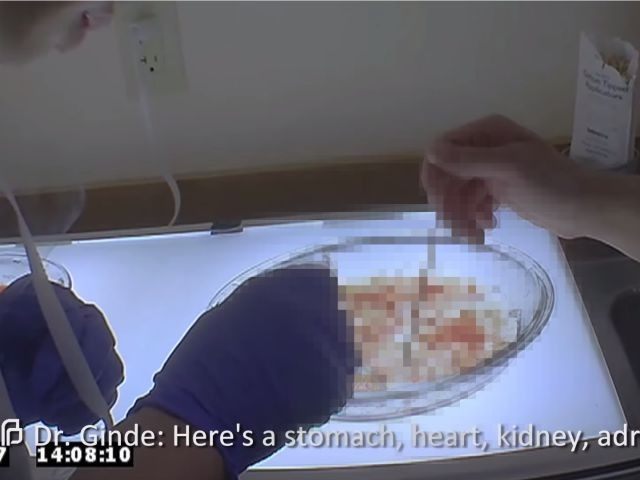 Some baby-parts videos, produced by the Center for Medical Progress, have been leaked by Congressional staff and placed on YouTube. The footage had been blocked by a California judge.

Only a few hours have been leaked, out of more than 100 hours taped, according to David Daleiden, founder of CMP. But in the few hours there are three moments that advance the case that aborted baby organs are a part of abortion clinic revenue streams.

Breitbart News exchanged email with Daleiden and his board member Troy Newman of Operation Rescue this afternoon. Neither seemed to be aware that the videos had been leaked. For CMP to participate in such a leak would have violated a Federal court order. Both seemed to get the news of the leak from the Breitbart email exchange.

That only a few hours were leaked leaves open the possibility that up to a hundred more hours may leak out over the next days and weeks.

One video shows a woman whose face is obscured talking about “financial incentives” for tissue donation.

Yet another video shows a woman identified by Daleiden as Lisa Harris, Medical Director for Planned Parenthood Mid-South Michigan, talking about supplying fetal eyeball in exchange for grant money.

In July, when Daleiden began releasing videos of Planned Parenthood personnel negotiating the buying and selling of aborted baby-parts, the National Abortion Federation reacted by asking a U.S. District Judge to block any videos that may have been taken at its annual conference. The abortion trade association charged that Daleiden got into the conference under false pretenses and broke a confidentiality agreement by surreptitiously taping various conversations and panels. The judge agreed and blocked the release, at least temporarily.

However, at least one Congressional Committee has been interested in the blocked videos, and the judge determined that his temporary restraining order could not apply to a separate branch of government.

Most of the videos are of panels, including one on how to get rid of fetal cadavers, and another about “self-care” for abortionists. In the video, the abortion industry presents itself as beleaguered by the protesters outside its doors almost every day, but also by increased government regulations that make the abortionists’ professional lives more difficult.

It is also clear from one panel that abortionists are weary of being looked down on by others in the medical profession. Abortionists are very aware there is a stigma attached to their work.

One video shows Daleiden in his hotel room preparing to roam the halls looking for people to talk to. It shows him adjusting his recording equipment. He is seen in a hotel room mirror wearing fake glasses and then wandering outside encountering various abortion professionals to whom he would introduce himself as Robert Sarkis of BioMax Procurement Services, the company he made up to gain access to abortion providers.

The videos were first leaked to Charles Johnson and posted on his Youtube page.