After jihad massacres, Pope Francis to Egypt to “reach out to Muslims” 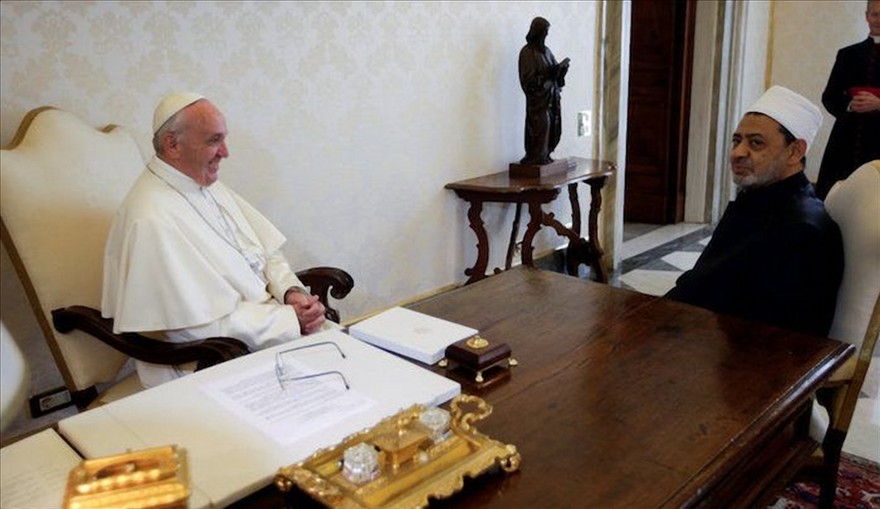 This Pope is a communist Islam suck-up who believes fake global warming and “interfaith dialog” with terrorists is more important than the millions of Christians brutally murdered at the hand of Muslims. Birds of a feather…

Here’s an idea. How about reach out to your own religion that’s being brutally mass-murdered and exterminated by Muslims. I guess that doesn’t fit in to his agenda.

“A main reason for the trip is to try to strengthen relations with the 1,000-year-old Azhar center that were cut by the Muslim side in 2011 over what it said were repeated insults of Islam by Francis’s predecessor, Pope Benedict.”

What did Benedict say? Andrea Gagliarducci of the Catholic News Agency explains that after a jihad terrorist murdered 23 Christians in a church in Alexandria 2011, Benedict decried “terrorism” and the “strategy of violence” against Christians, and called for the Christians of the Middle East to be protected.

Al-Azhar’s Grand Imam, Ahmed al-Tayeb, whom Pope Francis welcomed to the Vatican in May, was furious. He railed at Benedict for his “interference” in Egypt’s affairs and warned of a “negative political reaction” to the Pope’s remarks. In a statement, Al-Azhar denounced the Pope’s “repeated negative references to Islam and his claims that Muslims persecute those living among them in the Middle East.”

Benedict stood his ground, and that was that. But in September 2013, al-Azhar announced that Pope Francis had sent a personal message to al-Tayeb. In it, according to al-Azhar, Francis declared his respect for Islam and his desire to achieve “mutual understanding between the world’s Christians and Muslims in order to build peace and justice.” At the same time, Al Tayyeb met with the Apostolic Nuncio to Egypt, Mgr. Jean-Paul Gobel, and told him in no uncertain terms that speaking about Islam in a negative manner was a “red line” that must not be crossed.

So Pope Benedict condemned a jihad attack, one that al-Azhar also condemned, and yet al-Azhar suspended dialogue because of the Pope’s condemnation. Then Pope Francis wrote to the Grand Imam of al-Azhar affirming his respect for Islam, and the Grand Imam warned him that criticizing Islam was a “red line” that he must not cross. And he hasn’t, and won’t. But all those who think that it’s marvelous that the Pope is “respectful” and refuses to “poke them in the eye” should remember: Benedict’s supposed insults to Islam were denunciations of jihad attacks on Christians. Pope Francis won’t be so indelicate.

“Pope to Egypt to Mend Ties With Islam but Conservatives Wary,” by Philip Pullella, Reuters, April 25, 2017 (thanks to David):

VATICAN CITY (Reuters) – Pope Francis hopes to mend ties with Muslims on his trip to Egypt on Friday but faces criticism from church conservatives for meeting Islamic religious leaders after a spate of deadly attacks against Christians.

In a video message to the people of Egypt on Tuesday, Francis said the world had been “torn by blind violence, which has also afflicted the heart of the your dear land” and said he hoped his trip could help peace and inter-religious dialogue.

Security is a primary concern less than three weeks after 45 people were killed in attacks on Coptic Christian churches in Alexandria and Tanta, claimed by Islamic State, on Palm Sunday.

But Francis has insisted on using an ordinary car during his 27 hours in Cairo, continuing his practice of shunning armored limousines in order to be closer to people.

A main reason for the trip is to try to strengthen relations with the 1,000-year-old Azhar center that were cut by the Muslim side in 2011 over what it said were repeated insults of Islam by Francis’s predecessor, Pope Benedict