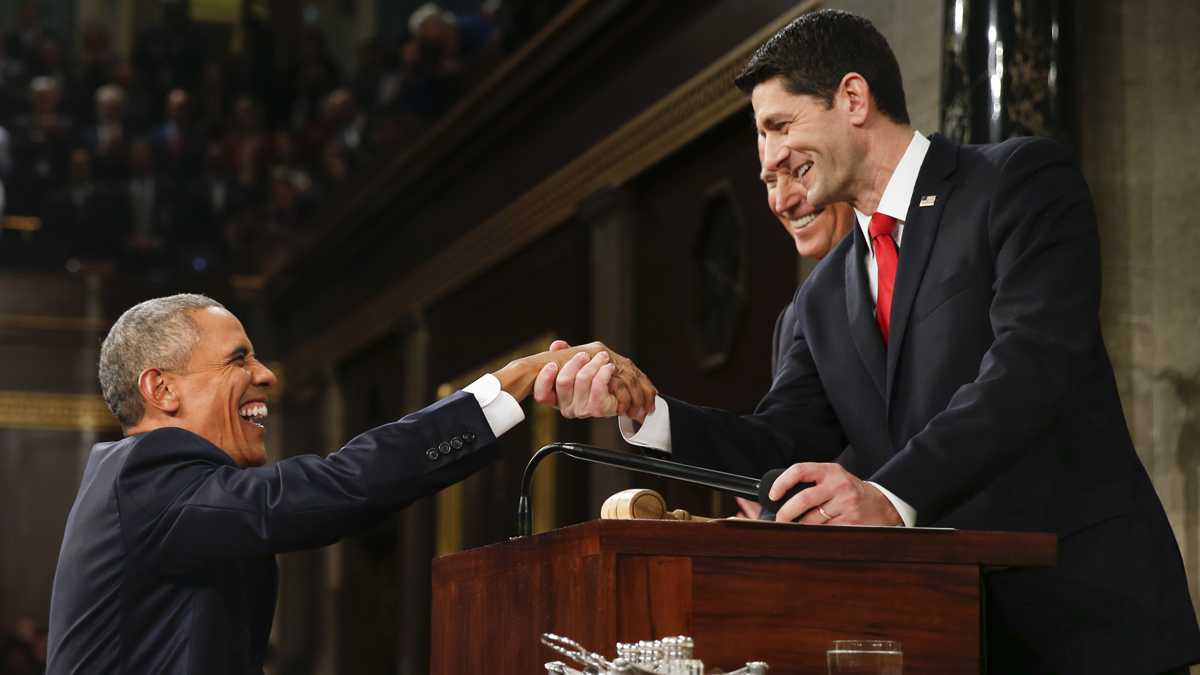 The omnibus bill also funded sanctuary cities, illegal alien tax credits, and changed federal law to allow for a massive increase in low-skilled H-2B workers– an immigration expansion opposed by more than nine in ten GOP voters. Yet at the first gathering of all House Republicans since the omnibus’s passage, Politico reports that GOP lawmakers gave Ryan a standing ovation at the close of this week’s Republican Congressional retreat.

Politico writes: “Retreats like this week’s pow-wow at Baltimore’s Inner Harbor are typically contentious affairs. For the past four years, lawmakers used it as an occasion to scream at John Boehner and Eric Cantor. During their last session here, however, Ryan got a standing ovation as he made commitments to [pursue] big ideas.”

Yet neither John Boehner nor Eric Cantor joined Barack Obama to expand Muslim immigration in to the United States– a distinction which is uniquely Paul Ryan’s.

The Politico piece, entitled “House Republicans Happy For Once,” notes specifically that Republican lawmakers “feel good” about Ryan’s policies– a distinctly different sentiment than the one held by the GOP electorate:

Ryan laid out those policies—which he described as a “bold, pro-growth agenda”—in this week’s Republican address. The policies– which read like the usual Republican clichés espoused throughout Ryan’s career– will focus on five areas: health care, “poverty and opportunity,” “constitutional authority,” national security, and “jobs and economic growth”.

Interestingly, nowhere in Ryan’s priorities is the topic of immigration mentioned– even though Paul Ryan views mass immigration as part of his vision for growing the economy, along with passing President Obama’s unpopular trade policies.

In fact, Ryan even avoided addressing the subject of immigration when discussing his national security priorities. While Ryan notes that Republicans will boost national security by focusing on “building a 21st-century military,” he makes no mention of stopping the large-scale visa issuances to Muslim migrants.

Similarly in his discussion of restoring “Constitutional authority,” Ryan declares that the “president’s executive overreach has undermined the Constitution.” What Ryan fails to mention is that his omnibus spending bill fully funded President Obama’s still fully-operational 2012 executive amnesty for illegal immigrants who allegedly came to the country as minors.

Moreover, Ryan’s office put out a press release detailing that the Republican Party’s agenda of “jobs and economic growth” will focus on “ideas to fix our tax code, rein in the regulatory state, and maximize our energy potential.” Ryan’s office makes no mention of easing or reversing the unprecedented flow of low-wage labor into American communities, nor did Ryan’s office explain how he plans to “fix our tax code [and] rein in the regulatory state” while importing large numbers of migrants who favor big government policies. A 2012 Pew Hispanic Center survey found that 75% of Hispanics and 55% of Asians prefer bigger governments that provide more services as opposed to smaller government that provide fewer services. A separate Pew report notes that 68% of Muslims in America “say they prefer bigger government providing more services… over a smaller government providing fewer services.”

Before the Congressional retreat, Sen. Jeff Sessions (R-AL), Chairman of the Senate Immigration Subcommittee, along with Congressman Rep. Dave Brat (R-VA), warned Republicans against pursuing the agenda to which Paul Ryan seems wedded.

The two lawmakers penned a “Dear Colleague” letter, which was hand-delivered to every Republican Congressional office, arguing against the open border immigration policies Ryan has pushed throughout his career. The lawmakers even referenced one of Ryan’s catch phrases specifically by name:

As our conference prepares to hold its annual policy retreat, we would like to share some thoughts on the one policy that most separates the views of the GOP’s voters from the party’s biggest donors: immigration… If we want to lay out a ‘bold, conservative agenda,’ and demonstrate that we serve the voters—and not the special interests—we should begin by advancing bills to reduce out-of-control immigration. That is the reform our voters want, and that is what we must deliver.

In their letter, Sessions and Brat provide some historical context on the nation’s federal immigration policy:

After the numerically-smaller 1880-1920 immigration wave, immigration was reduced for half a century. There was no net increase in the immigrant population over a fifty-year period—in fact, the foreign born population declined substantially between 1920 and 1970.

In the fifty years since visa caps were lifted in 1965, the level of immigration in the country has quadrupled—from fewer than 10 million foreign-born residents in 1970 to more than 42 million today. Over the next five decades, Pew Research projects immigration will add another 103 million to the U.S. population—or the population equivalent of 25 cities of Los Angeles. That would mean 100 straight years of uninterrupted record-breaking immigration growth. This autopilot immigration flow is not only extreme, but ahistorical.

Interestingly, this bit of immigration history was omitted from the Republican Party’s State of the Union rebuttal, as well as Nikki Haley’s subsequent press tour– during both of which she repeatedly touted the mythology that America’s history was built upon continued immigration. Both Brat and Sessions criticized Haley’s national address.

In an interview with New England radio host Howie Carr, Sessions described the GOP’s State of the Union rebuttal as not so much an attack on Donald Trump as “an attack on the voters.” Sessions said:

I know great Americans– great Americans– who love this country, and they are not happy with what’s going on in Washington. And so what do we hear? [Sessions imitates Haley’s speech:] ‘Oh, don’t be unhappy. You know, you’re just angry and scared and nativist, and you’re being seduced by these loud voices.’ I don’t like that message. I think we should listen to what people are telling [us]… We need to be listening to our constituents, not lecturing them.

Brat similarly criticized the party’s rebuttal– telling The Hill, “The Republican speech and President Obama’s speech both had the same thesis, which is an attack on one person.”

As Sessions and Brat had explained in their “Dear Colleague” letter, which was circulated prior to Haley’s State of the Union response:

The enormity of what is happening is somehow being lost on our political leaders. But it is not lost on the American people. Today, after five decades of record immigration, a record number of Americans are not working. The share of men in their prime working years who do not have jobs has tripled since the late 1960s. Workplace participation for women has declined more than three full percentage points since 2000. Median household incomes today are $4,000 less than they were fifteen years ago… Absent visa reductions, the annual rate of immigration, the total level of immigration, and the percentage of the country that is foreign-born will continue surging every single year.

While Paul Ryan and donor-class favorite Marco Rubio (R-FL) have been Congress’s most ardent champions of mass immigration and illegal alien amnesty, polling data reveals that the vast majority of Republicans would like to see immigration reduced rather than expanded. As Sessions and Brat write:

Ninety-two percent of GOP voters oppose this immigration growth, Pew reports. A microscopic 7 percent of GOP voters say they’d like to see more immigration. And yet party elites continue pushing for more—with no recognition of, let alone concern for, its impact on workers… How can it be possible that the demands of 92 percent of our electorate are not merely ignored, but sabotaged? The last legislation put forward [i.e. the Rubio-Schumer bill] would have tripled green card issuances over the next ten years—a population of new permanent residents almost seven times larger than the population of South Carolina.

Ryan’s omitting immigration from the Republican agenda seems to further underscore the growing divide between the Party’s voter base—who have propelled Donald Trump in the polls as the Party’s frontrunner— and the Republican lawmakers who give Ryan standing ovations on Congressional retreats.

Indeed, Trump has soared in the polls as he continues to campaign on a platform of putting an end to the open borders trade and immigration policies that have been championed by Ryan-Rubio Republicans and their donors.

In fact, as The Hill reports today, “Speaker Paul Ryan (R-Wis.) is emerging as Republicans’ biggest counterweight to Donald Trump.” The Hill cites Ryan’s condemnation of Trump’s call for a temporary pause to Muslim migration, as well as his recruitment of Nikki Haley to deliver the State of the Union rebuttal— in which she attacked the policies of the GOP frontrunner and urged the continuation of mass migration.

Ryan’s decision to posture himself as a “counterweight” to Trump seems in keeping with Republican leadership’s longstanding practice of ignoring—and even publically condemning— the desires of their constituents.

As the Republican National Committee wrote in their “autopsy report” following Paul Ryan’s failure to help Mitt Romney win the 2012 Presidential election, “We must embrace and champion comprehensive immigration reform. If we do not, our Party’s appeal will continue to shrink to its core constituencies only.”

Tucker Carlson recently explained that Republican Party leaders and donors not only disagree with Republican primary voters, such as evangelical Christians, but actually “They hate them.” Carlson said:

Indeed, it is hard to imagine the Democratic National Committee complaining about only representing the interests of its “core constituencies”– such as immigrant groups or Black Lives Matter– and urging Party lawmakers to drop their commitment to some progressive values so that they are not stuck with only their “core constituencies.”

This perhaps explains why the “happiness” found by Congressional Republicans seems so radically disconnected from the current reality for many of their constituents.

A recent study by Princeton economists revealed that white, middle, and working class Americans without a college degree are experiencing a rapid rise in morbidity. The report found that the rise in their death rates was tied to what the New York Times describes as, the “pessimistic outlook among whites about their financial futures”.

“Only H.I.V./AIDS in contemporary times has done anything like this,” Deaton told the New York Times.

As President of the Steelworkers Union, Leo Gerard recently explained in an op-ed in opposition to the open borders trade agenda championed by Paul Ryan, Marco Rubio, and Barack Obama:

Unemployed, desperate and despairing, these once-middle-class workers are killing themselves at unconscionable rates with guns, heroin and alcohol-induced cirrhosis… The cause of the self-slaughter, the researchers suggested, is financial strain. Bread winners couldn’t pay their bills and couldn’t foresee a future when they could. That is because jobs in manufacturing and construction – jobs that had provided middle-class incomes for workers without college degrees for decades – disappeared.