Angry Ferguson Protesters: “They Promised Us $5,000 a Month”

Protesters who looted, rioted, burned buildings, and overturned police cars in Ferguson, Missouri, last year were promised payment of up to $5,000 per month to join the protests. But organizers stiffed them, resulting in new protests to demand payment.

At least some of the 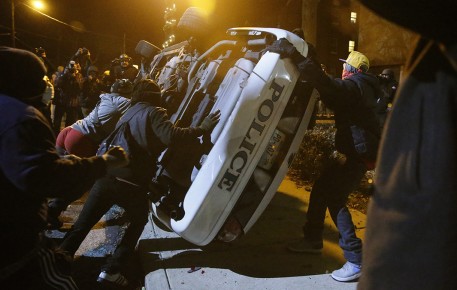 protesters who looted, rioted, burned buildings and overturned police cars in Ferguson, Missouri, last year were promised payment of up to $5,000 per month to join the protests.

However, when the Missourians Organizing for Reform and Empowerment (MORE), the successor group to the now-bankrupt St. Louis branch of ACORN (Association of Community Organizations for Reform Now), stiffed the protesters, they launched a sit-in protest at the headquarters of MORE and created a Twitter page to demand their money, the Washington Times reports.

Presidential candidate and former Rep. Allen B. West, R-Fl., noted on his website, “Instead of being thankful for getting off the unemployment line for a few weeks and having a little fun protesting, the paid rioters who tore up Ferguson, MO, are protesting again.

“First of all, can you even imagine getting paid $5,000.00 a month for running around holding a sign and burning down an occasional building? That’s around $1,250.00 per week. Try making that at McDonalds or Starbucks.”

The Kansas City Star estimates that the Ferguson riots, characterized as a spontaneous eruption of anger over the shooting of unarmed black criminal Michael Brown by Ferguson police officer Darren Wilson, cost the county $4.2 million.

Millennial Activists United (MAU) posted a letter on their website stating, “On May 14, 2015 many individuals and organizations of the protest movement that began in Ferguson, Missouri, organized a sit-in in the office of Missourians Organizing for Reform and Empowerment (MORE). The demand was simple: Cut the checks.

“Questions have been raised as to how the movement is to sustain when white non-profits are hoarding monies collected of off (sic) black bodies? When we will (sic) hold the industry of black suffering accountable? The people of the community are fed up and the accountability begins here and now,” the letter continues.

“There is an insidious strand of racism and white supremacy that exists in this movement. This money is typically in the hands of white people who oversee the types of services that the non-profit provides, while having select token black people to spearhead the conversations within and to the community.”

The OSF, the Times states, paid for activists from various protest groups from to travel to Ferguson and take part in the demonstrations.

Akiba Solomon of Colorlines stated, “More than 500 of us have traveled from Boston, Chicago, Columbus, Detroit, Houston, Los Angeles, Nashville, Portland, Tucson, Washington, D.C., Winston-Salem, North Carolina, and other cities to support the people of Ferguson and help turn a local moment into a national movement,” the Times noted.

“There’s absolutely no doubt that part of the reason that Ferguson flared up was because protesters were being paid to be there. That makes you wonder how many are being paid in Baltimore? How many more will be paid in the future?” The Right Scoop asked.

“The unpaid rent-a-mob operatives complain that MORE stiffed them the same way ACORN did to hired protesters throughout its 40 years of radical left-wing rabble-rousing,” FrontPage Mag reports.