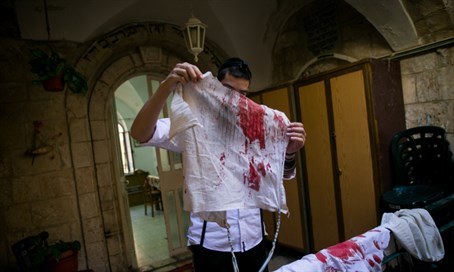 A 29-year-old haredi man was attacked by an Arab terrorist in Jerusalem on Friday afternoon, suffering stab wounds to the upper body.

The victim, who was light wounded, was stabbed at the Jaffa Gate of Jerusalem’s Old City, a popular tourist site in the capital.

He was given first aid treatment by Magen David Adom (MDA) paramedics, and evacuated to hospital.

Security forces set off in pursuit after the attacker, and caught him soon afterwards in an Old City alley. The 19-year-old terrorist, who is a resident of Qabalan, north of Ramallah in Samaria, was brought in for investigation. An official said the terrorist did not seem to have a permit to be in sovereign Israeli territory.

MDA evacuated the victim to Shaare Tzedek Hospital in the city for medical treatment. The hospital later reported he was stable and suffering a superficial stab wound to the shoulder, and was undergoing checks for internal bleeding.

“He communicated with me and said that as he walked he suddenly felt a stab. I gave him initial treatment to stop the bleeding” before an MDA ambulance arrived. Mazaro classified the victim as being moderately wounded and in stable condition, although a later MDA report said the injuries were light.

A number of attacks have taken place this week as part of the ongoing terror wave. On Friday morning an Arab terrorist threw a pipe bomb at a female Israeli motorist near Otniel in southern Judea. Light damage was caused to the vehicle but the driver managed to flee the scene.

On Wednesday morning there was a two-front shooting attack in Jerusalem in which two Arab terrorists driving in their car shot and seriously wounded an Arab resident of the capital, mistaking him for a Jew.

The uptick in attacks began on Tuesday, when a series of attacks took place including a stabbing spree in Jaffa (Yafo) in which ten were wounded and US tourist Taylor Force was murdered; a stabbing in Petah Tikva in which a Jew was moderately wounded but managed to kill his attacker; and a shooting attack in Jerusalem in which two officers were seriously wounded.

In response to the surge in attacks, in a Security Cabinet meeting on Thursday night it was decided to patch breaches in the Jerusalem security barrier and to build an additional security fence near Hevron – but no additional significant decisions to crush the current wave of terror were made by the Cabinet.