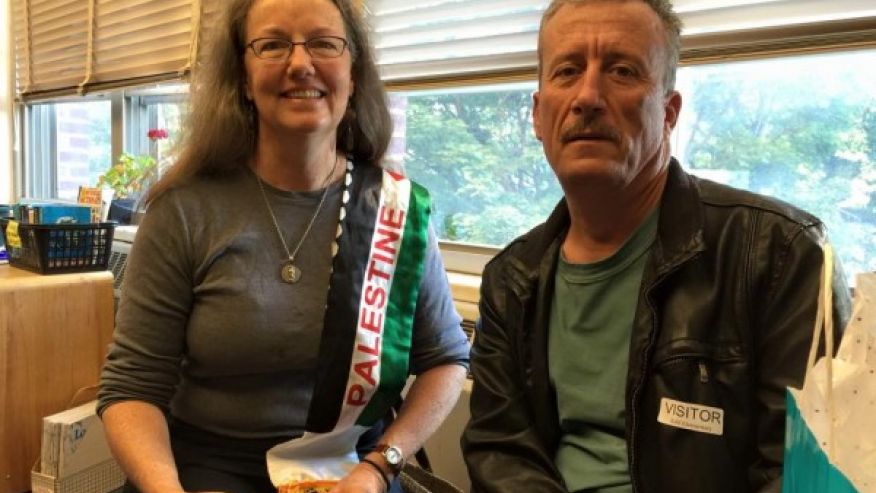 Anti-Israel activists are gloating on social media that they were able to get [so-called] “Palestinian” activist Bassem Tamimi—who is known for encouraging [Arab Muslim] children to confront Israeli soldiers so he can capture the interactions on video—invited to give a presentation to a third-grade Ithaca classroom.

Social media posts from those involved speak to the overtly political nature of Tamimi’s talk.

Mary Anne Grades Flores, a local political activist who accompanied Tamimi to the school, posted on social media that “Bassem Tamimi, father of 4, of Palestine and 12 yr old Ithacan [________] Gold spoke to BJM 3rd graders about “Palestinian” children struggling living under Israeli occupation. I am a witness to the gentle way the discussion happened and I am a witness to what is happening in Palestine. Denial of Human Rights by Israel’s occupation of the West Bank and Gaza.”

As this video reveals, Tamimi’s work in Palestine consists in encouraging local [Arab Muslim] children—including his own son and daughter—to deliberately provoke Israeli soldiers by shouting at them, waving fists in their faces, at times even making physical contact, in hopes that they will react with force and the resulting videotaped encounter can be used to disparage the IDF.

Legal Insurrection, which reported on the story, describes his work:

Tamimi’s son, Mohammad, was the subject of a recent media frenzy after he threw rocks at Israeli soldiers and when they moved to arrest him, a soldier was set upon by local women and children, all as the video rolled. Rock throwing has become a serious problem, with numerous motorists killed and injured as a result, yet it is an activity Tamimi encourages (for which he has been arrested).

This all is a very dangerous exploitation that puts the children at risk. Yet Tamimi glorifies and encourages the use of children for such purposes…

In 2012, an Israeli court convicted Tamimi of recruiting protestors to throw stones at Israeli soldiers from the rooftops of an Arab Village in Nabi Saleh. A relative of his, Ahlan Tamimi, is known for escorting the 2001 Sbarro suicide bomber to the attack site. That attack killed 15 people.

Despite repeated inquiries from the media including Legal Insurrection’s William Jacobson, the school has yet to respond to questions about why Tamimi was allowed to give a one-sided political presentation to elementary school students and why the third grade class he visited was chosen.