Anti-Semite Bill Nye: Global Warming Could Be Solved if Cows Are Bred to Fart Less 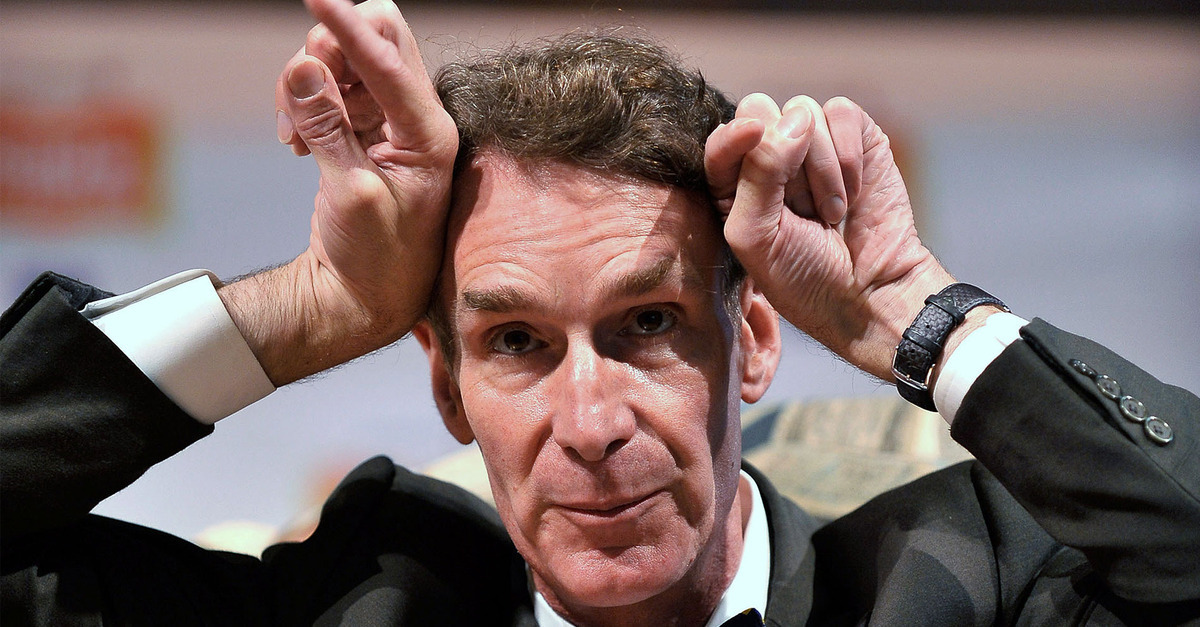 Bill Nye [who is NOT a real scientist but actually is an anti-Semite who also claims Jews don’t belong in Israel] produced a curious video on Wednesday, March 29, in which “the Science Guy” claimed that global warming might be solved by genetically engineering livestock to produce less of the methane greenhouse gas farted by animals ranging from cows to sheep or goats.

“Agriculture researchers are going to produce or breed farm animals that produce less methane by changing the bacteria that are in their stomachs,” Nye claimed. “To get all the way down to a plant-based diet might be tricky for a lot of people. However, it seems like a good idea.”

The video began with a question from a young woman named Erin from Scotland: “I went vegan after I watched documentaries like Before the Flood and Conspiracy, which presented me with lots of terrifying information.”

One study “suggests that 14 to 18.5 percent of the world’s global emissions are due to animal agriculture,” she stated. However, the liberal Worldwatch Institute “suggests it’s closer to 51 percent.”

“I was wondering if you knew why there was such a difference between these two figures and whether you think adopting a vegan diet is the best thing to do as individuals for the planet,” she concluded.

Erin, you raise a very good point. I don’t know why the two figures in those two studies, the documentary and the scientific paper, are discrepant.

But it probably has to do with trying to say or figure out how much greenhouse gas is created by cattle or other livestock.

“The problem, everybody, is that livestock eat plants, then bacteria in their livestock stomachs metabolize the plant material into methane, natural gas, and you can make all the jokes you want, but methane is a very strong greenhouse gas,” he stated.

“The first place I”d look to find the reasons for the discrepancy between the two figures is in the amount of greenhouse gas supposed to come from a cow or a sheep or a goat,” Nye continued.

“With the human population getting so big,” he noted, “we are raising so many farm animals.”

“It’s very reasonable that we’re creating a tremendous amount of extra methane that wouldn’t otherwise be there in the atmosphere,” Nye added, “and that is causing global warming and climate change to happen more rapidly than it would otherwise.”

“However, if humans weren’t there, animals would be all over the place anyway,” he stated. “It’s not clear that they’d be in these concentrations though.”

Nye then asserted: “It could be a difficult thing to measure, but it’s also reasonable that agricultural researchers are going to produce or breed farm animals that produce less methane by changing the bacteria that are in their stomachs that metabolize the plant matter.”

“To get all the way down to a plant-based diet might be tricky for a lot of people,” the Science Guy noted. “However, it seems like a good idea.”

Nye then stated: “Check in with me in a few months because I notice that my diet is becoming increasingly vegetarian, and so the next little while I may be all of the way over.”

Referring back to Erin’s original point, he noted: “It’s a very interesting question and an important one and literally a huge one because we’re talking about the Earth’s atmosphere.”

As NewsBusters previously reported, this isn’t the first time “the Science Guy” has promoted his views on “climate change” and was praised by members of the “mainstream media.”

In June of 2013, the New York Times hailed Nye as “a warrior for science,” and a month later, NBC called him “a firebrand for science” for his efforts promoting responses to global warming and climate change.

Nye “joined forces” with former Meet the Press anchor David Gregory in February of 2014 to denounce skepticismregarding global warming. In November of that year, CBS gave Nye a platform to denounce those who “deny” climate change.

A year later, Nye compared fighting climate change to “winning World War II,” but that didn’t stop the anchors on MSNBC’s Morning Joe program from slamming him for campaigning to enact conservation measures in America when countries like China and India do nothing to solve the “problem.”

In February of this year, the “Science Guy” got his own program on the Netfilx pay cable channel so he could target “religious leaders” and “climate change deniers.”

While methane is about 20 times as potent as carbon dioxide, Nye has a long way to go in convincing Americans that cow flatulence is damaging the planet’s atmosphere, which is hard for most people to say while keeping a straight face.