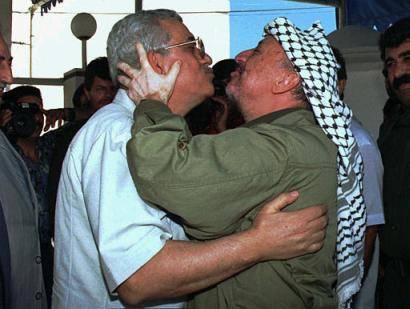 Islamic Movement officials have threatened Israel with a third intifada to begin on Sukkot, against the backdrop of so-called Israeli “attacks” at the Al-Aqsa Mosque on the Temple Mount [where Arab Muslims have been rioting and making bombs].

In an interview with a Turkish news agency, translated by The Middle East Research Institute (MEMRI), the Islamic Movement’s Northern Branch chairman Sheikh Raed Salah warned that “if Israel’s violations continue, a third Palestinian intifada will break out in the West Bank and Jerusalem.”

Salah, who was convicted in 2003 for funding Hamas, then called on the [PLO] to pressure Israel with international lawsuits, and also demanded that Jordan be more forceful in its condemnation of the Jewish state.

The Islamic Movement’s Jerusalem advisor, Ali Abu Sheika, also joined the act, warning of “a genuine intifada against the occupation in late September on Sukkot” as a result of the “critical and dangerous situation on Al-Aqsa.”

Several Joint List MKs, who have been quite vocal in their attacks on Israel’s attempts to defend itself against the [Muslim terrorists] violently rioting on the Mount, issued threats as well.

MK Jamal Zahalka said that “attacks on the Al-Aqsa Mosque have reached a dangerous point, in which no one can remain neutral. The occupied interior will generate furious actions at the end of the month when a wave of Jews come to Al-Asqa on Sukkot.”

MK Ahmed Tibi, meanwhile, warned that “[Prime Minister Binyamin] Netanyahu is playing with fire…Continued aggression against the Palestinians and their holy places will inflame a third intifada.”

Calling on Arabs in Judea-Samaria, as well as the rest of Israel, to riot, Tibi asserted that “we must block the streets of East Jerusalem and its alleys without thousands to undermine the attempts of settlers to enter the Al-Aqsa Mosque.”

Both Zahalka and Tibi have been directly involved in violent [Arab Muslim] riots on the Temple Mount and elsewhere over the past year.

[PLO] chairman Mahmoud Abbas has also threatened about the “risk of an intifada” over violence on the Temple Mount, telling Prime Minister Binyamin Netanyahu on Tuesday to “stop” the clashes and prevent “an intifada which we don’t want.”