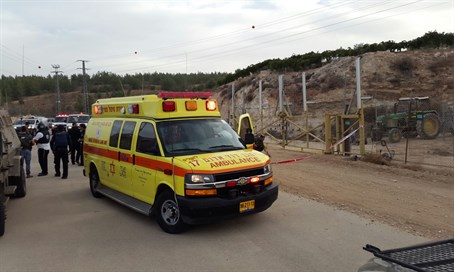 Arab terrorist stabs IDF soldier near Gevaot Checkpoint before being shot in the leg, taking advantage of farm work permission.

An Arab terrorist conducted a stabbing attack on Friday morning in the area of the Gevaot Checkpoint, located between Beit Shemesh and Gush Etzion.

The terrorist was shot in the leg and wounded in the incident, which took place when an IDF force opened the gates of the checkpoint for Palestinian Arabs who were coming to work on olive groves in the area.

The 17-year-old Arab terrorist managed to stab a soldier in the shoulder before being shot and arrested.

Magen David Adom (MDA) reports that the wounded man was fully conscious, and is lightly to moderately wounded. He was evacuated to Shaare Tzedek Hospital in Jerusalem.

The terrorist was evacuated to Hadassah Ein Kerem Hospital in Jerusalem in moderate condition after being shot in the leg. The attacker, a resident of the nearby Arab town of Surif, is being treated in the trauma ward and is fully conscious.

Zohar Maman, a paramedic with MDA, reenacted his arrival on the scene.

“When we arrived at the place we saw a youth around 26-years-old walking around fully conscious, with a superficial stab wound on his upper body,” said Maman. “We provided him initial medical treatment at the site including bandaging, and then evacuated him for continued treatment at the hospital with his condition classified as light.”

The attack in the region of Beit Shemesh comes just a day after another stabbing attack in the central city, in which two Arab terrorists from the Hevron region in Judea stabbed a haredi man as he exited a synagogue, lightly wounding him before being shot.

Residents of the city told Arutz Sheva that there is a growing fear due to the massive presence of illegal Arab workers, who may take advantage of their work to launch more attacks.