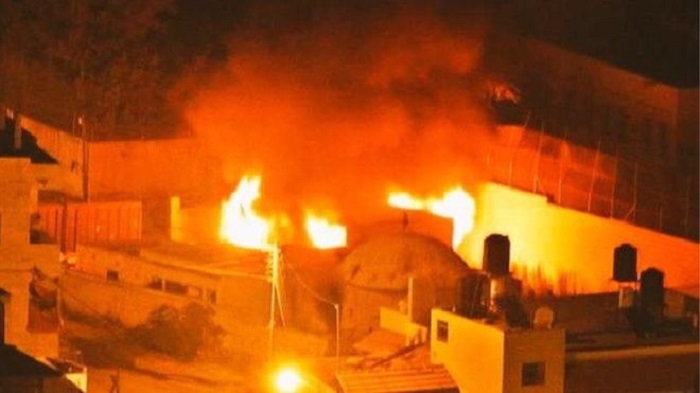 [Arab Muslim] rioters have set fire to Joseph’s Tomb. Firefighters extinguished the fire early on Friday morning but the site has been badly damaged.

Joseph’s Tomb is believed to be the burial place of the biblical Joseph, son of Jacob. It is located in the city of Nablus, which has been under [Arab] control since 1995. Jewish visitors are allowed to go to the site once a month, only at night with military protection.

In the night-time attack in Nablus, tens of [so-called] Palestinians overran the tomb, attacking it with petrol bombs…

Israeli military spokesman Lt. Col. Peter Lerner said the assault was “a blatant violation of the basic value of freedom of worship” and that Israel would “bring perpetrators to justice and restore the site.”

The tomb was also attacked in 2000 when [Arab Muslims] tried to burn it down. [They] also tried to set fire to it last year.

The fire comes on the heels of Israel’s crack down on the recent wave of stabbings and attacks on Israeli citizens by [Arab Muslim terrorists].

Only hours before the attack on Joseph’s Tomb, Israeli PM Benjamin Netanyahu called on [PLO] President Mahmoud Abbas to stop inciting violence. Abbas responded that Israeli aggression and the “occupation” was to blame.