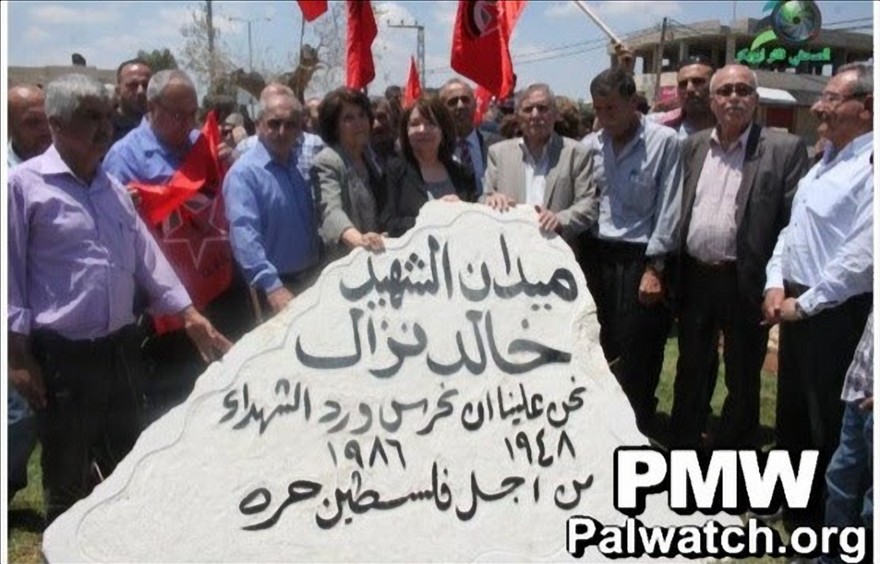 [Israeli Arab Muslims] on Saturday re-erected a monument set up in honor of a Palestinian terrorist in the town of Jenin, a day after it was bulldozed by the Israeli military.

The Jenin municipality last month named a square after “martyr” Khaled Nazzal, a Democratic Front for the Liberation of Palestine(DFLP) operative who planned a massacre in the northern town of Ma’alot in which Palestinian terrorists murdered 22 schoolchildren and four adults. It also erected a monument in Nazzal’s honor.

On Friday Israeli forces entered Jenin and removed the monument. During the operation, clashes broke out between soldiers and locals, during which one Israeli soldier was shot and moderately injured, while six Palestinian protesters were injured, one of them seriously.

In a statement, the group said, “Khaled Nazzal will remain alive and immortal in the conscience of his people, his comrades and all those struggling for the freedom and independence of Palestine.”

“Compromising” on Nazzal’s monument, the group argued in the statement, “will open for targeting all the symbols of our national movement and history.”

Palestinian media reports said soldiers entered Jenin early Sunday morning to demolish the monument for a second time, but a spokesperson for the Israeli military denied that.

The naming of the square and monument in honor of Nazzal sparked a harsh response from Prime Minister Benjamin Netanyahu, who accused Palestinian Authority President Mahmoud Abbas of lying about seeking peace and of “poisoning” the minds of young Palestinians.

Israel warned the PA that if the monument to Nazzal was not taken down, the IDF would enter Jenin to remove it.

Following the ultimatum the monument was briefly removed, but last week it was reinstalled under an agreement between Abbas’s Fatah party and the mayor of Jenin.

The PA and its ruling Fatah party have a long history of lionizing “martyrs” — a term given to any who dies at the hands of Israel, whether civilians or terrorists, with the latter often characterized as soldiers of the “resistance.”

The UN and Norway recently pulled support for a West Bank women’s center after it was revealed it had been named after a female terrorist. Numerous institutions and public spaces have been named in similar fashion.

Israeli officials have long complained that incitement and support from the PA in the form of praise, honorifics, and cash payments to the families of Palestinians killed during attacks encourages further terrorism.