Army Day in Iran: Cries of “Death to Israel and U.S.” 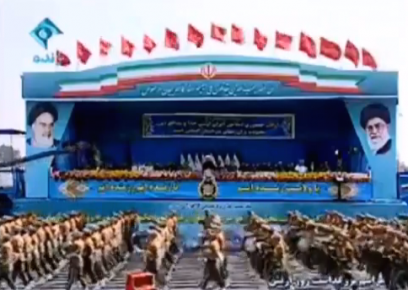 One would think that the ruling clerics of the Islamic Republic would moderate their hatred, anti-American, anti-Semitic, and anti-Western sentiments after President Obama and Secretary of State John Kerry handed the Iranian government a lot of compromises, a sweet nuclear deal, eased sanctions, and have turned a blind eye to Iran’s interventionist and expansionists policies.

In fact, it is the ongoing argument made by the leftists and liberals that building diplomatic ties with the Islamic Republic, reaching a nuclear deal with Tehran, and being quiet on the Islamic Republic’s regional policies and support for extremists proxies in the Middle East, will eventually tone down the ayatollahs’ position and make them responsible and rational actors.

However, Iranian leaders keep ratcheting up their anti-American and anti-Semitic sentiments, while the left keeps sticking to its failed argument. Last week, on Iran’s Army Day, the Islamic Republic introduced a new set of weapons, including Iran’s brand of the S-300 missile defense system, which is called Bavar-373. In addition, the Islamic Republic publicized a gigantic banner saying, “Death to Israel” and many officers and puppets of the Iranian regime shouted, “Death to America” and “Death to Israel.”

“If Israel makes a mistake, those in Tel Aviv and Haifa will not sleep at night, not one person,” a host on Iranian state television said during the festivities.

Most hypocritically, the deceptive face of the Islamic Republic, President Hassan Rouhani pointed out that Iran’s military power is not a threat to anyone. He stated:

On the other hand, Iran’s Senior Officials of the Islamic Revolutionary Guard Corps (IRGC), Quds Force (the foreign and paramilitary arm of the Revolutionary Guard), and Ministry of Intelligence and Security are infiltrating and intervening in almost every country in the Middle East.

Officers from the IRGC have been sent to Iraq, Syria, Yemen, Lebanon, and other nations to spread the ideological propaganda of the Islamic Republic and serve the national, geopolitical, strategic and economic interest of the mullahs.

The shrewd President of the Islamic Republic went on lecturing to other countries. He added:

Why don’t they make use of the opportunity created by our armed forces? What does it mean to supply financial and military aid to terrorists in Syria? What does it mean to attack Yemen? What objectives are they pursuing? Does attacking children bring you honor? You have planted the seeds of hatred in the hearts of regional people and would face its response sooner or later.

I think there is a clear answer to his questions. First, the Islamic Republic’s armed forces are engaged in all facets of supporting terrorist groups, intervening in other countries, and conducting business in the black market. So, is he asking other nations to “make use of the opportunity created by our armed forces” with respect to these crimes?

Secondly, is he lecturing other nations not to “supply financial and military aid” to oppositional groups in Syria? Well, it is the IRGC and the Quds forces which are militarily and financially supporting one of the worst war criminals in our generation: Bashar al Assad.

It is with the assistance of Iran that the Syrian regime is capable of bombing neighborhoods with children and women and continue torturing people in the tens of thousands.  If it were not for the military support of the theocratic regime of Iran, the uprising in Syria might have not even turned into a bloody sectarian civil war and it might not have not given birth to powerful terrorist and extremist groups such as Jabhat Al Nusra and the Islamic State.

The IRGC has managed to dominate other countries’ political and economic system through new form of control. For example, Iran has infiltrated the security and military ranks of the Syrian forces dominating the political developments more efficiently from top.  Although there is no concrete Iranian military base in Syria, but the Quds forces and the senior cadre of Iranian government have been repeatedly deployed to advise and conduct military operations on the ground. In addition, the military, economic, and intelligence assistance to the Assad government further bolsters Tehran influence in Syria.

In Iraq, Iran has implemented the same agenda securing the dominance of the Shiite government. Iranian forces are almost directing every aspect of the  battles and political process in Iraq through the Quds forces and its advisory mechanism.

When Iran’s army has not been capable of dominating a country from the top, Iran’s army has engaged in irregular warfare; making alliance with one or several Shiite extremist groups in the given nation or creating a new proxy by financing, arming, training and supporting a militia through the Quds Force and the IRGC.

Finally, is Rouhani hypocritically criticizing other nations for “planting seeds of hatred”? I think it goes without saying that it is the Iranian theocratic regime that has been planting seed of hatred for decades by spreading their anti-American and anti-Semitic agenda, as well as repressing their own people. All these suggest that it is the time for the leftists and liberals who believe in a moderate Islamic Republic to wake up.