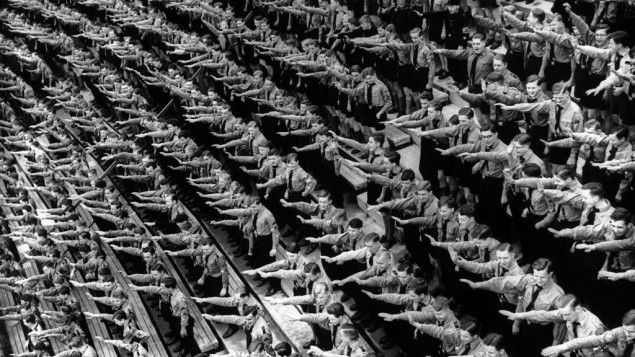 An Associated Press photograph shows some of over 132,000 members of the Hitler youth organisation assembled at the Olympic Stadium in Berlin, where German Chancellor Adolf Hitler and Dr. Joseph Goebbels addressed them, as part of the usual round of May Day festivities and demonstrations in Germany on May 1, 1939. The AP caption notes: ‘The Fuhrer arrives and the members of the Hitler youth organisation rise as one man to give the Nazi salute at the demonstration in the Olympic Stadium, Berlin.’

The Associated Press news agency willingly cooperated with Nazi Germany, submitting to the regime’s restrictive rulings on the freedom of the press and providing it with images from its photo archives to be used in its anti-Semitic and anti-Western propaganda machine, a new report reveals. 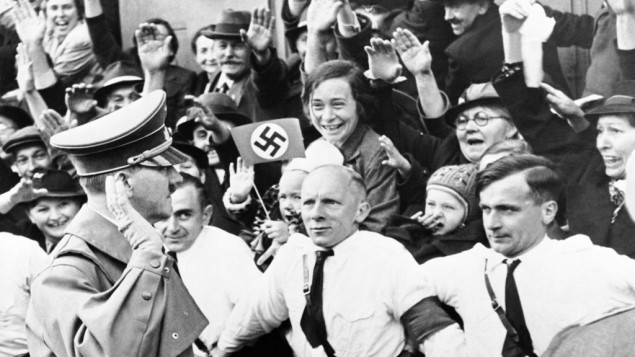 An Associated Press photograph shows Adolf Hitler, German Reichsfuehrer, acknowledging the ecstatic cheers of Sudeten Germans, as he entered Asch, on the heels of German armies which took over the ceded Czechoslovakian territory, on Oct. 3, 1938. The AP caption notes: ‘Party members grip each other’s belt, straining to hold the enthusiastic crowds in check.’

When Adolf Hitler’s National Socialists rose to power in 1933, all international news agencies but the US-based AP were forced to leave Germany. The AP continued to operate in the Third Reich until 1941, when the United States joined World War II. 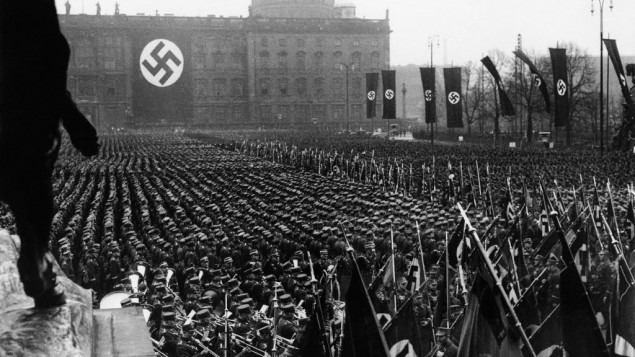 The Associated Press photographs the third anniversary of National Socialism’s accession to power in 1933 widely celebrated throughout Germany on Feb. 11, 1936. At noon, Adolf Hitler assembled 25,000 of his oldest stormtroop comrades in the Lustgarten in Berlin. In his address, Hitler reiterated Germany’s will to peace. This is a general view of the banner and flag bearers in Berlin.

According to German historian Harriet Scharnberg, the world’s biggest news agency was only allowed to remain in Germany because it signed a deal with the regime.

The news agency lost control over its copy by submitting itself to the Schriftleitergesetz (editor’s law), agreeing not to print any material “calculated to weaken the strength of the Reich abroad or at home,” she wrote in an article published in the academic journal Studies in Contemporary History. 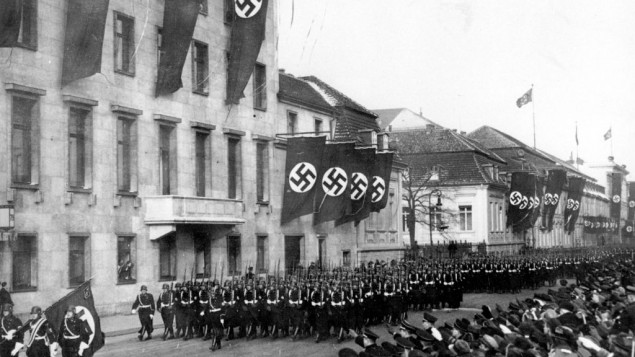 An Associated Press photograph shows a parade of Nazi black guards marching past the Reich Chancellory on Wilhelmstrasse during their parade in Berlin, Germany, on Jan. 30, 1937.

Scharnberg’s research was first reported by the UK-based Guardian newspaper.

According to the paper, the Nazis’ so-called editor’s law forced AP employees to contribute material for the Nazi party’s propaganda division. One of the four photographers working for the company in the 1930s was Franz Roth, a member of the SS paramilitary unit’s propaganda division. His pictures were handpicked by Hitler, the Guardian writes.

The AP’s images appeared in many of the regime’s propaganda publications. Most of the images in a pamphlet called “Jews in the US” were provided by the AP. In a different publication entitled “The Subhuman,” the AP provided the second-largest number of photographs, according to Scharnberg. 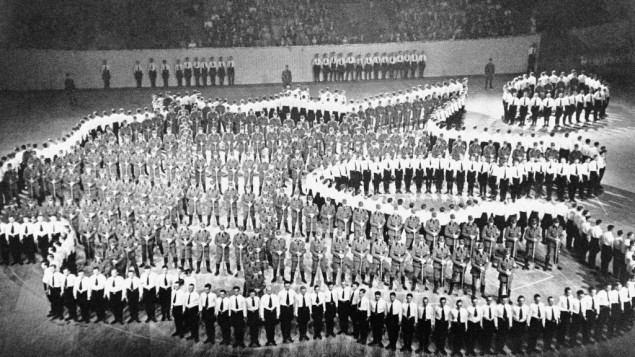 An Associated Press photograph shows what it calls men ‘making up this human map of greater Germany. They are members of Labor Service Corps at the International Handicraft Congress in Berlin, May 28, 1938. Those in white shirts represent the boundaries; those inside, in brown shirts, with spades, are intended to represent Germany’s network of auto roads. Note that the absorption of Austria is recognized. Note also the little island at the upper right representing East Prussia, and the deep dent at the right center where Czechoslovakia sticks its long neck into Germany.’

It is possible to argue that the AP’s agreement with the Nazis allowed the West a “peek into a repressive society that may otherwise have been entirely hidden from view,” the Guardian writes. On the other hand, the deal allowed to Nazis to cover up their war crimes. The cooperation with the prestigious American news agency allowed Hitler to portray his “war of extermination as a conventional war,” Scharnberg told the Guardian.

“Instead of printing pictures of the days-long Lviv pogroms with its thousands of Jewish victims, the American press was only supplied with photographs showing the victims of the Soviet police and ‘brute’ Red Army war criminals,” Scharnberg, a historian at Halle’s Martin Luther University, told the paper, citing one example of the agency’s work helping the Nazis. 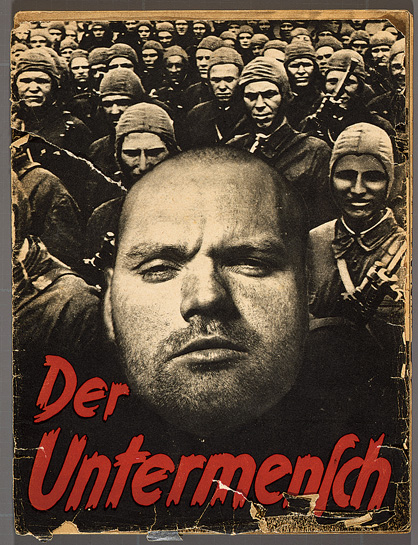 “To that extent it is fair to say that these pictures played their part in disguising the true character of the war led by the Germans,” she added. “Which events were made visible and which remained invisible in AP’s supply of pictures followed German interests and the German narrative of the war.”

Responding to the Guardian’s report, the AP said it would research the matter but rejected the notion that it deliberately collaborated with the Nazis.

“An accurate characterization is that the AP and other foreign news organizations were subjected to intense pressure from the Nazi regime from the year of Hitler’s coming to power in 1932 until the AP’s expulsion from Germany in 1941. AP management resisted the pressure while working to gather accurate, vital and objective news in a dark and dangerous time,” the agency stated.

AP later issued a lengthier statement, in which it said it “rejects the suggestion that it collaborated with the Nazi regime at any time.”