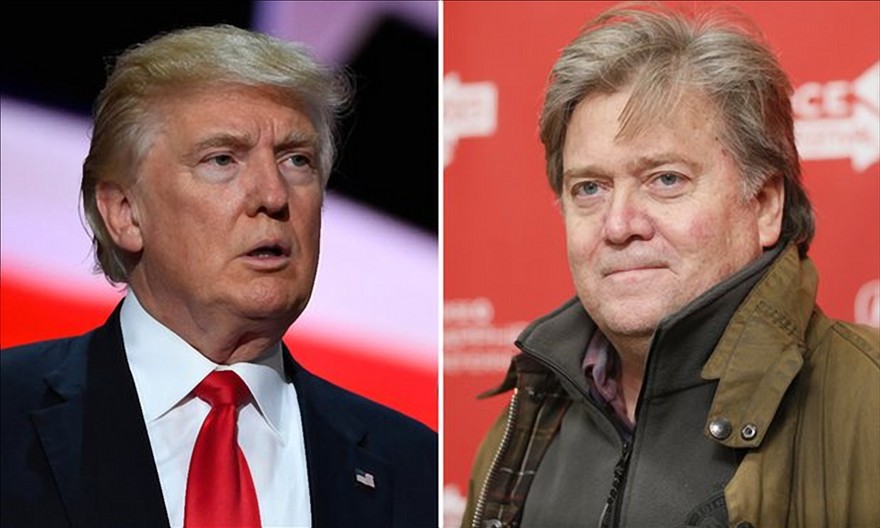 Former White House chief strategist Steve Bannon called a June 2016 meeting with a group of Russians attended by Donald Trump Jr. and his father’s top campaign officials “treasonous” and “unpatriotic,” according to excerpts of a new book seen by Reuters on Wednesday.

The explosive comments from a former close aide and far-right architect of Donald Trump’s November 2016 election victory roiled the White House and the Republican president, who famously values loyalty in associates and employees. Trump fired Bannon from his White House post in August and split with him on Wednesday in a highly personal public repudiation.

“Steve Bannon has nothing to do with me or my presidency. When he was fired, he not only lost his job, he lost his mind,” Trump said in a statement hours after Bannon’s comments emerged.

In the book, Bannon expressed derision and astonishment over the meeting at Trump Tower in New York in which a Russian lawyer was said to be offering damaging information about Democratic presidential candidate Hillary Clinton, according to the book “Fire and Fury: Inside the Trump White House” by Michael Wolff.

Bannon also was quoted as saying he was sure Trump Jr. would have taken the Russians who took part in the meeting to meet his father in Trump Tower. Trump Jr. arranged the meeting and Trump’s son-in-law, Jared Kushner, and then-campaign chairman, Paul Manafort, also attended.

The June 9, 2016, meeting has become part of federal special counsel Robert Mueller’s investigation of possible collusion between the Trump campaign and Russia in the election. Trump has denied any such collusion.

“The three senior guys in the campaign thought it was a good idea to meet with a foreign government inside Trump Tower in the conference room on the 25th floor – with no lawyers. They didn’t have any lawyers,” Bannon was quoted as saying in excerpts of the book seen by Reuters.

“Even if you thought that this was not treasonous, or unpatriotic, or bad shit, and I happen to think it’s all of that, you should have called the FBI immediately.”

Bannon also was quoted as saying, “The chance that Don Jr. did not walk these jumos up to this father’s office on the twenty-sixth floor is zero.” Jumo is a word meaning drunk.

When an intermediary proposed the meeting, saying the Russians were offering damaging information about Clinton, Trump Jr. responded in an email, “I love it.”

Bannon was incredulous about the meeting shortly after it was first revealed publicly, according to the book, concluding sarcastically, “That’s the brain trust they had.”

The Trump Organization did not immediately respond to a request for comment from Trump Jr. on the Bannon comments, first reported by the Guardian.

The book, due out next Tuesday, was based on more than 200 interviews with Trump, senior White House staffers and confidantes conducted by Wolff, a contributing editor for The Hollywood Reporter, according to publisher Henry Holt.

In a New York magazine article on Wednesday adapted from the book, Wolff described a campaign team looking forward to losing, from Trump and his family to staffers angling for profitable jobs after the election.

When it became clear on election night that Trump would win, Donald Trump Jr told a friend that his father “looked as if he had seen a ghost. Melania was in tears – and not of joy.”

U.S. intelligence agencies have concluded that Russia interfered in the 2016 election to try to help Trump win in part by hacking and releasing emails embarrassing to Clinton. Moscow has denied the allegation.

In the book, Bannon also said he believed the investigation into possible collusion between the Trump campaign and Moscow will focus on money laundering.

“They’re going to crack Don Junior like an egg on national TV,” Bannon was quoted as saying.

Manafort and business associate Rick Gates, who also worked on Trump’s campaign, pleaded not guilty in November to federal charges brought by Mueller including conspiracy to launder money and failing to register as foreign agents of Ukraine’s former pro-Russian government.

Bannon was scheduled to appear in the near future before the House of Representatives Intelligence Committee and will likely be questioned about the Trump Tower meeting comments, a congressional official said.

Bannon became Trump’s campaign manager in the months before the November 2016 election, but after the Trump Tower meeting. He served as chief White House strategist during the first eight months of Trump’s turbulent presidency.