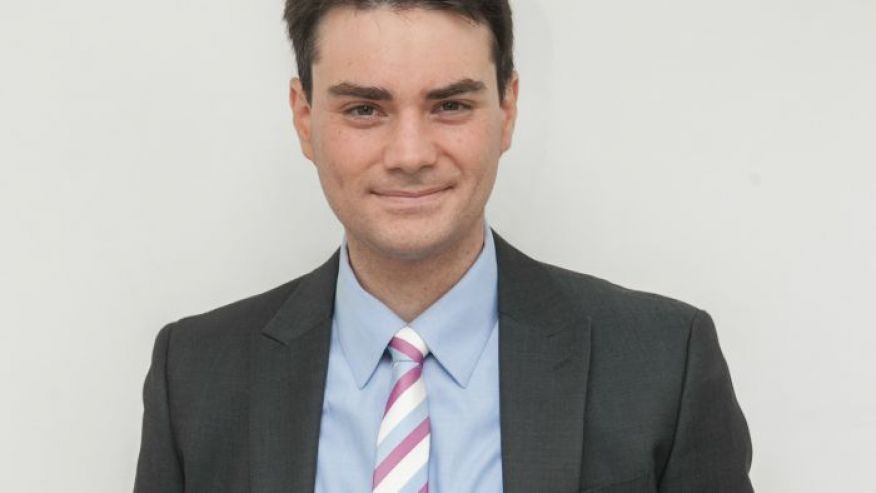 While co-hosting his KRLA 870 AM and KTIE 590 AM radio shows in Southern California, Shapiro said:

As you know, I’ve been agonizing on air over whether I would ever vote for Donald Trump. And I’m starting to come down firmly in the #NeverTrump camp. I will never vote for this man. I will not pull the lever for this man. I will not pull the lever for him in a general election or in a primary. It’s not going to happen. And the reason is that if conservatives never say “no” at some point, then they’re never going to have the opportunity to say “yes.” Because the logic of the Republican Party is, “the conservatives are going to be forced to vote for whomever we choose, that whomever we put out there, John McCain or Mitt Romney or Donald Trump, we’re going to put that person out there and we’re just going to make you vote for that person because they’re better than Hillary Clinton, or better than Barack Obama.” If you don’t say no at some point, gang, you’re never going to get a nominee to whom you can actually proudly stand up and say yes. You’re always going to be the sucker, because they can just take your vote for granted.

Asked later in the show about the possibility of Hillary being elected if conservatives failed to show up for Trump, Shapiro stated:

Am I willing to risk a Hillary presidency not to vote for Trump? The answer is yes. The reason the answer is yes is because I am not going to watch the only party that has a possibility of reflecting conservatism descend into this. I’m just not going to do it. I’m not going to be complicit in the death of the conservative movement at the hands of Donald Trump. If we’re going to have an opposition, let it be the opposition, let us not be our own opposition. I thought this whole battle was about taking the party back from the establishment. And so the idea is that we’re now going to hand it over to the one person who is going to destroy – he’s not going to destroy the establishment – but destroy the possibility of conservatism? In 1964, Republicans lost badly to Lyndon Baines Johnson. Without that happening, there is no Ronald Reagan. In 1976, they rebelled against Gerald Ford. Without that happening, there is no Ronald Reagan. So, if we actually want to have a conservative leader at any point in the future, not just an Arnold Schwarzenegger Republican, at some point we’re going to have to stand up on our hind legs and say no. And it seems to me starting with the guy who’s happy to appeal to a bunch of people who like the KKK, that starting with the guy who’s happy to talk about the size of his genitalia on national television and endorse Planned Parenthood, that starting with the guy who has undermined every conservative principle at some point during this race, that might be a good place to start. Because otherwise, your vote as a conservative doesn’t matter. Listen, if all you do is every four years, you just pull the lever for the guy who’s the least of two available options, the least bad of two available options, if that’s all you do, you’re never going to get somebody you actually like. All you’re going to have is the best of two bad options, and then the country just slides toward the cliff at 30 mph as opposed to 60.

Later in the day, at Daily Wire, Shapiro posted an essay on his decision to support the #NeverTrump movement:

I will never vote for Donald Trump because I stand with certain principles. I stand with small government and free markets and religious freedom and personal responsibility. Donald Trump stands against all of these things. He stands for Planned Parenthood and trade restrictions and targeting of political enemies and an anti-morality foreign policy and government domination of religion and nastiness toward women and tacit appeals to racism and unbounded personal power. I stand with the Constitution of the United States, and its embedded protection of my God-given rights through governmental checks and balances. Donald Trump does not. I stand with conservatism. Donald Trump stands against it…. Why in the world would conservatives live with President Hillary Clinton on their consciences?

Because first, it’s not on our consciences. It’s on the consciences of the people who went along with this nomination. We did not select Trump. We will not vote for him.

And if we are going to save the country, it will not rest on one or two justices on the Supreme Court. It will rest on the will of the people to resist tyranny. That will start at the state and local level. It will start with the people.

It will start with conservatives willing to say “no.”….

In every election cycle, the establishment insists that we unify behind a candidate who does not reflect conservatism because elections are always a choice between the two worst options. They blackmail conservatives into supporting candidates who undermine the message and morality of our mission. Now Trump does the same. The establishment created the Donald Trump phenomenon with their “best of two bad options” logic, and now Trump is using that logic to destroy conservatism openly. The establishment doesn’t object to Trumpism. They only object to Trump. Strip the drunken boor antics from Trump, and you’ve got John McCain who will lie transparently to pander to the populist wing….

Now is the time to say no.