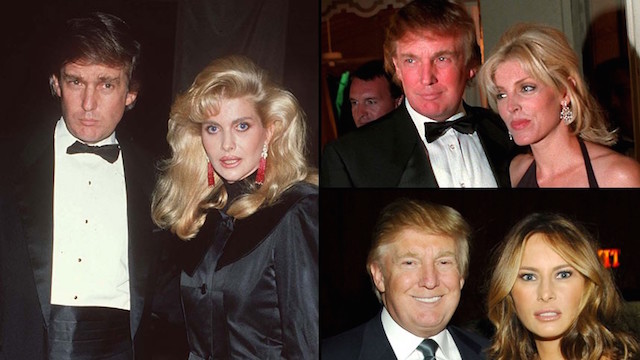 Gee, I wonder why?

Donald Trump is viewed negatively by almost three-quarters of married women in a potential general election and trails Hillary Clinton by double digits among those voters, highlighting his weakness in a key segment of the Republican base.

Seventy percent of married women who are likely general-election voters have an unfavorable opinion of the Republican front-runner, according to the Purple Slice online poll conducted by Purple Strategies for Bloomberg Politics. Almost 60 percent said the way Trump talks about women is offensive and embarrassing and makes him unacceptable as a presidential candidate, and more than half said the billionaire is setting a new low in negativity.

“The way Trump looks among married women puts Republicans in a deficit in a key group that they won before,” said Purple Strategies pollster Doug Usher. “Trump cannot win unless these numbers change.”

Women, particularly single women, tend to vote Democratic, but the married women subset has leaned more Republican. In the 2012 election, married women preferred Mitt Romney over President Barack Obama 53 percent to 46 percent, and since 1996 Republican presidential candidates have won the married women vote, according to Gallup.

See the questions and methodology here.

This poll, which also tested a group of married women who are Republican primary voters, shows that while none of the GOP candidates are faring exceptionally well among married women, Trump is particularly weak after politically damaging comments about women and abortion.

In a general-election match-up, the Democratic front-runner defeats Trump 48 percent to 36 percent, while against Texas Senator Ted Cruz, she is in a tie at 43 percent. In the Republican primary group, Trump leads his party’s candidates with 37 percent support compared with Cruz at 32 percent and Ohio Governor John Kasich at 25 percent. But of the three, Trump has the highest negative rating within his own party.

Surveys have indicated that Trump’s words may have begun to catch up with him after he made derogatory remarks about Fox News host Megyn Kelly and former rival Carly Fiorina, mocked Cruz’s wife, and said if abortion were outlawed, women who have the procedure should be punished. (He later reversed, saying doctors who performed abortions would deserve punishment.)

In the most recent presidential primary, in Wisconsin on April 5, exit polls found Trump lost badly to Cruz among women after he tied Cruz in that group in the March 8 primary in Michigan, a state with similar demographic and economic characteristics. (Trump also lost Wisconsin men.)

Among married women in the Bloomberg Politics poll, Democrat Bernie Sanders and Kasich had the highest positive ratings from likely general-election voters at 48 percent and 42 percent, respectively. Among married women who are Republican primary voters, Cruz led with 57 percent having a favorable opinion compared with 55 percent for Kasich and 52 percent for Trump.

While a majority of married women who are likely general-election voters said the way Trump talks is offensive and makes him unacceptable, 52 percent in the Republican group said he tells it like it is and values the input of strong women. The general-election respondents in the survey were evenly divided along party lines: 44 percent for both parties, including those who leaned toward each.

When asked about electing a woman president, most participants said the way they feel about the former secretary of state had nothing to do with her gender. Still, compared with Trump and Cruz, Clinton does best among married women who are likely general-election voters when asked who understands the challenges facing women like them, has the right temperament to be president, and would be a good role model for children.

Trump did best on the issue of combating terrorist threats at home and abroad, when participants were asked what traits described a candidate very well. Among married women who are Republican primary voters, Trump did better than Cruz on issues of strength, such as changing the way Washington does business, while Cruz was preferred on temperament.

A plurality in both groups said the word that best describes their feelings about the 2016 presidential election is “afraid.”