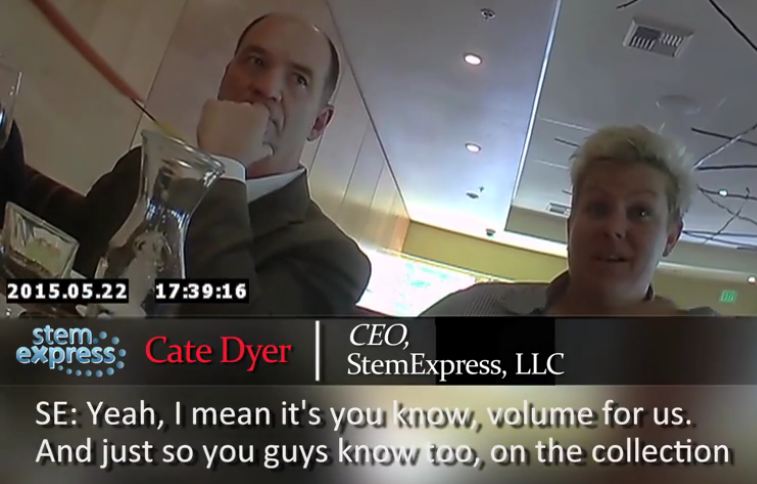 The words are from Cate Dyer, the CEO of StemExpress, which until just recently was a major partner with Planned Parenthood in the business of retrieving the body parts of unborn infants and selling them to researchers.

And it expresses her desire for more “supplies” for her business.

It’s from the eighth video released by the Center for Medical Progress, which set up a fake company and sent undercover video investigators to Planned Parenthood and other locations to investigate the business of selling infant body parts.

The new video reveals the stunning possibility that some aborted babies are being legally “born alive.”

Earlier videos have revealed Planned Parenthood executives callously negotiating for the best price for the remains of the unborn. One executive fretted about being “low-balled” and suggested if the prices should be higher, they could be adjusted.

She was the same executive who said, “I want a Lamborghini.”

The newest video, the eighth in the CMP series, was released after a judge in California ruled Friday that the organization had a First Amendment right to release it.

The judge also suggested that the conversation was private, even though it was in a public room in a restaurant, and that issue still may have to be litigated.

The StemExpress video reveals the company “gets a lot of intact fetuses” and suggests “another 50 livers a week” still would not be enough to meet demand, CMP said.

CMP explained StemExpress is a for-profit biotech supply company that has partnered with Planned Parenthood clinics across the country to purchase human fetal parts since its founding in 2010. StemExpress’ medical director, Dr. Ronald Berman, is an abortion doctor for Planned Parenthood Mar Monte in San Jose, California.

Dyer complains of a lack of supplies.

“So many physicians are like, ‘Oh I can totally procure tissue,’ and they can’t,” she said.

When asked about “intact specimens,” she states, “Oh yeah, I mean if you have intact cases, which we’ve done a lot, we sometimes ship those back to our lab in its entirety.”

CMP said “case” is the clinical term for an abortion procedure. An “intact case” refers to an intact abortion with a whole fetus.

The actor from CMP responds, “The entire case?”

“Yeah, yeah,” said Dyer. “The procurement for us, I mean it can go really sideways, depending on the facility, and then our samples are destroyed. … So we started bringing them back even to manage it from a procurement expert standpoint.”

CMP reported feticidal chemicals like digoxin “cannot be used to kill the fetus in a tissue procurement case, so a fetus delivered intact for organ harvesting is likely to be a born-alive infant.”

Asked what would make her happy, Dyer said: “Another 50 livers a week. We’re working with almost like triple digit number clinics and we still need more.”

She cites Planned Parenthood as “a volume institution.”

CMP notes that it’s a crime to change an abortion procedure to retrieve body parts and also to buy or sell human fetal tissue.

The Operation Rescue organization, whose president, Troy Newman, is on the board of CMP, noted the latest video.

“There can be no doubt of the profit motive behind Planned Parenthood’s participation in the illegal selling of aborted baby remains. If they say otherwise, they are just trying to deny their part in criminal conduct. Right now, everyone at Planned Parenthood is trying to save their own hides from criminal prosecution, so they’ll never admit to anything,” said Newman.

Dyer also discusses, as WND reported immediately after the judge’s ruling on the video Friday, that shipping neutral tissue is difficult. The solution is to ship babies’ severed heads intact.

“And I mean, we’ve actually had good success with that,” she said.

She also describes why many researchers are squeamish about using fetal tissue.

“Because they sort of want to get away from having to publish a picture – a paper that says this was derived from fetal tissue,” she explained.

Newman said there are ethical and moral issues with experimenting on human tissues derived from aborted babies.

“It is completely different than handling adult tissues,” he said.

“Babies can’t consent. Their remains are treated as a commodity, not with the respect of a human being. There is something innately exploitive and morally troubling about using baby remains in this way.” He said. “It is a fact that exploitive human experimentation on murdered people took a toll on the Nazi doctors during World War II. There is plenty of historical precedent to warn us against such barbarity. In truth, there are other ways to conduct beneficial research other than abusing the remains of pre-born babies.”

WND also has reported that as horrific as the videos appear, they should surprise no one, since such practices have been documented for nearly two decades already.

A price list uncovered by a pro-life organization dated June 1998 shows that the price per specimen from a second trimester abortion is $90 fresh and $130 frozen.

Mark Crutcher, whose Life Dynamics organization was a ground-breaker in investigating the abortion behemoth that gets some $500 million annually from U.S. taxpayers, worked on that investigation.

His group reported back in February 2000 how the baby parts market works: “A baby parts ‘wholesaler’ enters into a financial agreement with an abortion clinic in which the wholesaler pays a monthly ‘site fee’ to the clinic. For this payment, the wholesaler is allowed to place a retrieval agent inside the clinic where he or she is given access to the corpses of children killed there and a workspace to harvest their parts.”

He continued: “The buyer – usually a researcher working for a medical school, pharmaceutical company, bio-tech company or government agency – supplies the wholesaler with a list of the baby parts wanted. … when such orders are received … they are faxed to the retrieval agent at the clinic who harvests the requested parts and ships them to the buyer.”

The documentation was provided at that time to Life Dynamics by a worker who left Comprehensive Health for Women, a Planned Parenthood abortion clinic in Overland Park, Kansas.

Among the documents was a “Fee-for-Services” Schedule A, effective June 1998, which outlined a charge of $220 per specimen for first-trimester aspiration abortions and $260 if the baby parts were frozen.

He also sold three orders of blood from the unborn child. The retrieval agent “harvested all of the parts,” the report said, explaining that “in order for the blood of an aborted child to be sold, the dead baby had to be brought to him intact.”

The “specimens,” the report said, would have generated up to about $25,000 in revenue for one month from one retrieval agent at one Planned Parenthood business.

Crutcher reported that the tissue logs reveal that one baby is often chopped up and sold to many buyers.

For example, babies taken from donors 113968 and 114189 were both killed late in their second trimester and cut into nine pieces. By applying the price list, buyers would have been invoiced between $3,510 and $5,070 for these parts, he said.