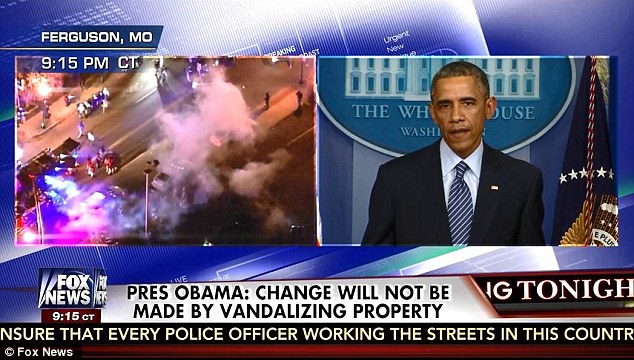 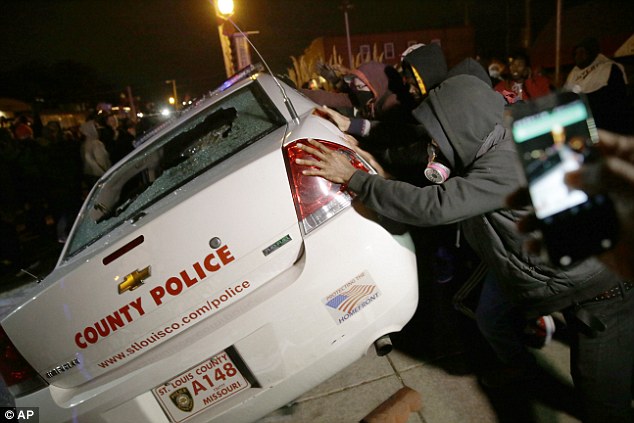 After members of a grand jury determined that police officer Darren Wilson will not face criminal charges related to the death of 18-year-old Michael Brown on August 9, peaceful protests spiraled out of control. Obama spoke to the nation a half-hour later.

The president said anger is an ‘understandable reaction’ from people who believe ‘the law is being applied in a discriminatory fashion,’ a reference to Wilson being white and Brown being black.

‘What we need to do is try to understand them,’ Obama said. 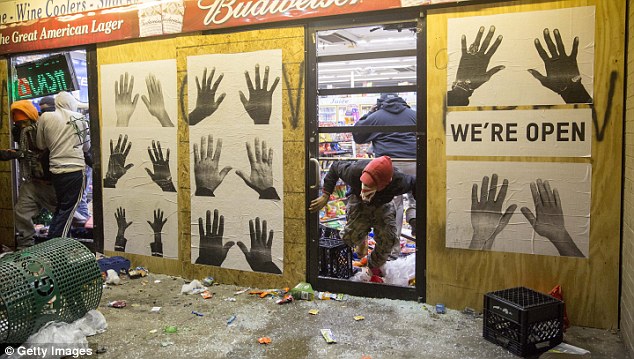 And referring to a growing feeling of distrust between urban blacks and mostly white police forces, he warned that healing the rift ‘won’t be done by smashing car windows. That won’t be done by using this as an excuse to vandalize property. It certainly won’t be done by hurting anybody.’

‘There is no excuse for violence,’ he said.

‘Those who are only interested in violence and just want the problem to go away should realize that we have work to do here.’

As the president spoke, cable news channels broadcast split-screen views of an imperturbable Obama on one side and angry reactions on the other. 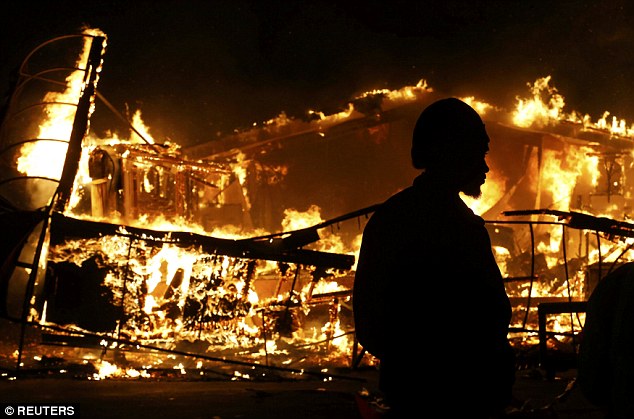 In one shot, dozens of protesters were seen trying to overturn a squad car not far from police headquarters. Thy dispersed only when tear gas canisters erupted. 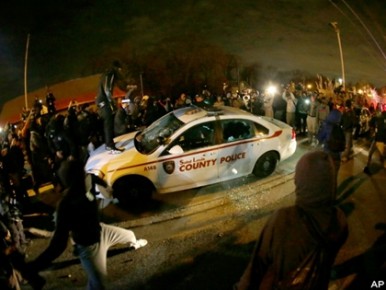 In another, rioters threw rocks and bottles and set fires as Obama counseled ‘care and restraint in managing peaceful protests that occur.’

Police ‘need to work with the community, not against the community,’ he said, indicating his desire to see law enforcement isolate violent instigators – many of whom traveled to Missouri from great distances – and a larger group of people ‘who want to protest peacefully.’

‘The fact is,’ he said, ‘in too many parts of this country a deep distrust exists between law enforcement and communities of color. Some of this is the result of the legacy of racial discrimination in this country.’

‘And this is tragic because nobody needs good policing more than poor communities with higher crime rates. We need to recognize that this is not just an issue for Ferguson, this is an issue for America.’ 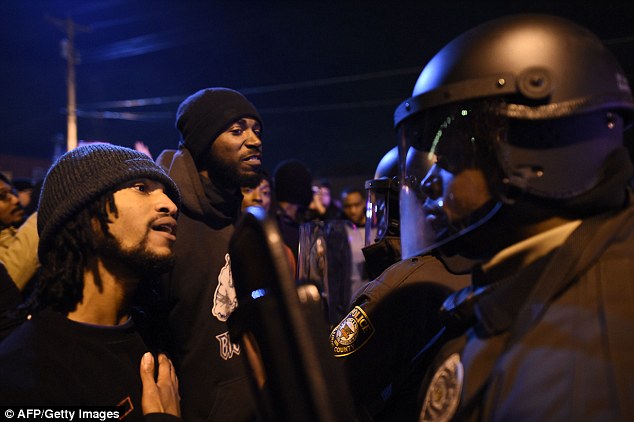 The Missouri grand jury’s decision isn’t binding on the Department of Justice in Washington, where outgoing Attorney General Eric Holder still could charge him.

It’s possible that Wilson could still face a federal trial and a long prison sentence. That would still be the case even if he had been acquitted in a state-level court. 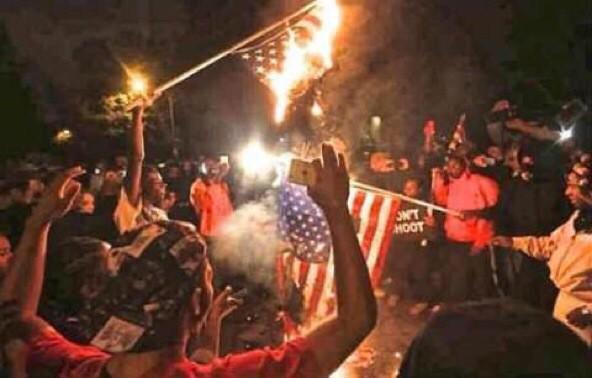 Missouri Democratic Sen. Claire McCaskill hinted at a second bite at the apple for the government in a statement issued after the news broke, saying Missourians should ‘await the conclusion of … [an] independent investigation’ being undertaken by the DOJ before passing judgment.

But on Monday the president firmly legitimized the 12 citizens, nine white and three black, who heard evidence over a stretch of weeks and decided it didn’t add up to an indictment.

‘First and foremost, we are a nation built on the rule of law, and so we need to accept that this decision was the grand jury’s to make,’ Obama said. 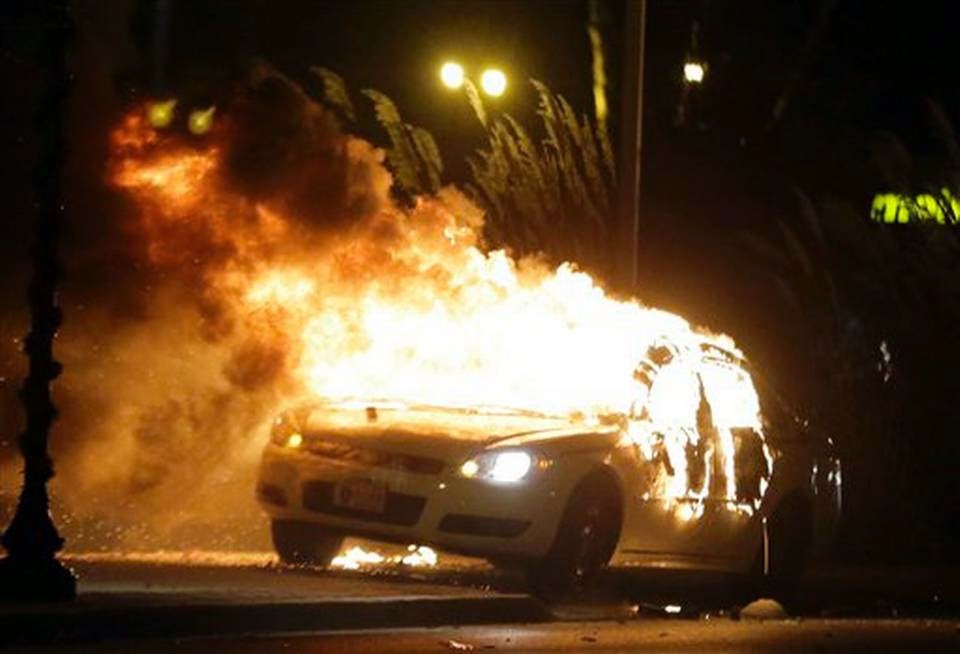 Obama has not said whether he, like his attorney general, would personally visit Ferguson. He left that possibility open on Monday.

‘Let’s take a look and see how things are going,’ he said in response to the one question he took.

‘Eric Holder’s been there. We’ve had a whole team from the Justice Department there. And I think that they have done some very good work.’

The grand jury process is different from a courtroom trial. It’s conducted in secret and without balance between the government and a potential defendant.

Unlike in a trial, where a jury must assign guilt beyond a reasonable doubt, the grand jury must only decide whether or not there’s a rational reason – a ‘probable cause – to believe that a crime was committed and sufficient evidence to bring the case to court.

Despite taking place in that far more prosecution-friendly environment, the grand jury’s determination means that the weight of the prosecution’s case was too weak to sustain charges.