A Muslim delivery driver used his rides to scout the largest U.S. air base in Britain, all the while planning to run over an American serviceman, kill him with a knife and detonate a suicide vest, according to UK prosecutor Mark Dawson.

Authorities in Britain charged two Muslim relatives on Tuesday with terror-related offenses, alleging that one was plotting an attack against U.S. military personnel in the UK and the other planned to go to the Middle East to join ISIS.

“He was planning a car accident-style attack to run over a serviceman and use a knife to kill that serviceman, and to do so, certainly had in mind the wearing of a suicide vest”

Dawson told the court that both men indicated a plea of not guilty. Their next court date is set for Aug. 18 and they’ve been remanded to custody, according to the UK Daily Telegraph. 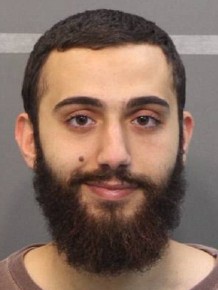 The news comes less than a week after a Muslim killed five service members at a military facility in Chattanooga, Tenn.

“He was planning a car accident-style attack to run over a serviceman and use a knife to kill that serviceman, and to do so, certainly had in mind the wearing of a suicide vest,” Dawson said, according to the Telegraph.

Junead Ahmed Khan, 24, is accused of trying to plan the attack sometime between May 10 and July 14, officials said. Khan and his uncle, 22-year-old Shazib Ahmed Khan, are also charged with planning to travel to Syria to join ISIS, according to a statement from the Crown Prosecution Service.

Sky News reported that the men were arrested a week ago in a joint operation between Bedfordshire Police and the Metropolitan Police Counter Terrorist Command Unit and that armed police were involved in one of the arrests. Police say searches were carried out at two addresses in the Luton area as part of the operation which forms part of an ongoing investigation into Islamist-related terrorism. Luton, north of London, has a large Muslim population and a history of terror-related arrests stemming from [Muslim] elements of the population.

Junead reportedly monitored U.S. air bases along his delivery route and sought to buy a knife like the one used by notorious ISIS killer “Jihadi John,” the Telegraph reported, adding his preparations were at an “advanced stage.” One of the  bases Junead targeted, Lakenheath, is the largest U.S. military operation in the UK. It’s home to 5,000 members of the military and their dependents, which number near 10,000. Lakenheath is about 60 miles from Luton.

A U.S. official told Fox News that Lakenheath is on a heightened terror alert and is taking precautions to safeguard the security of Americans there, but the official would not comment directly about the new alleged terror plot or if the increased precautions were due to the plot.

A large Fourth of July gathering of troops and families was cancelled due to “local terror threats,” the official told Fox News. The arrests of Junead and Shazib occurred 10 days after the cancelled event.

The attack Junead allegedly planned closely mirrored how British soldier Lee Rigby was murdered in May 2013. In that case, two Islamic [terrorists] crashed their car into Rigby and then used a machete-like knife to viciously stab him to death.

“We have concluded that there is sufficient evidence and it is in the public interest to charge Junead Khan and Shazib Khan with the intention of committing acts of terrorism,” said Deborah Walsh, of the Crown Prosecution Service. “It is alleged that Junead Khan and Shazib Khan had been planning on travelling to Syria to join the proscribed organization Islamic State in Levant.

A third man in his 30s was also arrested but released without being charged on Monday evening.