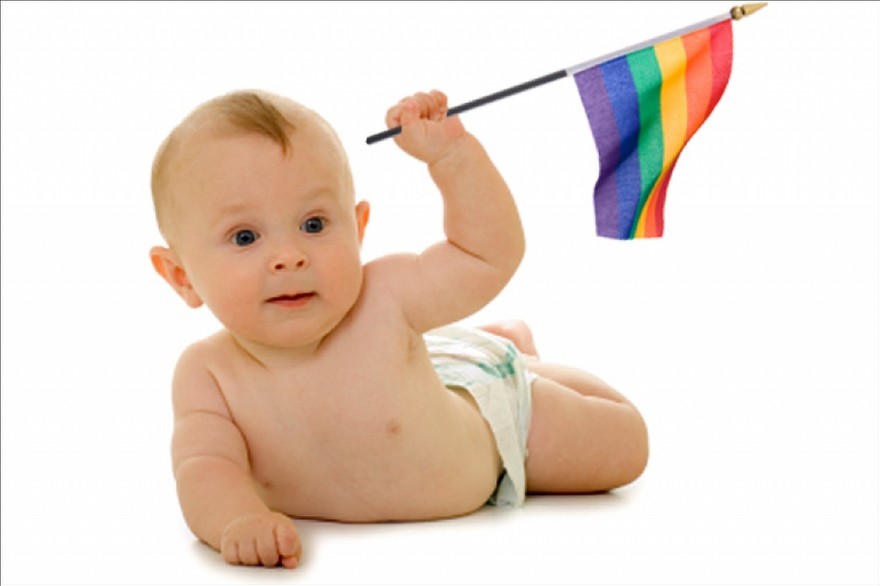 Just recently, California became a sanctuary state, and two new, dangerous bills were signed into law. One makes it illegal to refuse to call nursing home residents by other than their preferred pronoun. The other bill “lowers from a felony to a misdemeanor the crime of knowingly exposing a sexual partner to HIV without disclosing the infection.”

And all of these were finalized just this month.

Now another bill just signed into law is forever changing the definition of established, biological characteristics in favor of feelings.  Senate Bill No. 179 addresses gender identity, and it is another perilous step in the wrong direction.

The L.A. Times reports, emphasis mine.

Californians will soon be able to identify as non-binary, as opposed to male or female, on their driver’s licenses and birth certificates, under a measure signed by Gov. Jerry Brown on Sunday.

State Sen. Toni Atkins (D-San Diego) touted her bill, SB 179, as offering a gender-neutral option on state documents for those who are transgender, intersex and others who do not identify as male or female.

The new non-binary designation will be available for California driver’s licenses starting in 2019.

The law also will make it easier for people to change their gender identity on official documents by doing away with a requirement in current law that individuals undergo clinical treatment before making a change to their birth certificates.

If you’ve been following the war against DNA recently, you’ve noticed that both Oregon and Washington, D.C. now offer residents the option of a gender-neutral driver’s license. This new California law is the first of its kind to allow neither male nor female (in others words, “non-binary”) on birth certificates. BIRTH. CERTIFICATES. 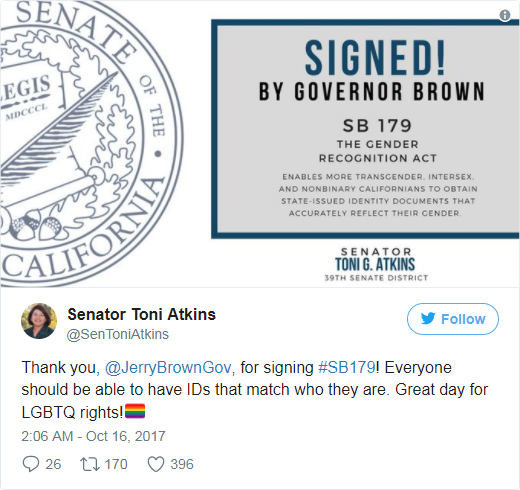 It no longer matters that the black and white truth on the ultrasound screen clearly indicates male or female. It no longer matters that the OB/GYN said “it’s a girl!” or “it’s a boy!” upon delivering a child. Californians will be allowed to change their birth certificates as a result of SB-179. I mean, why not go all the way back to the beginning and start the lie there, right?

Of course, those who push and promote such legislation love to claim that it is necessary because of how it will help those who identify as intersex. If you’re unaware, the term “intersex” refers to individuals with a mixture of sex characteristics, including chromosomes and genitalia. This is nowhere near a common occurrence, though, as it’s estimated that 1.7% of the population is intersex. Even those few who could rightly claim the designation of intersex more often than not quietly choose one or the other with the aid of hormones and surgery. This is not the same as transgenderism, a mental delusion where emotions – not physicality – rule.

Those who contend that such a law is necessary are only preaching a feelings-based gospel. But in 2017, that kind of doctrine is all the rage. And what better place to find disciples than in California?

Unfortunately, this will not be the first law of its kind. The crusade to shatter biological building blocks is only in its infancy. I guarantee that we’ll see more legislation attacking the truth in favor of placating the LGBTQ community.

DNA is stubborn, but in California, it can now be legally erased.