Chief Rabbi speaks out against death penalty for mass-murdering Muslim terrorists; Claims Jews are terrorists too 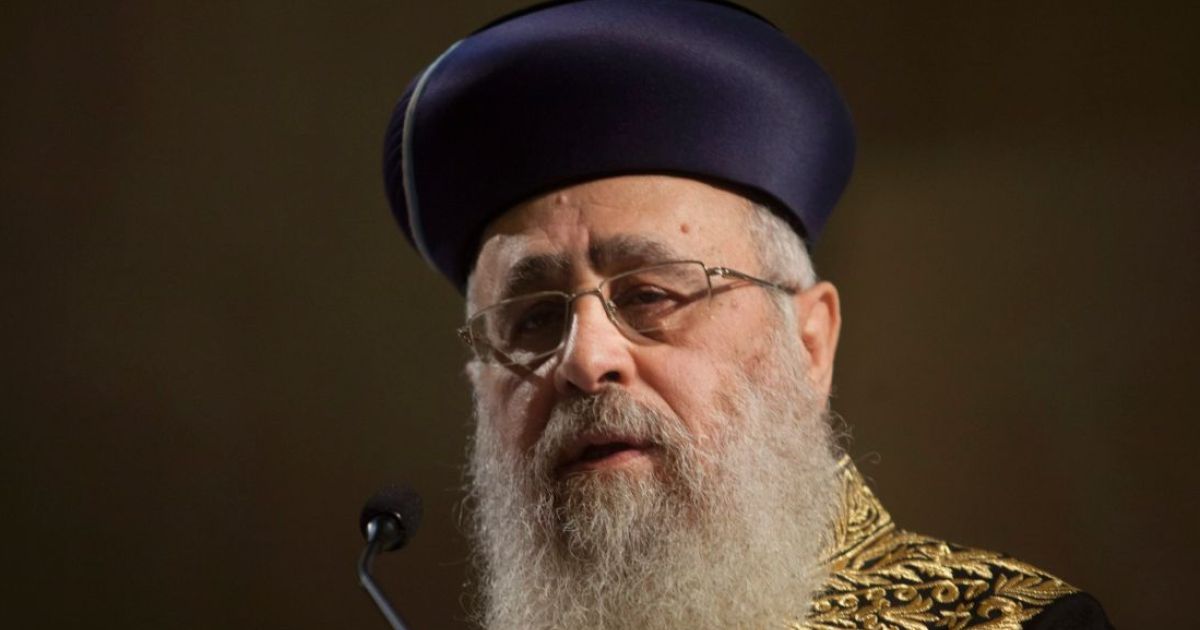 The Chief Sephardic Rabbi of Israel, Rabbi Yitzhak Yosef, on Saturday night spoke out against the death penalty for terrorists law being promoted by Defense Minister Avigdor Liberman (Yisrael Beytenu).

According to the Kikar Shabbat website, Rabbi Yosef warned in his weekly shiur (Torah lesson) that if the law is approved, it would endanger Jews, not just in Israel but around the world as well, as it would mean that Jews who carried out terrorist attacks would also be put to death, which would be against halakha (Jewish law).

“Top religious figures were once at a meeting with the president, and there was one person – the president of the Sharia court – who started to speak against the Jews because of the one who burned the family in Duma,” recalled the Rabbi. “Later on, I got up to speak and told him, ‘You brought one example (of a Jewish terrorist –ed.). There are examples of Arabs committing attacks every day, thousands and tens of thousands, how can you compare? There was one [Jew who carried out an attack] and everyone denounced him, the chief rabbis issued a condemnation, did you issue a condemnation of the [Jewish families] who were slaughtered on a Friday night?’”

“If there was a law stipulating capital punishment, then what would have to be the sentence of that Jew who burned [Arabs in Duma]? He would have to be sentenced to death, he deserves death, but death by heaven. Let him catch a disease or be involved in a car accident, but can you kill him? Are we the Sanhedrin?” said the Rabbi, who also expressed concern over what the reactions to the death penalty in Israel would be around the world.

“From the verdict to the execution, what kind of noise will there be in the world? The Jews in France, Spain, everywhere – will be in danger,” he warned.

Rabbi Yosef also mentioned the opposition of the defense establishment to the proposed legislation. “All the security people say that there is not much point in this. That’s why the great sages, the real ones, were always against this law, it’s not about left or right, it’s connected to the judgment of a great rabbi.”

The law imposing death penalty on terrorists was approved in a preliminary reading last Wednesday by a majority of 52 to 49.

If it passes its second and third readings, the law will allow army courts to sentence terrorists found guilty of murder to death with only a simple majority. Under current law, the death penalty may only be imposed by unanimous decision.

However, so far there appears to be opposition to the law, even from members of the coalition, and it is unclear whether it will be promoted further.