College Takes White-Hating, Self-Loathing To An All New DISGUSTING Extreme 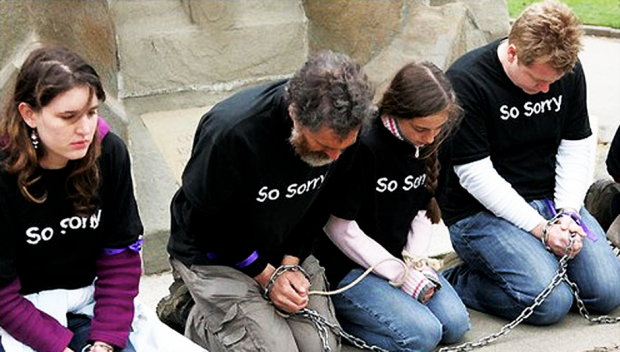 It’s not their fault they were born with the “silver spoon of whiteness” in their mouths. Still, having recognized that being white is unacceptable, inaction simply cannot be tolerated. It’s one thing to have been born white; it’s quite another to accept it as normal. As mankind is now beginning to understand, a lack of sufficient pigmentation is irrefutable evidence of social oppression, self-obsession, and a reckless propensity to abuse others. At least, that’s what the left would have you believe.

Put in the simplest of terms, being white is evil, and it must be recognized as such. While it may not be possible to change one’s stripes, there are ways white folks can help through appropriate self-loathing and social amends. The decision to deny the validity of your own existence is an important first step and Portland Community College (PCC) is here to help.

They’re observing “Whiteness History Month,” what they describe as an “educational project” exploring how the “construct of whiteness” creates racial inequality. Their website describes “a multidisciplinary, district-wide, educational project examining race and racism through an exploration of the construction of whiteness, its origins, and heritage.” Blame the Vikings, they started it. Maybe it was those pasty, bad-toothed Brits.

Just when we thought we had it pinned down to the appropriate group to target with irrational skin-based hatred, PCC decided to go philosophical on us. Now, whiteness is not just about…”whiteness.” They say it goes deeper than skin tone, somehow. It’s a pretty safe bet that all of us are a similar shade of red under the skin, so they might want to back track just a bit.

They continue headlong regardless, declaring that whiteness “does not simply refer to skin color[,] but [to] an ideology based on beliefs, values, behaviors, habits, and attitudes, which result in the unequal distribution of power and privilege based on skin color.”

It’s that white power thing we’ve heard so much about at those “White Lives Matter” rallies and the chants of those marching “New White Panthers.” PCC recognizes that White folks have their own color-based values, and they just behave differently. Simple things like pronouncing words phonetically, having both parents involved in raising their children, shunning inner city drug and gang cultures, and taking responsibility for one’s actions are prime examples of how being white offers unfair advantages.

PCC makes it clear that they are not celebrating whiteness in the manner of other heritage months, but rather it is a time of cleansing, “an effort to change our campus climate” by “[challenging] the master narrative of race and racism through an exploration of the social construction of whiteness.” Only brain-dead liberals could mix climate change and racism into a communism-advancing hatred of the most successful segment of Americans.

Whose bright idea was this anyway, you might wonder. Blame the bigots at the self-serving Cascade Campus Diversity Council for this Obama-style assault on the content of the character of their “fellow Americans.” They’re calling for the creation of a “nationally renowned culture for diversity, equity, and inclusion,” in other words, policies of unfair exclusion of whites. Aren’t those already federally mandated?

Campus Reform detailed how the program’s “Context” section urges students at the PC-obsessed PCC to “explore the meaning and history of whiteness, specifically how it ‘[emerged] from a legacy of imperialism, conquest, colonialism, and the American enterprise.’

They are also guided in the exploration of the “’legal, cultural, economic, social, environmental, educational, and/or intrapersonal consequences of whiteness,’ especially in terms of the winners and losers that result from it.”

Unfortunately the cure remains elusive, as exposure to the training having only minimal impact. The white students still remain hopelessly white.