Cruz: It’s Nuts, Wrong, Dangerous and Immoral to Draft Women and Put Them In Close Combat 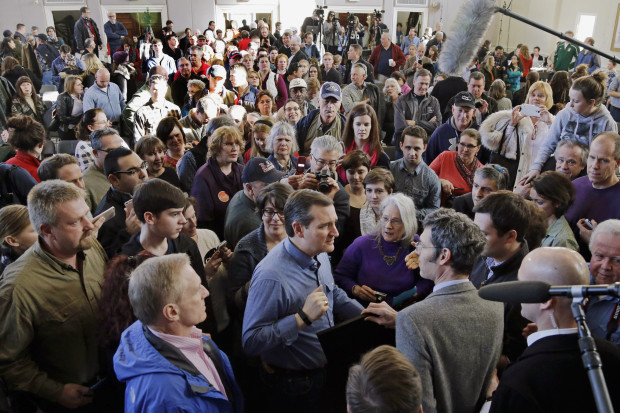 Sen. Ted Cruz on Sunday talked about his opposition to drafting women into combat in the U.S. military in remarks to an audience at a town hall in Peterborough, New Hampshire. According to the Boston Globe, Cruz mentioned Saturday’s debate and without naming them referred to his competitors, Sen. Marco Rubio and Governors Jeb Bush and Chris Christie all of whom said during the debate that they would support requiring women to register for the draft:

“My reaction was, ‘Are you guys nuts?’” Cruz told the crowd, before launching a tirade against political correctness.

Cruz received applause from those inside the crowded town hall sharing an enthusiasm for his brand of conservatism. Sen. Cruz’s full remarks on the draft issue are as follows:

It was striking that three different people on that [debate] stage came out in support of drafting women into combat in the military. And I have to admit as I was sitting there listening to that conversation, my reaction was “Are you guys nuts?” Listen, we have had enough with political correctness, especially in the military. Political correctness is dangerous. And the idea that we would draft our daughters to forcibly bring them into the military and put them in close combat, I think is wrong. It is immoral and if I’m president, we ain’t doing it.

I’m the father of two little girls, I love those girls with all of my heart, they are capable of doing anything in their heart’s desire, but the idea that their government would forcibly put them in a foxhole with a 220 pound psychopath trying to kill them doesn’t make any sense at all. It is yet one more sign of this politically correct world, where we forget common sense. We got to get back to common sense, we’ve got to get back to a president that says, “No, that doesn’t make any sense.”

Last Tuesday, the chiefs of the Army and the Marine Corps told a Senate committee that they believe it is time for women to register for future military drafts, following the Pentagon’s recent decision to open all jobs in combat units to female service members. During the ABC GOP debate, moderator Martha Raddatz asked Rubio and then Jeb whether young women  should be required to sign up for Selective Service. Rubio and Jeb agreed with the idea, and then for some reason Christie volunteered his support as well:

RUBIO:  I have no problem whatsoever with people of either gender serving in combat so long as the minimum requirements necessary to do the job are not compromised. But, I support that, and obviously now that is the case I do believe that Selective Service should be opened up for both men and women in case a Draft is ever instituted.

RADDATZ: Thank you, Senator Rubio. Governor Bush, do you believe that young women…

RADDATZ: Do you believe young women should sign up for Selective Service, be required to sign up…

BUSH: … I do, and I do think that we should not impose any kind of political agenda on the military.

CHRISTIE: Part of that also needs to be part of a greater effort in this country, and so there’s no reason why one — young women should be discriminated against from registering for the selective service.

You can read the entire discussion in this transcript.

As has been pointed out by Mike Fredenburg, putting women into close combat roles isn’t fair to the men who will be relying on them, and isn’t fair to the women who will find themselves continuously at a deadly disadvantage. While women are equal to or better than men at many tasks, they simply aren’t when it comes to combat.

A recent study, by Britain’s Tri-Service Review found that mixed-gender combat units have “lower survivability,” a “reduced lethality rate” and reduced deployability. This study, along with countless others done over the last 40 years, demonstrate that combat capabilities are so heavily weighted toward men that the gap cannot be closed. As Marine Corps captain Lauren Serrano put it in a September 2014 article in the Marine Gazette: “Acknowledging that women are different (not just physically) than men is a hard truth that plays an enormous role in this discussion.”