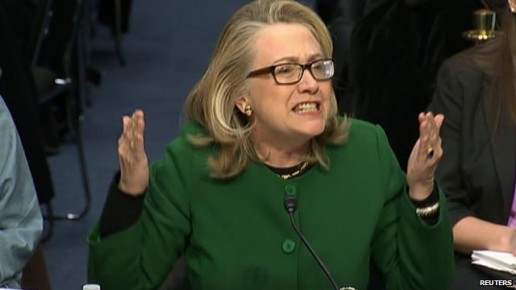 NEW YORK – More than 100 pages of previously classified Department of Defense and Department of State documents implicate the Obama administration in a cover-up to obscure the role Hillary Clinton and the State Department played in the rise of ISIS.

The documents were obtained in a Freedom of Information Act lawsuit filed by the Washington watchdog Judicial Watch.

They confirm WND reporting over the past three years of evidence that U.S. Ambassador Christopher Stevens was involved in shipping weapons from Benghazi to support the al-Qaida-affiliated militias fighting the Bashar al-Assad regime in Syria, effectively arming the Sunni jihadists who morphed into ISIS.

The documents further confirm WND reporting that the goal of the terrorists behind the Benghazi attack that killed Stevens was to force the release of Omar Abdul Rahman, the “blind sheik” in U.S. prison serving a life sentence for his involvement in the 1993 bombing of the World Trade Center, and to avenge death of a prominent Libyan al-Qaida leader killed by a U.S. drone strike in Pakistan.

“These documents are jaw-dropping,” said Judicial Watch President Tom Fitton. “No wonder we had to file more FOIA lawsuits and wait over two years for them.”

Fitton referenced in particular a Defense Department document from the Defense Intelligence Agency, DIA, dated Sept. 12, 2012. It documents that the attack on the Benghazi compound had been carefully planned by the al-Qaida and Muslim Brotherhood-linked Brigades of the Captive Omar Abdul Rahman, BOCAR, which aimed “to kill as many Americans as possible.”

The document, dated the day after the Benghazi attack, was sent to then-Secretary of State Hillary Clinton, then-Defense Secretary Leon Panetta, the Joint Chiefs of Staff and the Obama White House National Security Council.

“If the American people had known the truth – that Barack Obama, Hillary Clinton and other top administration officials knew that the Benghazi attack was an al-Qaida terrorist attack from the get-go – and yet lied and covered this fact up – Mitt Romney might very well be president,” Fitton observed.

“These documents also point to connection between the collapse in Libya and the ISIS war – and confirm that the U.S. knew remarkable details about the transfer of arms from Benghazi to Syrian jihadists,” Fitton stated.

He said the documents “show that the Benghazi cover-up has continued for years and is only unraveling through our independent lawsuits.”

Plan to release the blind sheik

The heavily redacted Defense Department “information report” provides additional evidence for a WND article Jan. 27 reporting that James “Ace” Lyons – a former four-star admiral who served as the commander in chief of the U.S. Pacific Fleet and a founding member of the Citizens’ Commission on Benghazi – proposed that the attack was an Obama administration-orchestrated kidnapping attempt that went “terribly wrong.”

Lyons speculated that the Obama administration wanted to give the al-Qaida-affiliated rebels operating in conjunction with the Libyan Muslim Brotherhood an opportunity to kidnap Stevens and exchange him for the blind Sheik. The purpose of the plan, Lyons says, may have been to furnish the Obama administration with a pretext to justify to the American public the release of the blind sheik to then-Egyptian President Mohamed Morsi, complying with a request Morsi made in his 2012 acceptance speech on becoming president of Egypt.

The newly released DOD and State Department documents also differ from the account of the Benghazi attack Michael Morell, the recently retired CIA deputy director, gives in his current book, “The Great War of Our Time.” On Page 206, he argues that viewing a CIA video of the Benghazi attack made in “real time” caused him to conclude that “with little or no advance planning, [Muslim terrorists] in Benghazi made some phone calls, gathered a group of like-minded individuals to go to the TMF.”

In Morell’s narrative, the 9/11 Benghazi attack “was not well organized” but “seemed to be more of a mob that had come to the TMF with the intent of breaching the compound and seeing what damage they could do.”

“Some of the attackers were armed with small arms; many were not armed at all. No heavy weapons were seen on the videotape,” Morell continued. “Many of the attackers, after entering through the front gate, ran past buildings to the other end of the compound, behaving as if they were thrilled just to have overrun the compound. They did not appear to be looking for Americans to harm. They appeared intent on looting and conducting vandalism.”

Morell stressed that the Obama administration, despite his objections to the contrary, has refused to make available for public viewing the yet classified CIA “real time” video of the Benghazi attack.

Judicial Watch also noted the DOD documents released this week contain the first official documentation that the Obama administration knew that weapons were being shipped from the Port of Benghazi to rebel troops in Syria.

Weapons from the former Libya military stockpiles were shipped from the port of Benghazi, Libya to the Port of Banias and the Port of Borj Islam, Syria. The weapons shipped during late-August 2012 were Sniper rifles, RPGs, and 125 mm and 155mm howitzers missiles.

During the immediate aftermath of, and following the uncertainty caused by, the downfall of the (Qaddafi) regime in October 2011 and up until early September of 2012, weapons from the former Libya military stockpiles located in Benghazi, Libya were shipped from the port of Benghazi, Libya to the ports of Banias and the Port of Borj Islam, Syria. The Syrian ports were chosen due to the small amount of cargo traffic transiting these two ports. The ships used to transport the weapons were medium-sized and able to hold 10 or less shipping containers of cargo.

The heavily redacted document does not disclose who was shipping the weapons.

Another Defense Intelligence Agency report, written in August 2012, the same time period the U.S. was monitoring weapons flows from Libya to Syria, said that the opposition in Syria was driven by al-Qaida and other Muslim groups: “the Salafist, the Muslim Brotherhood, and AQI are the major forces driving the insurgency in Syria.”

Judicial Watch noted the sectarian direction of the war in Syria was predicted to have dire consequences for Iraq, which included the “grave danger” of the rise of ISIS.

The DIA document noted the following:

This creates the ideal atmosphere for AQI [al Qaeda Iraq] to return to its old pockets in Mosul and Ramadi, and will provide a renewed momentum under the presumption of unifying the jihad among Sunni Iraq and Syria, and the rest of the Sunnis in the Arab world against what it considers one enemy, the dissenters. ISI could also declare an Islamic state through its union with other terrorist organizations in Iraq and Syria, which will create grave danger in regards to unifying Iraq and the protection of its territory.

Judicial Watch commented that some of the “dire consequences” are blacked out but the DIA presciently warned one such consequence would be the “renewing facilitation of terrorist elements from all over the Arab world entering into Iraqi Arena.”

On Feb. 26, Judicial Watch has reported on State Department documents obtained by the Washington-based watchdog organization in a separate FOIA lawsuit that revealed aides for then-Secretary of State Hillary Clinton, including her then-chief of staff Cheryl Mills, knew from the outset that the Benghazi mission compound was under attack by armed assailants tied to a terrorist group.