Does Accepting Homosexuality Curb the Spread of HIV? A 35-Year Experiment

In 1981, a flush of gay infections announced the American AIDS epidemic.  A debate ensued: should homosexuality be suppressed by closing gay bars and baths, outlawing homosexual activity, and rigorously enforcing laws against public sex, etc., thus dampening opportunities for homosexuals to spread the disease?  Or should it be mainstreamed by “reducing discrimination” – passing LGBT legal protections, admitting gay activists into positions of power, etc. – and hence provide incentives for homosexuals to voluntarily help society and themselves by “being careful”?

In 1989, the National Research Council agreed with gay leaders that discrimination was the major “social barrier to prevention” and thus “causing” the spread of HIV among gays.  It recommended mainstreaming homosexuality to curb HIV’s spread (1).  Subsequently, a bevy of LGBT rights laws and court rulings has transformed the U.S. into a homosexual-friendly society.  The same government that in 1950 called gays “perverts,” by 2016, said they were a valued “sexual minority.”

In China, homosexuality was vigorously suppressed when the country instituted its one-child policy in 1978-80.  Given China’s culture and size, the one-child limit set the stage for a flood of men without women (perhaps 24 to 33 million in 2016 [2]).  China decriminalized homosexual acts in 1997 and delisted homosexuality as a “mental illness” in 2001, around the time some of its “surplus males” took up homosexuality.  Confronted with growing HIV IHH infections among gays, China partially suppressed homosexuality, forbidding its promotion and refusing to grant LGBT rights.

All countries impacted by HIV have worked to suppress the spread of AIDS.  Their various containment strategies effectively constitute a natural 35-year experiment involving dozens of governments, billions of people, and hundreds of prevention schemes.  Unlike typical sex surveys that tell us what people said they did, but not necessarily what they did in practice, we know “what actually happened” over the past 35 years.  Three key results from this natural experiment are now evident:

Dr. Zunyou, aware of outcomes across the world, concluded that no matter the language, culture, or prevention scheme, refusal by gay males to protect themselves and others from infection is a sort of “constant.”  The most recent HIV infection report from the U.S., involving homosexual males, IV drug abusers, and heterosexuals, underscores Dr. Zunyou’s assessment (see Table 1).

Most of those susceptible to, or who contracted, HIV would not be considered “outstanding citizens” in either China or the U.S.  Apparently, though, among prostitutes, heterosexuals, and IV drug abusers, there was enough concern for the safety of themselves and their associates to drive the recent overall decline in numbers of new HIV infections (see Figure 1).  The essentially steady infection rate among gay males (Figure 1) led to a growing proportion of infections attributable to homosexual contact (Figure 2). 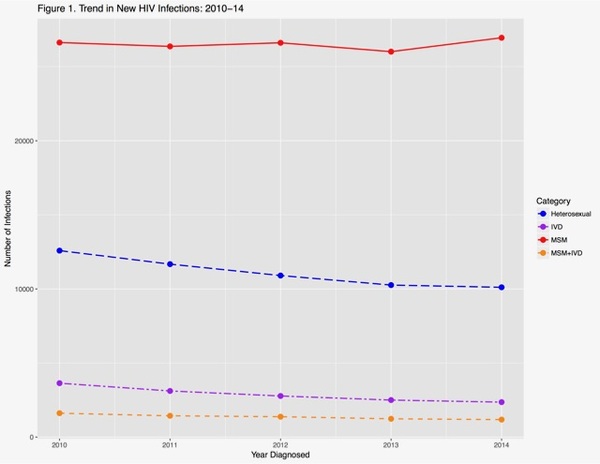 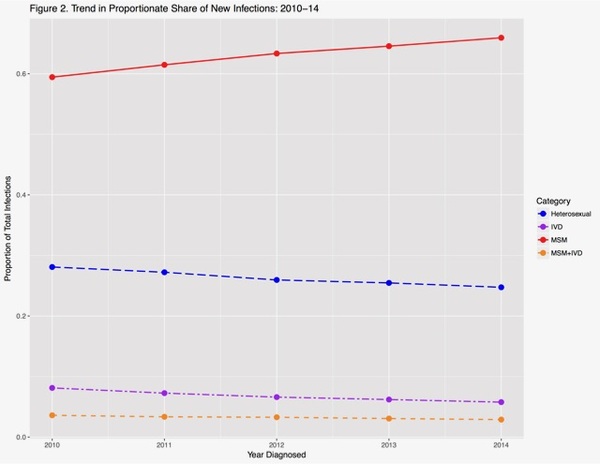 Homosexuals evidence solidarity in gay pride parades or in demanding “gay rights.”  They appear united and mutually concerned in condemning those in politics, academia, or the arts who refuse to celebrate homosexuality – charging non-celebrants with a lack of “compassion.”  But prostitutes don’t claim to “love” their customers, nor IV drug abusers to love their fellow shooters.  So by failing to practice the same level of self- and other-protection employed by prostitutes or IV drug abusers, the new HIV infection rates among gay males indicate a lack of compassion in addition to a lack of precaution.  Historically, Plato condemned homosexual love as without any emotional or altruistic aspect.  As such, he argued, it does not benefit society (6).  Christianity agreed, considering homosexuality a pathological contagion (pointing to Sodom) that could destroy society and must be suppressed.  And, until 1973, psychiatry held that homosexuality indicates mental disturbance.

That the proportion of new HIV infections among gays in the U.S. continues to grow, while the proportion among heterosexuals, prostitutes, and IV drug abusers continues to decline, may add weight to Plato’s view that homosexual relations lack altruism.  If so, modern attempts to equate homosexual “love” with what everyone else means by “love” – including its altruistic core – are misguided at best.

Studies in gay-friendly societies indicate that homosexuals have more psychiatric, personal, and social problems than do non-homosexuals.  This differential was documented before LGBT rights and remains the case after LGBT rights.  Again, this suggests a stubborn difference associated with homosexuality, whereby its participants more frequently consider their lives less satisfying and more frequently are depressed, use drugs, and are suicidal.

Lest one conclude from this natural experiment that homosexuals cannot change their behavior or susceptibility to HIV because they are “born that way,” China’s experience of a growing number of homosexual males, probably due in part to its one-child policy, adds powerful evidence that homosexuality is learned and not inborn, what with the coincident rises in homosexuality and the unavailability of female partners.  Indeed, the natural experiment created by China’s one-child policy demonstrates that social policies can influence how many males engage in sexual activity with other males (though saying nothing, of course, about the degree to which homosexuality can be unlearned).

HIV trends in China suggest that “hard suppression” of homosexuality (with homosexuals constituting 1% of HIV sufferers), compared to “soft suppression” (which has homosexuals at 27% and climbing), worked better at curbing the spread of HIV among gays.  Similar HIV trends in the U.S. continue, even though the U.S. has become exceedingly gay-friendly.  Again, we are reminded of Dr. Zunyou’s warning: no country has been able to substantially modify gay sexual practices, at least in the era of LGBT legal protections and gay-friendly public health.

Not only has the proportion of gay-related new HIV infections risen, but so has the degree of social disruption.  Consistent with efforts in American public education to promote homosexual acceptance, a 2015 CDC nationwide survey of sexual identity among U.S. high school students found that self-identified heterosexuals saw a relative decline of 6% (from 92% in 2001-9 to 86% in 2015), those sexually uncertain or confused increased 53% (from 2.6% to 4%), and those claiming to be gay or bisexual increased 84% (from 5.1% to 9.4%) (7).

Similarly, the U.S. is on the verge of losing the luxury of same-sex privacy in public restrooms because “transsexuals” want in.

These LGBT-friendly changes have failed to curb the spread of HIV by gays.  Indeed, in both countries, even with massive use of retroviral drugs and now Truvada (which theoretically renders the user almost non-infectious), gay-related increases in their proportion of HIV infections are correlated with increased social acceptance of homosexuality.