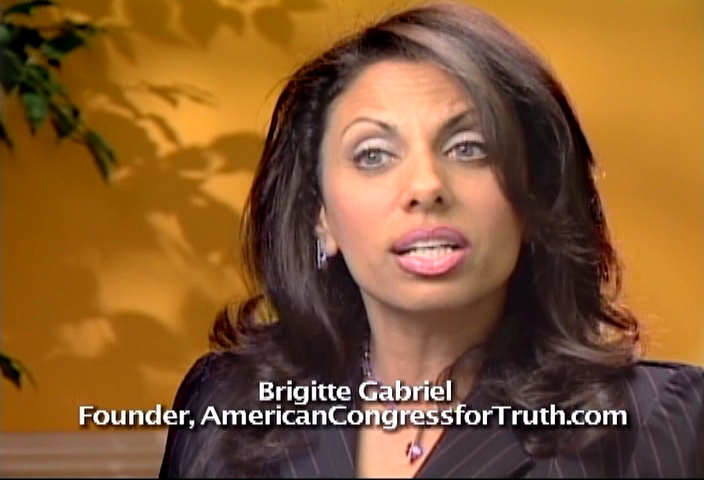 Brigitte Gabriel, an Arab Christian, who as a young girl was a victim of radical Islam during the Lebanese Civil War.

In her book Because They Hate, Gabriel recounts that in 1975 when she was 10-years-old living in southern Lebanon, Muslims from throughout the Middle East poured into her country and declared jihad against the Lebanese Christians. For over seven years Brigitte and her family lived in an underground bomb shelter. Her experience qualifies her well to speak about the current invasion of “migrants” into Europe from Northern Africa and the Middle East.

The first thing grass roots organizations in America have to do is to stop the “refugees” from these foreign countries from coming to Europe and America, the author and expert on Islamic terrorism insists.

Gabriel, the founder and President of Act for America, who  lectures internationally about national security and current affairs, told Bannon and Marlow that her group has 930 chapters working to protect America. “We do not want any ‘Syrian’ refugees coming into the country” she asserted.

Other issues that bother the Lebanon native about “refugees” are that terrorists embed themselves in the migrant population. Gabriel points out that last week an ISIS recruiter turned up in a vetting of a pool of migrants in Germany.

Moreover, she explained that the other countries in the Middle East are not taking them in. “What better place for these so-called Middle Eastern refugees to go than the ones in their own region, where they can write and speak Arabic.”

Gabriel suggest that “they should go to Saudi Arabia, a very wealthy Middle Eastern country, or Dubai. I mean look at Dubai. They have money growing on trees in Dubai. Kuwait, Bahrain, Abu Dhabi.”

Bannon asked the Middle East expert,if it is an overstatement to call what is happening in Europe an invasion. “It is not an overstatement,” she replied. “Europe will no longer be Europe by 2050. Europe has already become Eurabia. Europe is Eurabia right now.”

Gabriel spoke of the inception of this transformation that should send chills down the spine of every American. “What happened in Europe, ever since they started bringing the Muslims workers to rebuild Europe in the 1970s after the war, was to bring them in under a guest-worker program. Does that word sound familiar? We’ll let them come in and work for two years and they will go back and then we will bring new workers. I will pay them less money and we don’t have to do the dirty jobs.”

The Europeans began to enjoy the cheap labor so much that they created a “family reunification program.” Now the Muslims could stay and work with their families nearby and the Europeans felt better about themselves. The problem, Gabriel pointed out, is that the Muslim men tend to have multiple marriages and reproduce at a rate that has caused a huge Muslim population crisis in many of the countries. Many of the men now don’t work and live on welfare, she stated.

The entire phenomenon has morphed Europe, making it unrecognizable over the last forty years, claims Gabriel. The mistake Germany made by inviting all the “refugees” over the last month is that they “reacted on emotions and they were not thinking,” said the leading Middle Eastern anti-refugee activist. “They have no intention of assimilating into Western culture,” Gabriel asserted.