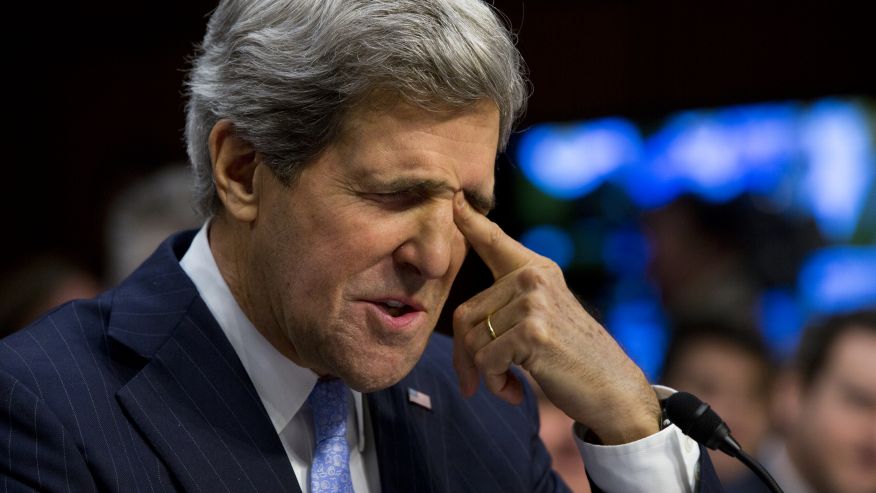 The big and misguided takeaway, as reported by Jay Caruso, came during the third sentence, “the two state solution is the only way to achieve a just and lasting peace between Israelis and Palestinians. It is the only way to ensure Israel’s future as a Jewish and democratic state, living in peace and security with its neighbors.”

As Michael Rubin put it, the problem with Kerry’s woefully inadequate attempt to justify Obama’s refusal to veto the United Nations Security Council resolution 2234 slandering Israeli “settlements” as the foremost obstacle to peace are not only ego and pique of Kerry and Obama, but also the false conventional wisdom upon which they and their aides operate.

Obama and Kerry for the first time have denied Israel’s rights to the Western Wall, Judaism’s holiest site. Kerry appears unaware that Jordan — which occupied the Old City of Jerusalem but whose possession was not internationally recognized — had blown up synagogues and religiously cleansed the city. What Obama and Kerry do is legitimize this.

As wonderfully summarized by Bruce Thorton, Kerry, like Obama, fails to recognize that there is no “Palestinian” people or “homeland”:

There are Arabs whose historical homeland is the Arabian Peninsula. Any Arab living elsewhere is the descendant of invaders, colonizers, occupiers, and immigrants. There are no “occupied territories” or “borders,” but rather contested territories which are bounded by the 1967 armistice line, and the disposition of which will be decided through a negotiated settlement. The “West Bank” is a euphemism for the historical Jewish districts of Judea and Samaria. Jerusalem is not an Arab city, but for three thousand years has been the capital of the Jewish people, who have inhabited it continuously. The “settlements” are not colonial outposts created at the expense of their rightful owners, but towns and cities in the ancient Jewish homeland, most of them on land purchased from Arab landowners happy to make a profit on such barren tracts.

Nor is Israel an “illegitimate” country. Its existence is the result of international law as created by treaties, conferences, the League of Nations, and the U.N. resolution which established an Arab and a Jewish state, the latter comprising one-quarter of the territory mandated for Israel in the postwar settlement. Israel is as legitimate, and in fact even more legitimate, than the other states created in the region like Jordan, Lebanon, Syria, and Iraq, or the states like Hungary, Austria, the Kingdom of Serbs and Croats, and Czechoslovakia created after the dismemberment of the Austro-Hungarian Empire.

Moreover, Israel has had to fight off three armed attacks against it on the part of Arab countries that disregarded the U.N. resolution, Article 39 of the U.N. Charter, and numerous international treaties. Instead they tried to win by force land given to the despised dhimmi Jews they had oppressed and dominated for over a thousand years. They tried and lost, and in 1967 suffered the eternal wages of failed aggressors––loss of territory. Only in this case, the territory the Arabs lost was theirs only by dint of conquest, not legitimacy, and its loss was no different from the Muslim loss of Spain to the Reconquista, or from Greece’s liberation from the Ottomans in 1832. But the land won by the Israelis in the defensive war had been Jewish since the 13th century B.C.

In fact, Israel has increasingly consolidated control over much of the West Bank for its own purposes – effectively reversing the transition to greater Palestinian civil authority called for by the Oslo accords…. The number of settlers in the roughly 130 Israeli settlements east of the 1967 lines has steadily grown. The settler population in the West Bank alone – not including East Jerusalem – has increased by nearly 270,000 since Oslo, including 100,000 just since 2009 when President Obama’s term began.

We’ve been here before. In 2011 Obama mounted a less vicious attack on Israeli settlements than this current campaign. Then, as reported by Jeff Emanuel, Obama unilaterally declared that Israel must Israel must withdraw to its 1949 borders. Israeli Prime Minister Benjamin Netanyahu responded to Obama’s declaration by reminding Obama that back in 2004 President George W. Bush promised Israel that there would be no return to the indefensible 1949 borders:

In light of new realities on the ground, including already existing major Israeli populations centers, it is unrealistic to expect that the outcome of final status negotiations will be a full and complete return to the armistice lines of 1949, and all previous efforts to negotiate a two-state solution have reached the same conclusion . It is realistic to expect that any final status agreement will only be achieved on the basis of mutually agreed changes that reflect these realities.

Nevertheless, Israel tried to cooperate with Obama and froze settlements for nine months. Rubin, in his take down of Kerry’s misguided speech talks about this in terms of the PalestinianAuthority’s intransigence, diplomacy and law:

Who is holding up peace? After long and careful negotiations between Israel and the Palestinian Authority brokered by the United States and the broader international community, Israeli leaders offered their Palestinian counterparts peace deals in 2000 and 2008. Both the late Palestinian chairman Yasser Arafat and his successor Mahmoud Abbas rejected the offers and walked away, without offering a counter proposal. When Israeli Prime Minister Benjamin Netanyahu froze settlement construction upon Obama’s request, Abbas again refused for nine months to even talk to the Israelis.

The Palestinian Authority was created as a result of the Oslo Accords. By walking away from that agreement, both in terms rejecting terrorism and acting unilaterally, the PalestinianAuthority have done away with the foundational document which legalizes their existence. By acquiescing to unilateral Palestinian actions and revising the basis of Palestinian-Israeli peace, Kerry has shown that U.S. diplomacy and commitments can never be trusted.

The West Bank and Jerusalem are technically disputed territories, rather than occupied Palestinian land. That is why the Oslo Accords called for bilateral negotiations. While Kerry talks about the “1967 lines,” he means the 1949 Armistice lines. (When complaining about Israeli resorts on the Dead Sea, Kerry appears not to realize the 1949 Armistice lines make Israel littoral to the Dead Sea). This reflects ignorance among diplomats rising to the very top. Kerry is also confused about settlements. If it is illegal to build on disputed land, then all building, be it by Israelis or Palestinians, should be treated similarly.

The main problem with the Obama policy Kerry attempted to explain, is that Kerry and Obama seek to impose their idea of a solution to the problem that part of the Arab world has with Israel, instead of trying to facilitate an environment where the parties can work it out for themselves. We can’t just impose a settlement upon the Israelis and offer them guarantees that we will defend them. How can any Middle-eastern state trust American security guarantees or red lines after Obama and Kerry’s reversal on the Syria chemical weapons red line?

If you have the stomach for it, you can read a transcript of Kerry’s entire awful speech here.