Families of Victims of Violence by Illegal Immigrants Storm Washington

At a Tuesday Senate hearing dedicated to the families who lost loved ones thanks to illegal aliens, Laura Wilkerson gave testimony on her youngest son Joshua’s horrific death while some in the silent audience wept. 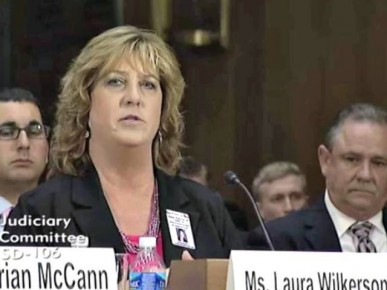 Wilkerson called on Congress to place American lives and interests over foreigners, especially those illegally living in the country.

During the hearing, titled “Oversight of the Administration’s Misdirected Immigration Enforcement Policies: Examining the Impact on Public Safety and Honoring the Victims,” Wilkerson broke from her written testimony to deliver a dire warning.

“This was our family’s 9/11 terrorist attack by a foreign invader,” she said at the most pivotal point in her testimony. “It is going to take another life lost by a Senator, a Congressman, the President, even another of today’s heroes, someone from Hollywood before someone in a position moves on this.”

“My son’s name was Joshua Wilkerson,” she began. “On November 16, 2010, he was beaten, strangled, tortured until he died. He was tied up, thrown in a field, and set on fire. His killer, Hermilo Moralez, was brought here illegally by his illegal parents when he was ten years old, so he fit the ‘DREAM’ kid description. He was sentenced to life in prison, which means it will be 30 years before he’s up for parole. He’ll be a 49-year-old man, who I don’t expect to be deported. And I just hope he doesn’t come to live in your city.”

Ms. Wilkerson’s son was murder by an illegal immigrant who, because he came to the country as a minor, would have qualified for Obama’s 2012 executive amnesty granted to illegal immigrant minors — or so-called DREAMers, whom Obama insists “belong here.”

Border patrol and immigration officials have explained that executive amnesty for illegal minors was, in large part, responsible for the surge of children coming across the border last summer.

Unlike most Western countries in which all foreign nationals illegally residing in the country are subject to immigration laws, in the United States, the left has effectively carved out a sector of the illegal immigrant population — illegal minors — who are exempt from immigration law. In so doing, the left has created a perpetual cycle of chain of amnesty– as evidenced by Obama’s 2014 amnesty in which he decided to suspend immigration laws for the parents of DREAMers.

“We had to hear this kid on the stand muttering about, ‘In my country…’ ‘In my country…’ never to finish that sentence. We listened to him tell us repeatedly that his ‘killing skills took over,’ that Josh had kicked his dog, and his ‘killing skills took over.’ His parents somehow managed to provide lessons so he acquired a black belt in mixed martial arts. Joshua had never been in a fight in his life.”

Joshua was a “very quiet, old soul,” his mother said. “He didn’t speak a lot, but when he did, you listened to him. Like I said, he’d never been in a fight in his life.”

The silence in the hearing deepened as Wilkerson continued: “Instead of getting Joshua home that day from school, we got an autopsy report.”

Wilkerson read aloud portions of the gut-wrenching autopsy: “‘This body is received in a grey body bag. There’s a tag on his toe that bears the name, Joshua Wilkerson. This is a white male weighing a hundred pounds. He is tied up with braided rope — 13 loops around his neck in a slipknot. It goes behind his back through his back belt loop. It goes to his hands and his feet, behind his body. He has multiple fractures in his face and nasal cavity. His throat and his voicebox are crushed.’”

Wilkerson took a deep breath and continued, looking at the senators before her with a steady gaze. “He was kicked so hard in the stomach that it sent his spleen into his spine, and sliced it in two… The medical examiner said it was torture.”

She returned to the text of the autopsy: “‘This body has significant skin loss on his buttocks, his abdomen, his penis, his hands, and his face. He has one stick of gum and a tardy slip in his pocket.”

“This was our family’s 9/11 terrorist attack by a foreign invader, whether you want to recognize it or whether you do not,” Wilkerson said. “This government continues to fail or even recognize that we have an issue. Americans are dying daily at the hands of criminals that we don’t even know are here.”

“You’re officially notified today there’s a problem when this happens. You can’t deny it any longer. You cannot you cannot stand by and ignore our families — our American families. You’re elected by Americans, not any other country. You should be for Americans,” she emphasized. “If you want to sit quietly on the sidelines, you’ve thrown your hat into the ring already. Your silence speaks volumes. You’re either for Americans, or you’re not.

“I will not give up another one of my children so that a foreign person can have a nicer life. I’m not going to do it. You don’t understand the pain. It’s so deep in the soul — in the place you don’t even recognize you have. There aren’t words to describe the pain to someone who has not gone through it. I’m not giving up another kid,” she said.

Wilkerson then issued a blistering attack on sanctuary city policies that provide safe harbor and anonymity for dangerous, criminal aliens who are living illegally in the United States. She said:

Sanctuary city policies scream to the criminal element of illegals in this country: ‘Come to our town USA, we’ll protect you from our terrible policemen. We’ll protect you from these tough American laws, that you — because you had a hard life — are not able to go through the same motion that an American is.’ It is going to take another life lost by a Senator, a Congressman, the President, even another of today’s heroes, someone from Hollywood before someone in a position moves on this. I urge you: you are in a position to do something about this for Americans.

“I thank you, Mr. Trump for getting a message out about the nation in two minutes… that countless families like my own have been trying to say for five to six years. It feels good to be heard whether you love him, or whether you don’t, I felt heard.”

“Our family is shattered. It’s shattered– it’ll never be the same. We’ll manage, we’ll go on. We function. We put on that happy face. But my kids have changed — surviving kids have changed. Everything about us has changed. It’s by the grace of God that in our broken hearts we have a stream of memories of the loving relationship that we had with Joshua.”

Reminding mass immigration advocates at the hearing that American communities suffer unspeakable loss when an immigrant murders one of their own, Wilkerson said Joshua’s older brother returned from the battlefield fighting to defend our country, only to find no one was defending his younger brother.

“America lost that day. You lost a good citizen that was on the brink of becoming who knows what,” she said. “He mentioned going into the Air Force like his older brother, who was out defending this country — Americans — and we had to bring him home to bury his little brother, when he wasn’t being defended right here at home. It’s absurd to me.”

Illegal aliens aren’t living in the shadows, she added; they boldly break our laws and demand taxpayer freebies. She went on:

They’re not scared to come here. We’re inviting them. Sanctuary cities says, ‘Come on down.’ Sympathy has never trumped the law in this country. Ever. Everyone of them here threaten national security because we don’t know who they are. They make a decision to come here. They’re not scared, and they’re invited by sanctuary city policies. They aren’t scared to wait in line for a hand-out that every American citizen has paid into the system for our children if need be. They mistrust police because they come from countries that mistrust police. They’re not scared here.

I want you to know that our family is broken, forever. We are forever broken. I don’t want the sympathy. I want you to do  something about it. Every one of you sitting here is in a position to do something. Just throw your hat into the ring for Americans. Quit sitting silent because it’s going to help you get a vote. Throw your hat in the ring and take care of American families.

Wilkerson concluded her speech to a standing ovation from the audience. Sen. Chuck Grassley restored order with no small difficulty.

Despite her unimaginable pain, Wilkerson has bravely fought for years, telling her story over and over again to help stop amnesty and prevent other American families from seeing an autopsy report instead of greeting their children after school.