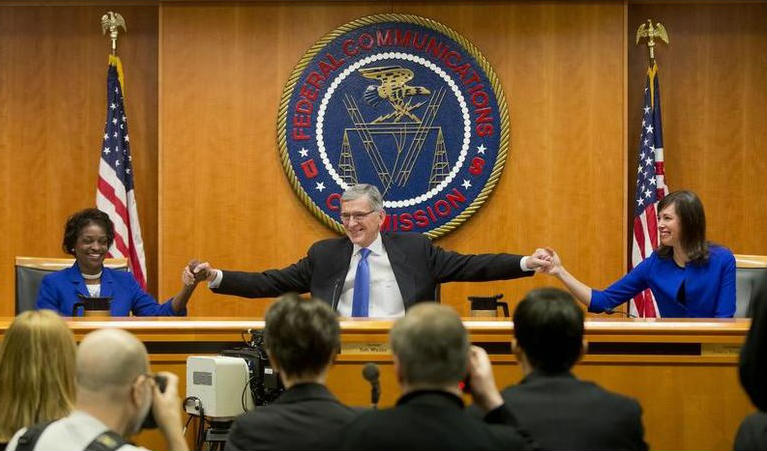 In what one Republican called a “monumental shift toward government control of the Internet,” the Federal Communications Commission on Thursday approved a proposal granting the federal government the authority to regulate Internet broadband providers under the same law as public utilities.

The five commissioners voted 3-2 along party lines in favor of the proposal known as net neutrality. The 332-page plan, which has not yet been publicly released, bans broadband providers from blocking, throttling or prioritizing certain Internet pages over others. The FCC has said the proposal will not seek to impose any new taxes or fees.

The three Democrats voiced their support of the measure while the two Republicans dissented. Democrats say they have the authority to impose the new regulations under under Title II of the Federal Communications Act of 1934.

In his remarks, Republican Commissioner Ajit Pai called the plan a “monumental shift toward government control of the Internet” and a “rapid departure” from market-oriented approaches.

“It is sad to to witness the FCC’s unprecedented attempt to replace that freedom with government control,” he said.

Wheeler announced the plan in a Feb. 4 op-ed, in which he called it the “strongest open Internet protections ever proposed, saying it “assures the rights of Internet users to go where they want, when they want, and the rights of innovators to introduce new products without asking anyone’s permission.”

Republicans made numerous efforts to stop the issue from coming to this. They have argued – and are still arguing – that the FCC shouldn’t get to decide how to regulate the Internet. That power, they say, is one that should be granted by Congress.

In fact, Sen. John Thune (R-S.D.) drafted legislation that would address many of the same issues as the ones the new FCC rules address. Reps. Greg Walden (R-Ore.) and Fred Upton (R-MI) joined with Thune in the House in trying to find a legislative solution ahead of the meeting, but were unable to push through a bill in time.

With Thursday’s vote now on the books, the issue might still be far from over. Some have said the fate of these new rules is destined for the Supreme Court.