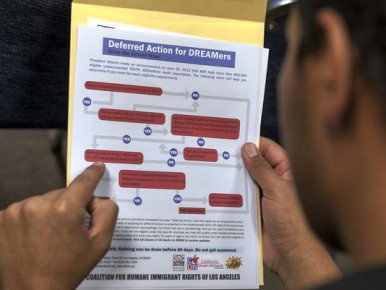 The administration’s program to grant amnesty to illegal immigrants under the Deferred Action for Childhood Arrival program has given the green light to 664,607 since 2012, including several linked to fraud, terrorism and gangs, according to the U.S Citizenship and Immigration Services agency.

What’s more, applications for permanent residence have surged from 3,000 to 7,500 a month, far above projections, according to agency answers provided to Senate Judiciary Immigration and the National Interest Subcommittee Republicans and obtained by Secrets.

USCIS said it is also producing 144,275 “employment authorization documents” each month, and has the capability to approve 400,000 work permits a month.

President Obama proposed DACA in 2012. It allows younger illegals who entered prior to June 2007 to get a renewable work permit and exemption from deportation. Since then, 243,872 renewals have been granted.

As of March, 664,607 of applications derided by critics as “amnesty” were approved. Of those granted amnesty, at least 49 had gang ties, six had a possible link to terrorism and 3,959 had indicators of fraud. Just 43,375 have been denied.

The answers to some 49 questions following a recent hearing also revealed that the administration employs 331 workers just to handle DACA applications, which the administration said was paid for by the series of documents filled out by illegals.