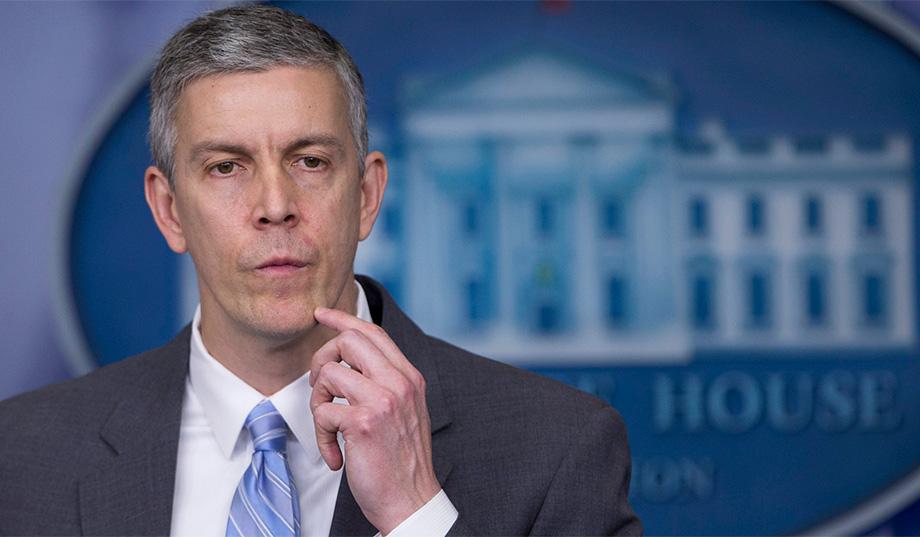 There was a time when Common Core supporters loudly insisted the program — adopted by no fewer than 46 states — was most assuredly not federal, that any allegation that this astounding national uniformity was the result of federal pressure was a nasty, vicious lie. The State Standards Initiative confidently declares as “myth” the assertions that “Common Core State Standards were adopted by states as part of the [federal] Race to the Top grant program” or that the “federal government will take over ownership” of Common Core. The Initiative’s position is clear: “The federal government will not govern the Common Core State Standards. The Common Core was and will remain a state-led effort.” (Emphasis in original.)

Yet when Common Core is threatened by a large-scale parental revolt, look who moves in to crush the dissenters’ dreams — Arne Duncan, the race-baiting (federal) Secretary of Education.

Last week an estimated 184,000 New York students (out of 1.1 million) opted out of this year’s Common Core–mandated English tests, a more than three-fold increase from last year’s 60,000 opt-outs. Large-scale opt-outs threaten the validity of the tests, decreasing the likelihood that they fairly measure overall student achievement. In some schools the opt-out rates have crippled the tests. One Manhattan school reported an 85 percent opt-out rate, and other schools — including one in Park Slope, Brooklyn — have reported opt-out rates exceeding 30 percent.

With the tests in crisis, Arne Duncan said this week that if the states can’t fix themselves, the federal government will “have an obligation to step in.” This means not just threatening to cut federal funding, but essentially forcing states to withhold their own funds from delinquent schools. Here’s New York Education Department spokesman Jonathan Burman:

“The feds are discussing the possibility of imposing penalties for failing to hit participation rate targets.” He added that the state is also expected to “consider imposing sanctions” on districts that fail to meet the 95 percent threshold, which could include withholding money “in the most egregious cases.”

But it wouldn’t be the Obama administration unless it injected race into the debate. In 2013, Duncan famously said that it was “fascinating” that Common Core opposition came from “white suburban moms who — all of a sudden — [realize] their child isn’t as brilliant as they thought they were, and their school isn’t quite as good as they thought they were.” He later apologized — blaming “clumsy phrasing” — but since that time he’s learned to make the same point, just more subtly.

In the past, English Language Learners, students in special education, and racial minorities were “swept under the rug,” Duncan said. “Folks in the civil rights community, folks in the disability community, they want their kids being assessed. They want to know if they are making progress or growth.”

“It is the responsibility of states to ensure that all students are assessed annually because it gives educators and parents an idea of how the student is doing and ensures that schools are paying attention to traditionally underserved populations like low-income students, students of color, students with disabilities and English language learners. The Department has not had to withhold money — yet — over this requirement because states have either complied or have appropriately sanctioned schools or districts that assessed less than 95 percent of students.”

No one is immune from racial demagoguery when it can even be turned on parents in politically correct, diversity-obsessed communities like Manhattan and Park Slope. New York is of course one of America’s bluest states, and Duncan has thus been reduced to attacking key members of the administration’s own political base to contain the opt-outs and preserve Common Core.

The federal government is flexing its muscles to protect an allegedly state-run program. Liberals are treating other liberals like they’re racist. Even the teachers’ unions are calling Common Core’s rollout “botched” and walking back their “once-enthusiastic” support for the program. It looks like the education technocracy is every bit as ineffective as the rest of our national technocracies.

Common Core will likely still roll forward (until the next grand idea comes along), but it will do so like so many other bureaucratic “reforms” — empowered by inertia, not excellence, and maintained by threats, not loyalty. In the meantime we’ll learn once again that in our immense, diverse nation, one size most assuredly does not fit all.