“Frustrated” Muslims Can’t Stop Killing Jews… and Everyone Else 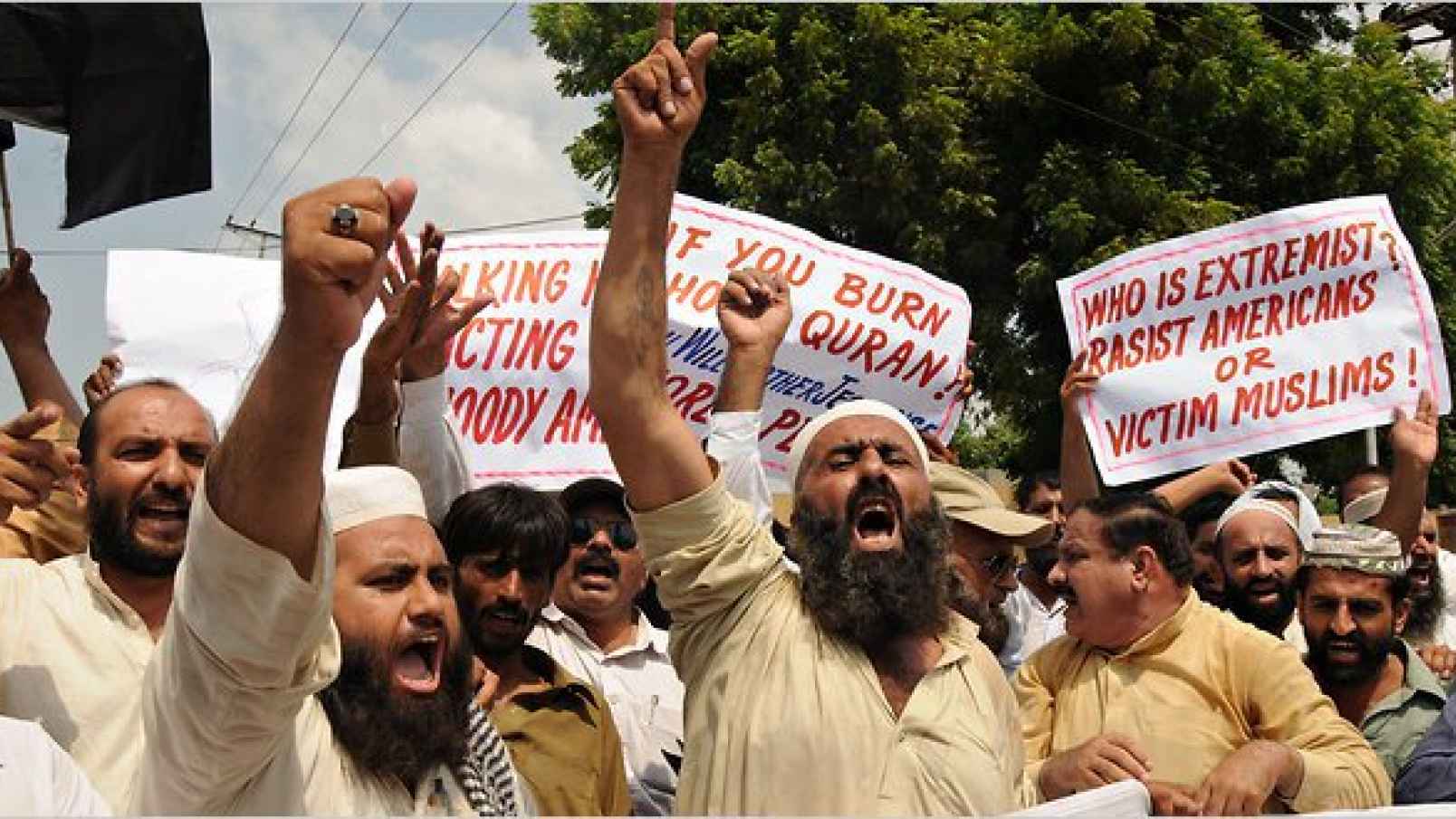 Muslim “Frustration” caused 9/11 and every other act of terror.

As Jews were being butchered in the streets of Jerusalem, Secretary of State John Kerry blamed them.

“There’s been a massive increase in settlements over the course of the last years, and now you have this violence because there’s a frustration that is growing,” the nation’s greatest diplomat said.

And who can blame Muslims for taking an axe or a knife to those frustrating Jews. Not John Kerry.

Back before 1967, Muslim terrorism had to be attributed to “frustration” at Jews living anywhere in Israel. Before Jews had an independent state or any realistic possibility of achieving one, Muslims were frustrated at Jews living. And so they strove to make the Jews into the “unliving” by murdering them.

That much hasn’t changed.

“Frustration” is one of the most common excuses for Muslim violence.  Most frustrated people just punch a wall. It takes a special sort of person to respond to frustration by ramming into a bus stop and then hacking at an elderly Rabbi with a cleaver or stabbing a 13-year-old boy on a bike.

But Muslim “frustration” is an international problem.

9/11, according to the OIC, was caused by Muslim “frustration”. Boko Haram’s bombing of churches and mass murder of Christians in Nigeria is due to “frustration”. When the Taliban blew up the Buddha statues in Afghanistan, their spokesman claimed that they did it out of “frustration” with the West.

In the UK, Jahangir Mohammed, director of the Centre for Muslim Affairs, says Muslims are “very angry and frustrated”. A Home/Foreign Office report warned that Muslim terrorism was caused by “the lack of any real opportunities to vent frustration.”

NPR tells us that French Muslims are “frustrated”. Muslim migrants showing up in Sweden are also finding “frustration” there. In fact, as far back as 1995, the New York Times informed us that “Europe’s Muslim Population” is… you guessed it; “Frustrated.”

In India, we are told that “Muslim frustration broke into violence on Direct Action Day… when after three days of dreadful slaughter 20,000 Muslims and Hindus lay dead in the streets of Calcutta.”

The textbook, “The Muslim World in the 21st Century” informs us that “Indonesia saw an outburst of the frustration against Chinese domination of the economy in 1997.” This is a nice way of saying that angry Muslim mobs ran wild murdering and raping Chinese people because they actually worked for a living.

But what other people consider psychotic behavior and war crimes is just Muslim frustration. When they get frustrated enough, Muslims have to stab a bunch of Jews in Jerusalem , rape hundreds of Chinese women or fly planes into the World Trade Center.

If only everyone else didn’t frustrate Muslims into behaving that way.

Back in the US, Political scientist M. Steven Fish claims that Muslim terrorists feel “frustration and humiliation” because the “Christians won big”. The Christians have been giving back their winnings since the 1950s, but Muslims have only been getting more “frustrated” with every Christian concession.

Fathali Moghaddam at Georgetown invented “Staircase Terrorism” (which despite the name doesn’t involve Muslims pushing non-Muslims down staircases) which claims that Muslim aggression begins with feelings of “frustration” that lead to violence.

Muslim frustration leads to aggression. When the poor dears get worked up enough, they get violent. The more their violent efforts are frustrated, the more violent they become. Before you know it, they’re throwing a suicide bomber tantrum and diplomats rush off with a pile of candy and concessions to reduce their frustration levels to slightly less murderous norms.

Instead of giving them an immigration time-out or a shock-and-awe spanking, they hunt down whoever made poor Mohammed Jr. feel so frustrated that snookums is out on the streets stabbing people.

“What do you want from Mohammed? He’s frustrated. He’s a very sensitive boy. Why can’t you be more understanding of his feelings and stop trying to fight back when he comes at you with a butcher knife?”

All this global Muslim frustration though seems to indicate that the problem might be Mohammed.

Muslims are frustrated by the Jews in Israel, the Christians in Europe, the Buddhists in Myanmar, the Yazidis in Iraq, the Hindus in India and the atheists in Bangladesh.

If there’s a religion that Muslims can live in peace with, it has yet to be discovered. If frustrated Muslims succeeded in their goal of wiping out or enslaving all non-Muslims, they would go back to taking out their “frustrations” on each other with Sunnis and Shiites slaughtering each other as they do today.

Muslim frustration is as universal as death and taxes.  If Muslims just had an issue with Israeli Jews, then it might be the fault of the Jews. But how does one explain ongoing Muslim conflicts with Christians, Hindus, Buddhists, Yazidis, atheists and even other Muslims? It can’t all be the “settlements”.

Either everyone (including other Muslims) is picking on Muslims, oppressing and frustrating them, driving them so deep into despair that they have no choice but to hack elderly Rabbis to death or rape Chinese women in Jakarta… or the Muslims are the ones picking fights with everyone else.

When one group of people is constantly bombing, stoning, murdering, raping, burning, beheading and stabbing every other religion it can get its hands on… maybe it’s the real problem.

And yet during the Scorpions’ Pass Massacre in 1954, there were no “settlements”. Despite that, “frustrated” Muslim Brotherhood Bedouin terrorists massacred eleven Israeli passengers on a bus; including a 9-year-old boy whom they shot at point blank range. A 5-year-old girl who survived found her mother had been raped and her finger had been cut off for her wedding ring.

But back then the rapists and child-murderers were “frustrated” at the existence of Israel.  So what of the Hebron Massacre in which the Jewish population was exterminated with knives and axes? Blame Zionism. Then what of the Safed Massacre in 1834? The Jewish victims were raped and murdered.  This was not to be confused with the Muslim attacks on Jews in Safed in 1838 or 1927 or 1517.

Were the Muslims frustrated by Zionism or “settlements” in 1517?

Muslim “frustration” with Jews leading to outbreaks of butchery has a long history. Because it’s not about “settlements” or even Jews. It’s not about unemployment in Europe or American foreign policy. It’s not about Myanmar’s refusal to accommodate Muslim Rohingya invaders or Chinese businesses in Indonesia. All of these are excuses for Muslims to do the terrible things they want to do anyway.

The one thing that Muslim murderers excel at is playing the victim. Someone always “made” Mohammed do it. Someone got him so frustrated and upset that he had no choice but to rape and kill.

The Muslim case for justice can be found in the books of a million police departments where all the stories begin with the criminal feeling sorry for himself and end in hospitals and morgues. The story always begins with, “I wanted what was coming to me” or “She shouldn’t have made me angry.”

We don’t put up with that behavior from individuals. Why do we put up with it from an entire culture?

There’s a place we send people who start killing when they get frustrated enough. It’s called prison. We can’t lock up the entire Muslim world, but we can lock ourselves away from it by ending migration and immigration to the civilized world from a Muslim world where frustration justifies violence.

And maybe, if Muslims get frustrated enough by this civilizational time-out, they’ll choose civilization over barbarism.