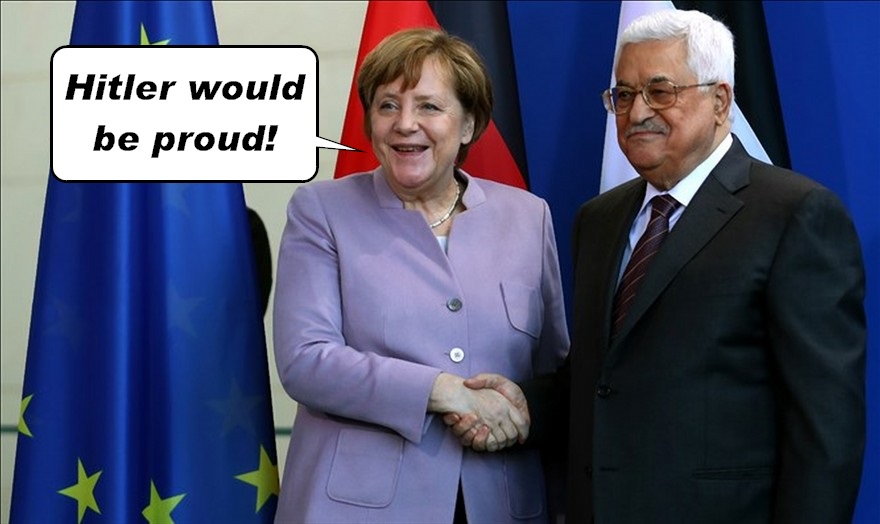 Out of all the countries in the world, Germany has no right to tell Israel what to do about anything – especially it’s own survival. It hasn’t even been a hundred years since the holocaust!

German Chancellor Angela Merkel on Friday said she was concerned about Israel’s building in Judea and Samaria, claiming the construction was undermining progress toward a “two-state solution”.

“As before, I see no reasonable alternative to the goal of a two-state solution,” Merkel told reporters before holding talks with Palestinian Authority (PA) chairman Mahmoud Abbas in Berlin, according to the Reuters news agency.

“Both the Israeli and the Palestinian people have the right to live in peace and security and none of the other options can deliver that credibly,” she said. [That means that the Jews need to make a deal with Muslim terrorists that promise to wipe them out and “push all the Jews into the sea.”]

The German chancellor claimed Israeli construction in Judea and Samaria posed “an impediment to the resolution of the conflict”. [Merkel is also the one bringing in violent Muslim jihadists that are destroying her own country.]

“I am very concerned about developments in the West Bank, which are leading to an erosion of the basis for a two-state solution,” she added, according to Reuters.

While Israel and Germany are considered to be strong allies [what a joke], there have been tensions in recent years over the peace issue. Merkel has several times insisted that the “two-state solution” is the best way to end the Israel-PA conflict while criticizing Israel over its construction.

At a Government-to-Government meeting in Berlin in December 2012, Merkel and Prime Minister Binyamin Netanyahu “agreed to disagree” over Israeli construction in areas the PA claims for a future state.

Last month, Germany delayed a summit with Israel planned for later this year, in what was reportedly a punitive measure in response to Israel’s passing of the Regulation Law.

Merkel’s comments come as the United States and Israel attempt to reach agreements over Israeli construction in Judea and Samaria.

On Thursday, talks between the sides in Washington ended without agreement.