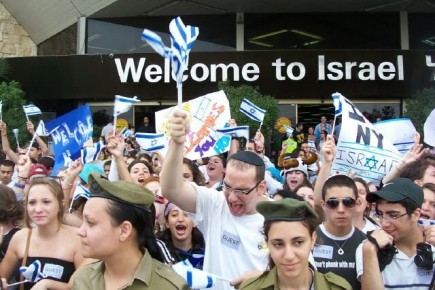 As 2014 winds to an end, the very last plane of olim (immigrants) from North America making aliyah to Israel with the organization Nefesh B’Nefesh landed on Tuesday morning, closing a record year of immigration.

The final plane held the last 60 olim, as Nefesh B’Nefesh records a 7% increase in immigrants from North America in 2014 compared to the previous year – and all that despite the summer Hamas terror war that led to Operation Protective Edge.

A total of 3,762 olim immigrated to Israel with Nefesh B’Nefesh in 2014 arriving on 17 special flights reserved for them, in addition to 525 olim from England aided by the organization.

The youngest oleh was a 20-day-old infant, while the oldest was 98. There also were roughly 350 lone soldiers from North America making aliyah to serve in the IDF without the comfort of having family in Israel, joining the 3,000 lone soldiers currently serving in the IDF.

One 19-year-old immigrant, Natalie Jacobson, decided to make aliyah from Illinois precisely because of Protective Edge.

Jacobson actively followed the news about the operation and felt she didn’t want to watch the fate of Israel from the sidelines anymore, instead taking an active part in the struggle of the Jewish state. She is to enlist in the IDF next March, and hopes to be an infantry instructor.

As for Maya Levi, a 24-year-old hailing from Los Angeles, she was in Israel during Protective Edge and experienced for herself the harrowing rocket sirens and feelings of tension. She relates that the despite the difficulties and concerns she still feels, she is certain that the place for her to establish her life is in Israel.

Her parents were sad about her moving so far away but in the end understood that it is the right decision, according to Levi.

Twenty-six-year-old Judah Stifel who made aliyah Tuesday morning from New Jersey has two master’s degrees in engineering, mechanics and robotics.

He was anxious to end his studies so as to finally realize his dream and make aliyah, and become part of the Israeli “start-up nation” pioneering the global hi-tech industry.

As Stifel exemplifies, the olim from North America are characterized by their general high level of education, with 74% arriving with at least a bachelor’s degree and 32% with masters or doctoral degrees, and able to contribute greatly to the development of Israel.

“We are wrapping up 2014 with an important achievement for the Zionist enterprise and a significant rise in the number of olim,” said Erez Halfon, Nefesh B’Nefesh Vice Chairman.

“The olim who touched down this  morning, just before the end of the civilian year, join the thousands of new olim and hundreds of lone soldiers who arrived in Israel this year,” said Halfon. “These olim are the most quality resource for Israeli society and contribute directly to our strength as a nation and society.”

Halfon concluded saying “the Nefesh B’Nefesh organization will accompany the olim in the process as they are incorporated into the society and IDF, and will continue to act in the coming years in its mission for aliyah from North America and for the strength of the state of Israel.”