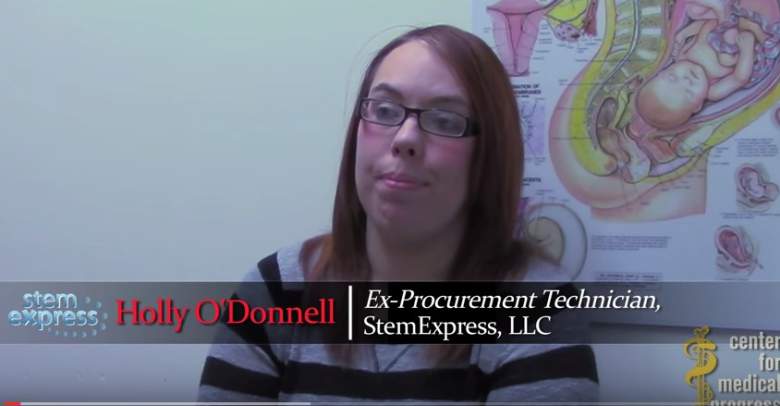 The Center for Medical Progress (CMP) released a seventh investigative video August 19 featuring former StemExpress tissue technician, Holly O’Donnell, as she detailed how she “cut” open an aborted baby boy’s head with scissors while his heart was still beating. “It had a face,” she said. “It had eyelids.”

According to CMP, O’Donnell served as a procurement technician for StemExpress, a biotech company in northern California that, until last week, partnered with Planned Parenthood to obtain aborted baby parts in the name of research.

In the video, O’Donnell told the story of a nearly fully intact late-term baby boy aborted at Planned Parenthood Mar Monte’s Alameda clinic in San Jose, CA which performs abortions up to 20 weeks.

“I’m in the hallway, I see the jar [holding the baby] come out” of the operating room, O’Donnell began. She soon heard her supervisor, Jessica, “preparing it, rinsing out the jar, rinsing out the linen wrapping that catches it, dumping it in the strainer, rinsing it off…”

When she first laid eyes on the baby boy, O’Donnell said she was “flabbergasted.” “This is the most gestated fetus and closest thing to a baby I’ve seen,” she remarked.

But what happened next shocked her even more.

After calling O’Donnell over to “see something kind of cool,” Jessica, “just taps the heart [with an instrument] and it starts beating.” O’Donnell reacted, “And I’m sitting here and I’m looking at this fetus, and it’s heart is beating, and I don’t know what to think.”

Referring to the beating heart, O’Donnell continued, “I don’t know if that constitutes it’s technically dead, or it’s alive.”

“It had a face,” she said. “It wasn’t completely torn up, and it’s nose was very pronounced, it had eyelids, and it’s mouth was pronounced.”

When Jessica advised procuring the brain, O’Donnell realized with dread, “that means we’re going to have to cut the head open.”

As her supervisor, Jessica explained that “what you do is you go through the face.” O’Donnell then described how Jessica “takes the scissors and she makes a small incision right here [gestures to chin] and goes, I would say, to maybe a little bit through the mouth.”

She then asked O’Donnell to go “the rest of the way” and handed her the scissors.

After “finishing going through the rest of the face” and placing the baby’s brain in a container, O’Donnell asked herself “What did I just do?”

When she placed his remains in a biohazard container, he “got stuck on the lid” she recalled. “His buttocks was in the air and his two feet were like dangling out,” she said, “and I remember having to pick each one of his feet up and put him in the container and close the lid.”

“I remember holding that fetus in my hands when everybody else was busy and started crying,” she said of her response to the baby boy. “It’s just really hard knowing that you’re the only person who’s ever going to hold it, that baby.”

Nothing could justify her actions, O’Donnell admitted.

“Even it if it’s gonna be good, if that could have been the cure for some kind of disease, then I wish, even if it was, I wish I still wouldn’t have done it,” she said.

She wondered if the aborted baby could have “grown up to be” a firefighter or the next president. But instead, he was now a “waste of life.”

“Life isn’t a mistake,” she said. “I mean, getting pregnant, it can be an accident, but it’s not a mistake.”

According to CMP, state and federal law “require that the same treatment be given to an infant born-alive after an abortion as to a normally delivered baby.” Citing California Health and Safety Code 123440, CMP stressed that “California law also prohibits any kind of experimentation on a fetus with a discernible heartbeat.”

In addition to O’Donnell, the video showed video clips of Dr. Ben Van Handel of Novogenix Laboratories and Perrin Larton of Advanced Bioscience Resources, Inc. (ABR) — both of which work with Planned Parenthood. In the video, Van Handel confessed, “There are times when after the procedure is done that the heart actually is still beating,” while Larton told of abortions where “the fetus was already in the vaginal canal whenever we put her in the stirrups, it just fell out.”

The video, following last week’s showing how abortion workers “would just take” baby parts without consent is part of CMP’s years-long investigative study into Planned Parenthood, “Human Capital.” This particular video is the third episode of a web series documentary produced by CMP, the first of which also featured O’Donnell.

Planned Parenthood received more than $528 million in taxpayer funding during the fiscal year 2013-2014. That amounted to more than $1.4 million per day, through government grants, contracts and Medicaid reimbursements.

Since the release of CMP’s first video, the networks have proved hesitant to publicize the story — and when they do, they refuse to even utter the word “baby.”

Not even a week ago, MRC Culture found that the the networks spent an embarrasing total of 0.008% of their news shows playing the CMP footage exposing Planned Parenthood: 1 minute, 13 seconds out of 243 hours and 30 minutes.

From the beginning, the liberal media raced to defend Planned Parenthood. In the first 9 hours and 30 minutes of news shows broadcast after the story broke, ABC, NBC and CBS, spent only 39 seconds on the first video. It took more than 24 hours before all three covered the story. In the week after the first video, the networks gave a mere 9 minutes and 11 seconds to the story (in contrast, the networks devoted more than three times that to the Susan G. Komen controversy, when the charity temporarily decided to defund the abortion giant).

Also during their news shows, ABC, NBC and CBS covered the shooting of Cecil the lion more in one day than they did these videos in two weeks. That discrepancy continued even after three weeks since the release of the first CMP video.

The three networks haven’t mentioned the content of CMP’s fifth or sixth video once.

The media similarly stayed silent on the case of Philadelphia abortionist Kermit Gosnell. Gosnell’s trial, in which witnesses described baby abortion survivors “swimming” in toilets “to get out,” attracted a scant 12 – 15 reporters. Only after 56 days, multiple letters from members of the House of Representatives and a public outcry, did all three broadcast networks report on Gosnell.

Will the media stay silent on this latest video?

In a press release, Kristan Hawkins, president of Students for Life of America, compared Gosnell to the latest video.

“Planned Parenthood knew what was going on behind the closed doors of the ‘House of Horrors’ at Kermit Gosnell’s clinic in Philadelphia yet they never reported him – because they were doing the same thing in their facilities,” she challenged. “Gosnell’s abortion facility was closed down and he sits in prison today for the murder of babies born after failed abortions, which is exactly where Planned Parenthood needs to be.”

“Planned Parenthood can claim that they are harvesting the body parts of aborted babies for research that may help save lives someday. But they are dismembering babies with a beating heart to do so. Is that worth it?” she asked. “Hell no.”

“Philadelphia abortionist Kermit Gosnell is serving life in prison because he killed babies who were still alive when they came out of the mother’s body,” he said. “If Planned Parenthood is not fully investigated and prosecuted for these offenses, then we owe Gosnell an apology.”

Lila Rose, President of Live Action, reacted to the video showing “a fully formed baby still intact with a heart still beating as technicians carve his little face in order to harvest a brain.”

“It is difficult to even speak of such horror, and yet our nation allows and even funds these atrocities against our weakest children,” she said in a press statement. “It is time to protect women and children by defunding and shutting down the abusive and criminal enterprise that is Planned Parenthood.”

For CMP, Project Lead David Daleiden responded to his video of, “heartrending admissions about the absolute barbarism of Planned Parenthood’s abortion practice and baby parts sales in which fetuses are sometimes delivered intact and alive.”

“Planned Parenthood is a criminal organization from the top down and should be immediately stripped of taxpayer funding and prosecuted for their atrocities against humanity,” he challenged.