The media has chosen tonight to throw everything including the kitchen sink at Trump today with four different allegations of sexual harassment.

First the New York Times says two women were groped by Trump, one at Trump Towers and another while on an airplane with him:

At that moment, sitting at home in Manhattan, Jessica Leeds, 74, felt he was lying to her face. “I wanted to punch the screen,” she said in an interview in her apartment.

More than three decades ago, when she was a traveling businesswoman at a paper company, Ms. Leeds said, she sat beside Mr. Trump in the first-class cabin of a flight to New York. They had never met before.

About 45 minutes after takeoff, she recalled, Mr. Trump lifted the armrest and began to touch her.

According to Ms. Leeds, Mr. Trump grabbed her breasts and tried to put his hand up her skirt.

Ms. Crooks was a 22-year-old receptionist at Bayrock Group, a real estate investment and development company in Trump Tower in Manhattan, when she encountered Mr. Trump outside an elevator in the building one morning in 2005.

Aware that her company did business with Mr. Trump, she turned and introduced herself. They shook hands, but Mr. Trump would not let go, she said. Instead, he began kissing her cheeks. Then, she said, he “kissed me directly on the mouth.”

“It was so inappropriate,” Ms. Crooks recalled in an interview. “I was so upset that he thought I was so insignificant that he could do that.”

Here’s how Trump responded to the New York Times:

The first one is this: 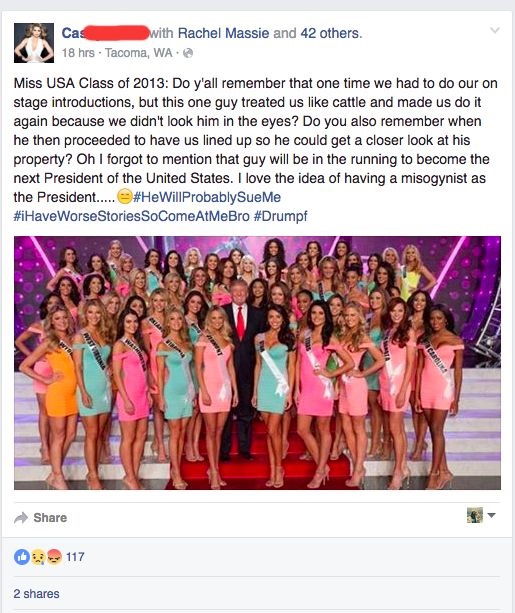 The second one is this:

Watching at home in Palm Springs, Fla., McGillivray said she rose from her couch and yelled at the TV screen: “‘You liar!’’’

McGillivray, 36, said she was groped by Trump at Mar-a-Lago 13 years ago. She said she never reported it to authorities.

But her companion that day, photographer Ken Davidoff, vividly remembers when McGillivray pulled him aside moments after the alleged incident and told him, ‘’Donald just grabbed my ass!’’

The New York Times reported Wednesday that two other women came forward to say Trump groped them — one who sat next to him on a flight 30 years ago and another who encountered him outside an elevator at Trump Tower.

“There is no truth to this whatsoever,” Hope Hicks, Trump’s press secretary, said about McGillivray’s allegation when reached by The Post Wednesday night. “This allegation lacks any merit or veracity.”

AND then there’s this from CBS:

Meanwhile… Trump said of 10-year-old girl: “I am going to be dating her in 10 years. Can you believe it?” https://t.co/h7KaFDtaek

In an “Entertainment Tonight” Christmas feature in 1992, Trump looked at a group of 10-year-old girls and said he would be dating one of them in ten years. At the time, Trump would have been 46 years old.

The video, released Wednesday evening, was shot at Trump Tower.

In the clip, Trump asks one of the 10-year-old girls if she’s “going up the escalator.” When the girl replies, “yeah,” Trump turns to the camera and says: “I am going to be dating her in 10 years. Can you believe it?”

But hey.. at least he’s not Hillary!

Trump bragged about his ability to sexually assault women. Multiple women in multiple states accuse him of exactly that. You do the math.