GW Bush on Obamas: ‘We Just Took to Each Other’ 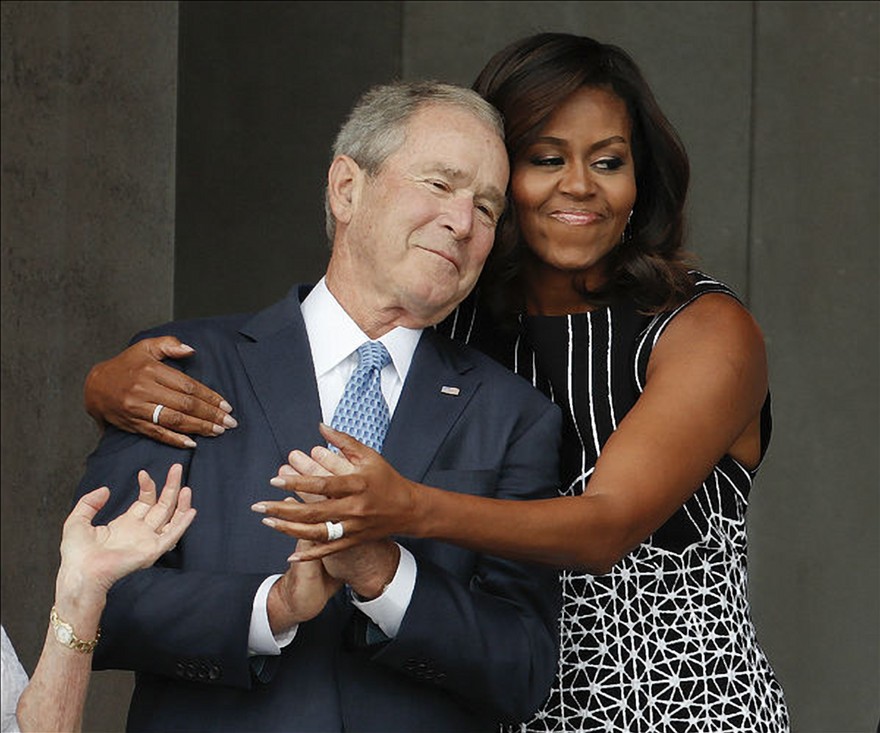 Please just get a room.

Washington is so full of phonies. Ten years ago, no one would have believed this. Where are the real conservatives?

In an interview with People magazine to publicize his first art book and exhibit, “Portrait of Courage: A Commander in Chief’s Tribute to America’s Warriors,”

Bush said of the hug: “When I saw her, it was a genuine expression of affection.”

Bush told the outlet he was regularly seated beside Michelle Obama at official events like Nancy Reagan’s memorial service, an interfaith memorial service for Texas police officers last year, and at the September 2016 dedication ceremony in Washington, D.C., to mark the opening of the Smithsonian’s National Museum of African American History and Culture, where they were pictured in the hug.

“I can’t remember where else I’ve sat next to her, but I probably have a few wise cracks and she seemed to like it okay,” Bush told People. “I needle her a little bit and around her, I’m fairly lighthearted. [The Obamas] are around serious people all the time and we just took to each other.”

Asked about that sweet hug at Smithsonian, he said: “When I saw her, it was a genuine expression of affection.”

Bush said he also shares her interest in working with military personnel, military families and veterans  — and hopes he and Laura Bush will work with both Michelle and former President Barack Obama.

“I think they’re interested in, also, doing things with our troops of course now in their after-life, as I call it,” Laura Bush told People.

George W. Bush added: “It’s going to take them a while to find their footing and figure out how they’re going to do what they want to do. But if there’s a way to be symbiotic, we’ll do so.”