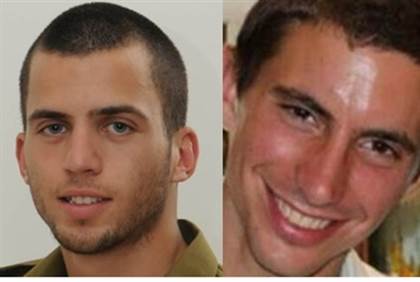 Hamas leader Khaled Mashaal has introduced strict conditions for any future transaction with Israel regarding the return of the bodies of two soldiers killed in Operation Protective Edge.

Last October, there was talk in Hamas of a swap of Arab terrorists in exchange for the bodies of Givati Brigade officer Hadar Goldin and Golani Brigade combat soldier Oron Shaul, although the deal never materialized.

Now, in an interview with Tayaf radio in Gaza, Mashaal said Hamas would not sign any agreement to release terrorists in exchange for the bodies, “before Israel fulfills its earlier commitments regarding the release of prisoners” – a reference to the fourth tranche of terrorist releases Israel halted in 2014 after the Palestinian Authority (PA) and Hamas declared a unity government.

Mashaal also demanded that all terrorists rearrested after being released during the 2011 Gilad Shalit deal be re-released.

He added that Hamas is increasing pressure on Israel to force it to release more terrorists, which it views as top priority – and vowed to bring IDF commanders who defended Israel during Hamas’s barrage of over 3,000 rockets on Israeli citizens during summer 2014 to trial in the International Criminal Court (ICC).

The remarks echo an earlier report from Israel Radio last month, whereby Jerusalem reportedly reached out to Germany and other sources in Europe to negotiate the bodies’ release.

Hamas reportedly responded and clarified it will not discuss the return of fallen IDF soldiers until Israel releases the 63 Arab terrorists freed in the 2011 Gilad Shalit deal who were since rearrested for returning to terrorism. A total of 1,027 terrorists were released in the deal.