Hamas is Worse than the Islamic State 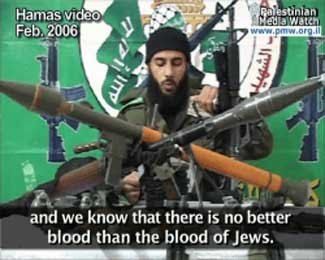 The word “Islamo-Nazism” is largely taboo, yet it well represents the ideology of Muslim terrorist organizations. The dominant and most horrible of these criminal bodies, so far, is the Islamic State (IS). The German author and former Christian Democrat parliamentarian, Jürgen Todenhöfer, recently visited IS in Iraq and Syria, where he exchanged views with some of its leaders and followers.

After his return, Todenhöfer said that the IS people are fully convinced, “that they fulfill a historic mission. They think that they live the only true religion, and want to spread it with the sword in the entire Middle East, and then in the entire world.” Apart from “the religions of the book”, i.e., Muslims who follow the IS version of Islam, as well as Jews and Christians, IS wants to destroy all other religions. Todenhöfer explained that there were no further exceptions among people meant to be killed by IS.

Todenhöfer added, “According to the IS ideology, all Muslims which accept democracy have to die. That is because these people put the laws, which in a democracy are made by humans, above those laws given by God. The IS speaks openly about hundreds of millions of deaths of those, which in a ‘religious cleansing’, have to be sacrificed.”

In his conversations with the IS representatives, Todenhöfer told them that he had frequently read the Koran, and that he understood Islam to be a merciful religion. “I asked them, where is your mercy?  The reply always was that that [mercy] also existed in the Koran, but nowadays it is the time of the sword.”[1]

The Islamic State’s message of planned mass murder that Todenhöfer brought back was clear. Experts confirm that IS closely follows sharia law and that there are many precedents for their views in the history of Islam.[2] Yet some Western whitewashers falsely claim that IS has nothing to do with Islam. U.S President Barack Obama has admitted that the organization is pure evil.[3] He also claims, falsely, that IS is “not ‘Islamic.’”[4]

This false attitude is shared by British Prime Minister David Cameron, who stated about IS, “They boast of their brutality. They claim to do this in the name of Islam. That is nonsense. Islam is a religion of peace. They are not Muslims, they are monsters.”[5]

Regarding one particular issue of their ideological program, Hamas is more extreme and more murderous than the Islamic State. IS intends to spare Christians and Jews. Hamas, however, says in its Charter in Article 7, “The Day of Judgment will not come about until Moslems fight the Jews (killing the Jews), when the Jew will hide behind stones and trees. The stones and trees will say O Moslems, O Abdulla, there is a Jew behind me, come and kill him. Only the Gharkad tree…would not do that because it is one of the trees of the Jews.”[6]

During last summer’s Protective Edge campaign, Hamas made calls, yet again, for the murder of all Jews. Hamas TV also broadcast a sermon repeating the Hamas ideology which claims that according to Islam, it is Muslim destiny to exterminate the Jews.[7]

There were hundreds of foreign journalists in Gaza and Israel during the Protective Edge campaign, who wrote thousands of articles. One would have to check carefully to see whether there was a singular mention of the term Islamo-Nazism in any of their articles about Hamas, or if any mentioned a comparison between Hamas and Nazis, or contained direct quotes from Hamas about the planned extermination of all Jews in their pursuit of pleasing Allah. It would not be surprising if not even a single such quote were to be found.

Clemens Wergin, who writes in the German daily Die Welt, investigate and publish facts about how much Nazi ideology has influenced Muslim terrorist groups. He writes that the ideology of extreme Muslim groups such as Al Qaeda, Al Nusra and IS take their ideas from a deeply anti-Western ideology. Wergin remarks that such was also the case with the Nazis. He adds that IS has drawn its original inspiration from the worst European traditions. Wergin sees parallels between IS ideology and Hitler’s ideology of “the total war” and their extermination of Jews and Eastern Europeans. Wergin adds, “Fortunately enough, the Islamist terrorists do not have the means to translate their destruction fantasies into reality on a great scale.”[8]

The near total failure of journalism to deal with the similarity between extreme Islam and Nazism leaves mainly a few scholars to quote on the subject. They bring weighty arguments to compare the attitudes of the sizable extremist movements in the Islamic world with those of the Nazis.

The Israeli Holocaust scholar, Yehuda Bauer, pointed out in 2009:

“Today for the first time since 1945, Jews are once again threatened openly by a radical Islamic genocidal ideology whose murderous rantings must be taken more seriously than the Nazi ones were two and more generations ago. The direct connection between World War II, the Shoah, and present-day genocidal events and threats is more than obvious. The Shoah was unprecedented; but it was a precedent, and that precedent is being followed.[9]

Anti-Semitism historian Robert Wistrich writes that hard-core anti-Semitism in the Arab and Muslim world is only comparable to that of Nazi Germany. He explains that Muslim hatred for Israel and Jews is “an eliminatory anti-Semitism with a genocidal dimension.” As for common elements between Muslim and Nazi anti-Semitism, Wistrich cites fanaticism, the cult of death, the nihilistic wish for destruction, and the mad lust for world hegemony.[10]

Richard Prasquier, former head of CRIF, the umbrella organization of French Jewry, compared radical Islam with Nazism. He noted two important common features. The first is that Jews are the prime enemy for both movements and anti-Semitism is an essential component of their ideology. The second feature is that both Nazism and radical Islam dehumanize Jews.[11]

American historian Richard Landes remarked that “future historians will probably find that present anti-Semitism in Arab and Muslim societies reached an even higher fever pitch than that of the Nazis.”[12]

In 2013, during an interview on the Europe 1 television program Télé, former French Education Minister and philosopher Luc Ferry compared modern Islamism with the Nazism of the 1930s. He said, “Terrorism today somehow represents the equivalent of Nazism. I don’t exaggerate by saying that radical Islam today, and of course I am not talking about the Muslim religion but radical Islam and anti-Semitism, are the bane of people, of human life. It is as atrocious as Nazism in the ’30s.” Ferry also warned that radical Islam is not merely like an isolated “local guerrilla” faction, but a global problem and a portent of a third world war.[13]

Israel’s government and military forces have so far prevented Hamas, the largest democratically elected Palestinian party from carrying out their “destruction fantasies” on a scale which approaches in any way that of the Islamic State movement. Yet Israel has almost entirely abstained from publicizing the Islamo-Nazi character of Hamas and where the horrors they promote even exceed the plans of the Islamic State.

The quotes above regarding the characteristics of Islamo-Nazism can provide the raw material for an Israeli publicity campaign about the real nature of Hamas. Such a campaign is urgently needed, the more so as the UN Security Council is about to consider a resolution recognizing a [so-called] “Palestinian” state.

Dr. Manfred Gerstenfeld – The writer has been a long-term adviser on strategy issues to the boards of several major multinational corporations in Europe and North America.He is board member and former chairman of the Jerusalem Center for Public Affairs and recipient of the LIfetime Achievement Award (2012) of the Journal for the Study of Anti-Semitism.

[9] Yehuda Bauer, “Reviewing the Holocaust Anew in Multiple Contexts,” Post-Holocaust and Anti-Semitism, 80, 1 May 2009.