Hamas terrorists celebrate: We won the battle over Temple Mount; Calls for “day or rage” this Friday 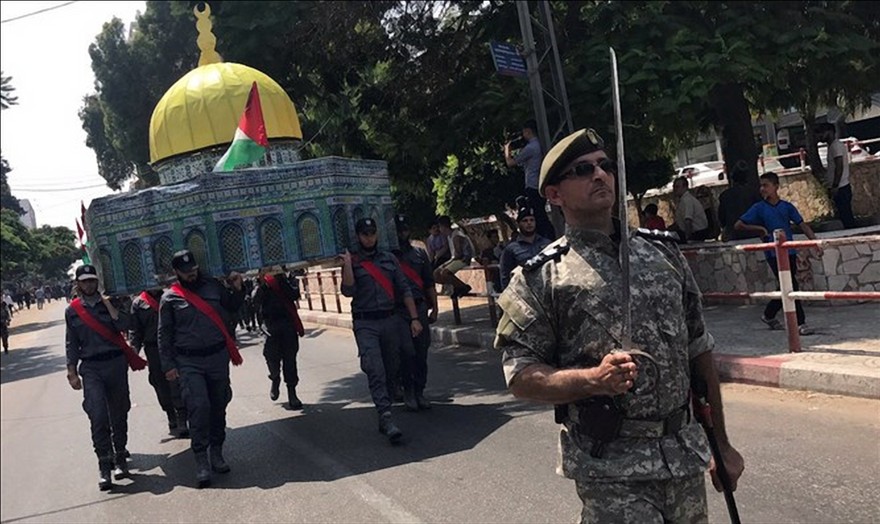 Hamas terror group claims victory due to Netanyahu caving to terrorism and removing metal detectors and cameras from Temple Mount. Now they are calling for ‘Day of Rage’ this Friday. Giving in to terrorists only creates more terror and murder.

The Hamas terror organization held on Wednesday a march in the Gaza Strip celebrating Israel’s dismantling of the metal detectors on the Temple Mount.

During the march, which took place under the heading of “Victory in the battle over Al-Aqsa Mosque,” members of Hamas’ military wing marched through the streets of Gaza City, bearing [so-called] “Palestinian” flags and a model of the Dome of the Rock Mosque.

Similarly, Hamas called on supporters in Judea and Samaria to hold a “Day of Rage” on Friday and to confront Israeli security forces, as a “[reaction] to recent events in order to deter Israel from continued infractions against our nation and our holy sites.”

On Monday night, the Security Cabinet decided to remove the metal detectors from the Temple Mount, and the detectors were subsequently taken down, along with the existing security cameras on the Mount.

The Cabinet, however, declared that it would instead install “smart check” monitoring technology on the Mount within the next six months, and allocated a budget of up to 100 million shekels for this purpose.