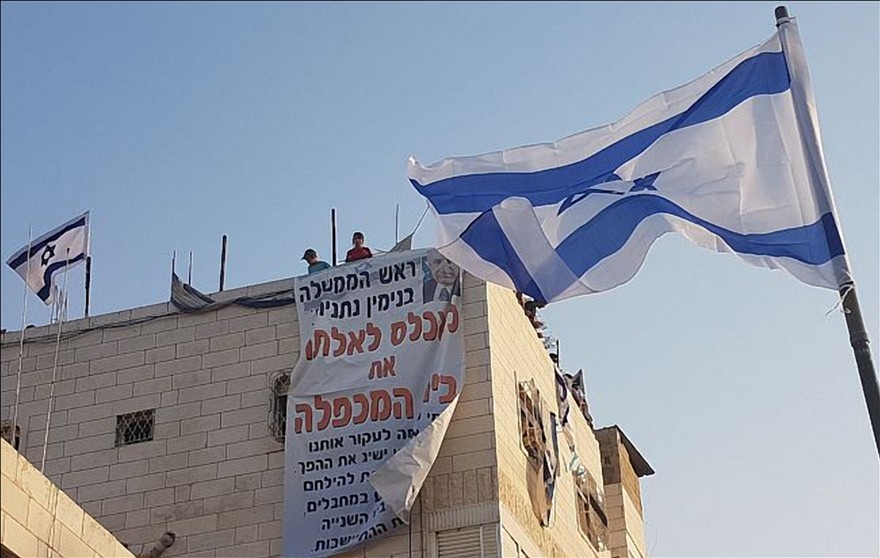 If all the Jewish people were this brave, there would be an end to terrorism in Israel.

Dozens of heroic Hebron residents retook the Hebron building known as Beit HaMachpela late Tuesday afternoon in what they called a response to the massacre of three members of the Salomon family in Neve Tsuf last Friday.

Some 15 families were believed to have entered the three-story building near the Cave of the Patriarchs, which they purchased from private owners living in the [PLO] Authority.

In 2015, the IDF Civil Administration rejected their ownership of the building, claiming they had not “proven purchase of the property, nor the possession of it,” discounting the documents that were submitted to substantiate ownership.

Knesset member Tzipi Hotovely visited the building in 2012, telling a reporter in an interview that it made no sense for the government to evict the residents; the building was purchased in “a most legal way,” she said. “King David started his kingdom here,” she reminded.

Minister of Jerusalem Affairs and Minister of Environmental Protection Ze’ev Elkin praised the residents’ actions at a meeting of the Likud Knesset faction. Elkin called on the prime minister and the defense minister to allow the families to remain in the building as an “appropriate nationalist response.”

Hebron residents have occupied the building before in the past, but were evicted twice, in 2009 and 2015 [simply for being Jewish].

It is considered a capital offense in the [PLO] to sell property — particularly land — to a Jew. Anyone who does so automatically receives the death sentence. As a result, when such a transaction comes to light, oftentimes the seller denies having made the sale, or claims the signature was forged, thus invalidating the document.

Jewish purchasers have little defense against these tactics, especially in an environment in which both governments are juggling various other priorities that preclude allowing the sale to go through. But at this point, the two governments are no longer in communication at all.

Over the weekend, [PLO] leader Mahmoud Abbas seized the opportunity in light of the escalating tensions and Arab violence to “declare the suspension of all contacts with the Israeli side on all levels until it cancels its measures at Al Aqsa mosque and preserves the status quo.”

The move frees Abbas of the need to resume final status talks with Israel under the sponsorship of the United States and the rest of the Middle East Quartet of nations, without preconditions.

The Palestinian Authority’s leading Fatah faction, also headed by Abbas, has been a major factor in the incitement of violence and “days of rage” since three Israeli Arab terrorists murdered two Israeli police officers on the Temple Mount nearly two weeks ago.

In response, Israel installed metal detectors to prevent anyone else from smuggling guns into the compound, as did the terrorists with the help of an accomplice. Fatah, Jerusalem Grand Mufti Mohammed Ahmed Hussein, Turkey’s President Recep Tayyip Erdogan and the Jordanian Parliament, among others have been at the forefront of Arab agitators urging Israeli and [PLO] Muslims to “rescue Al Aqsa Mosque and Jerusalem from the occupation.”

Days of rage, general strikes, violent riots, outright attacks on Jews and Israelis on both sides of the so-called Green Line and other incendiary actions are all part of what appears to have been an orchestrated wave of terror that was being held in abeyance until [Arab Muslims] could find an excuse to launch it. Al Aqsa-related issues have always provided the fuel for such flames.

“Beit HaMachpela was purchased several years ago, but the government of Israel shamefully prevents the families from taking up residence in the property they purchased without any legal or moral justification,” representatives of the 15 families who have retaken Beit HaMachpela said in a statement.

“At this time when Jewish blood is being spilled, we call on the government to proudly raise the flag of settlement in the Land of Israel. In the face of the murder of Jews and national stammering, we demand that the government of Israel allow the families to take up residence at Beit HaMachpela forthwith,” they added.