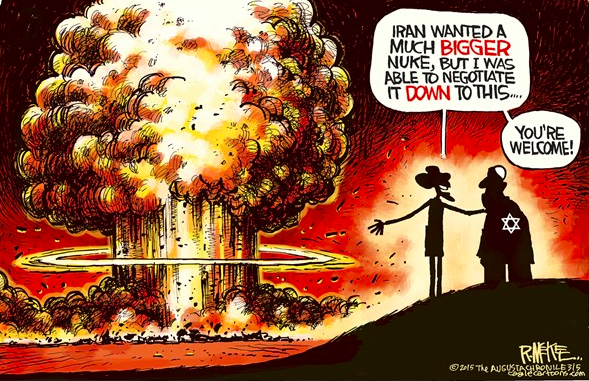 Hillary Rodham Clinton praised the nuclear deal with Iran on Tuesday as an “important step,” saying the agreement would end up “putting the lid on Iran’s nuclear program.”

Clinton was on Capitol Hill for a series of closed-door meetings with congressional Democrats, where she’s been detailing her early work on the landmark agreement and expressing her support for the final deal — the result of nearly two years of intense negotiations.

House Democrats who met with Clinton described her as a strong backer of the program, which aims to curb Iran’s nuclear program for more than a decade in exchange for billions of dollars in international sanctions relief.

Rep. Xavier Becerra, D-Calif., said Clinton “talked about the fact that no deal is ever going to be a perfect deal. But we have to have a deal that not just works but measurably moves us in the direction that we hope to achieve.”

Still, Clinton warned that the agreement would not end Iran’s “bad behavior” in the region, such as sponsoring terrorist actors, and noted that the country remains a major threat to Israel.

“This agreement will have to be enforced vigorously, relentlessly,” she said, noting that President Barack Obama called her last night to inform her that a deal had been reached. “As president, I would be absolutely devoted to assuring the agreement is followed.”

With the deal between the world powers now finalized, Congress has 60 days to assess the accord and decide whether to pursue legislation imposing new sanctions on Iran or prevent Obama from suspending existing ones. As Obama’s secretary of state, Clinton helped set the talks in motion. Her background, coupled with her status as the Democratic presidential front-runner, means her opinion carries significant weight with skeptical congressional Democrats.

“She’s one of two of the most important, most influential voices in this debate, the other being President Obama,” said New York Rep. Steve Israel, who met with Clinton on Tuesday morning. “Her opinion is critically important, profoundly important.”

The proposal has been assailed by Republican presidential candidates, who say it does not go far enough to prevent Iran from obtaining nuclear weapons, setting up a potential foreign policy clash in the 2016 campaign.

Once Obama entered the White House, “we inherited an Iranian nuclear weapons program and we had to figure out what we were going to do about it,” Clinton said. An agreement, however, would not be a cure-all, she said.

“Just because we get the nuclear deal, if we can get it done, doesn’t mean we’re going to be able to be breathing a big sigh of relief,” Clinton said.

Later in the day, Clinton planned to stop by a weekly luncheon of Senate Democrats — a meeting that will also be attended by Vermont Senator Bernie Sanders, who is challenging her for the Democratic presidential nomination.