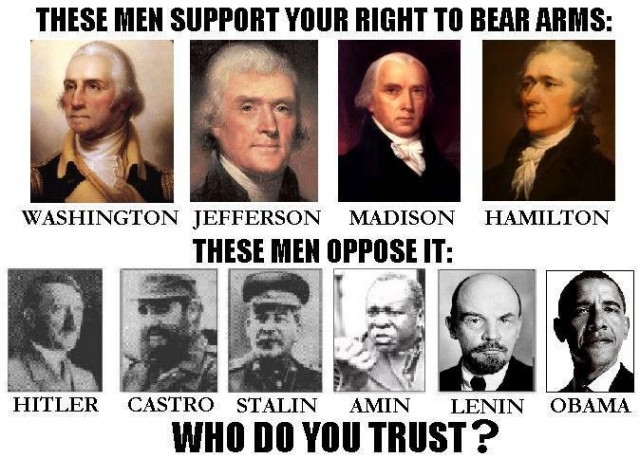 One of the issues that liberals and gun control advocates are most loath to discuss is how heavily and effectively totalitarians and mass murderers have relied upon gun registration and other firearms controls to round up “enemies of the state.” Hitler, Stalin, Castro, and Mussolini all seized upon gun laws to punish, incarcerate, and even exterminate their opponents, while permitting their own evil cliques to expand and strengthen the state and party monopolies on gun ownership.

Stephen P. Halbrook, an attorney and Research Fellow with the Independent Institute in California, has written a remarkably well-documented analysis of how Adolf Hitler and his Nazi henchmen in the government made private, “unauthorized” gun ownership a capital crime, while using registration records to effectively turn ordinary Germans into instant criminals.

Halbrook’s book took 15 years to research and write, and he relied on German archivists and translators to assist him in plowing through original records and files from 1920s, ’30s, and ’40s Germany. The result is Gun Control in the Third Reich, a fascinating, readable, informative and important book.

Conservatives, libertarians, and pro-Second Amendment advocates who believe or presumed that Hitler initiated all of the gun controls of the era will be disabused of that misinformation by Halbrook. We learn from him that extensive gun registration and controls were actually implemented by liberal Weimar Republic leaders in the late 1920s. In those days, Berlin and other German cities were repeatedly rocked by violent street battles between Communist and Nazi thugs, with police often bearing the brunt of the confrontations. For example, during Communist-led confrontations in Berlin, one Erich Mielke murdered two police captains, earning his Communist “street cred,” while cavalierly creating orphans. Mielke escaped prosecution by making his way to the Soviet Union, where he remained until the Nazi defeat in 1945. Mielke thereupon joined the East German Secret Police (STASI), where a frightening bureaucracy relied on hundreds of thousands of informers, while internal “professionals” were refining new ways to physically and psychologically torture countrymen whose loyalty to the state was under review.

Mielke clawed his way to become director of the STASI in 1957, where he remained a feared and hated presence until the collapse of the Communist government in 1989.

In 1931, the Berlin police recorded the murders of 47 members of the Nazi Brownshirts (SA), and 80 members of the Communist Rotfront (Red Front), mostly in street battles with each other. In this sort of environment, German liberals of the day were hoping that gun registration and controls would restrain the violence racking their urban centers. In a lesson for future jurisdictions considering new restrictions on private ownership of firearms, it became obvious that neither the Nazis nor the Communists registered or turned in their weapons. Ordinary, law-abiding Germans did register their legally owned guns. But they were no threat to public tranquility.

On October 4, 1938, Nazi police arrested one Alfred Flatow in Berlin. His crime: being a Jew in lawful possession of a firearm. Lawful because he had dutifully registered his guns in January 1932, complying with the pre-Hitler anti-firearm decrees of the Weimar Republic. The arresting police were probably unaware that Flatow won Gold and Silver medals for Germany in the 1896 Olympics. He had also served in the German army in the 1890s.

As Weimar leaders were implementing their gun registration initiatives, they stressed how lists of gun owners and registrants had to remain confidential and needed to be kept away from “radical elements.” Less than a year later, Hitler took control of the national government, and his minions did gain possession of the entire national list of gun registrants. The Nazis used the registration lists to identify Jews, Roma, and other “enemies” who possessed firearms, so they could be disarmed.

In 1942, the Nazi government ordered Flatow to be deported. This action was protested by some of his Christian teammates from the 1896 German Olympic team, but to no avail. In October he was transported, along with 1,021 other deportees, to the Theresienstadt Concentration Camp. In December, the 73-year old Alfred Flatow died at the camp, of starvation.

The Weimar gun control law of 1928 allowed police to deny firearms ownership to any “unreliable” person. The Nazis seized on this language, eventually making unauthorized ownership of guns and other weapons a very serious crime. As the Nazis were consolidating their power in the 1930s, there were two incidents where young male Jews, acting alone, assassinated Nazi leaders. In Paris, a young man shot and killed a German diplomat, and in Switzerland, the leader of the local Nazi party was also fatally shot. After each incident, the Nazis used the Ministry of Propaganda to demonize all Jews, and moved to restrict Jewish access to weapons. The Paris incident became the excuse for sparking the terrible “Kristallnacht” pogrom, where synagogues were set ablaze, Jewish stores were looted, and many Jewish citizens were beaten by brownshirted thugs.

On November 10, 1938, the Nazi Interior Department formally decreed that persons defined as Jews under the infamous Nuremberg Laws were prohibited from possessing any types of weapons. They declared that Jews possessing weapons would be subject to 20-year sentences in concentration camps. In the nations and territories invaded and occupied on Hitler’s orders, private gun ownership was punishable by death.

The Nazis also moved to control others who possessed weapons. Despite protests, the government banned all voluntary “shooting clubs” (Schuetzenvereine) in Germany. These clubs were popular forms of recreation across the nation, and many club leaders opposed the ban and even expressed objections to the Nazi government. As Hitler was rapidly centralizing and broadening his powers, he dissolved all local and independent shooting and sports clubs on May 10, 1933. Two weeks later, he created the Nazi-controlled German Shooting Sport Association (Deutscher Schiesssportverband), which became another mouthpiece for the Nazi government and, with war on the horizon, a source of males already trained in marksmanship.

Though Hitler would declare war on the United States a few days after his Japanese allies conducted the infamous sneak attack on Pearl Harbor, Hawaii, it is a tragic irony that American technology helped the Nazis to identify armed Jews and other potential adversaries with registered weapons.

The German subsidiary of IBM (Deutsche Hollerith Maschinen Gesellschaft) provided the dictatorship with its new punch card and card-sorting system, allowing for an enormous amount of data (particularly for the 1930s) to be stored in 600 punch hole possibilities per card. This was very useful to the “census” reports that Nazis were assiduously compiling and cataloguing.

In addition to seeking ordinary information about individuals living in each household, the Nazis added a nefarious question in column 22: German citizens had to provide information on their religious affiliation, with Protestants getting punch hole #1 marked, Catholics #2, and Jews identified via punch hole #3.

Then, with a simple cross-reference with the nation’s gun registration lists, Hitler’s henchmen easily identified those Jews with legally registered firearms.

Earlier this year while in Berlin, I rented a car and drove about 20 miles to the north to tour the notorious Sachsenhausen Concentration Camp. First built as a pre-war facility to detain opponents of the Hitler regime, Sachsenhausen was later used to imprison gypsies (now Roma), homosexuals, prisoners of war, and Jews. About 105,000 Jews perished there, and notables such as a former Chancellor of Austria, the 1935 Nobel Peace Prize winner, and courageous Christian resistance leader Martin Niemöller were held there.

German curators and researchers have done an outstanding job of cataloguing the murdered and imprisoned at Sachsenhausen, along with their biographies and individual odysseys during the Nazi era. However, there is no mention of how many tens of thousands of Jews and “irritants” to the regime were identified through the comprehensive German gun registration system that fell into the Nazis’ lap, prior “safeguards” notwithstanding.

Is the horrible conversion of the Weimar Republic’s naively intentioned gun registration and control system into an efficient instrument of Nazi evil a cautionary tale for the United States? It is hard to imagine our nation descending into a dictatorship, and the U.S. Supreme Court’s affirmation of an individual right to weapons ownership makes such a nightmare still less likely.

But the fact that a Hitler or Stalin could not take power here does not mean that some politicians in power won’t try to further erode Second Amendment rights and other freedoms, toward some “greater good” they define.

There are countless examples of liberal efforts to harass and regiment the 100 million legal owners of firearms in the United States, ranging from long-standing registration laws in many states to the costly and heavy handed “Safe Act” of Governor Cuomo’s in New York. Readers of Gun Control in the Third Reich, however, may sense an involuntary chill moving down their spines when they learn of announced plans of the police in Buffalo, New York.

But recall the alarming report from last fall: the mayoral administration and appointed police leaders in Buffalo, New York declared their intention to descend upon the homes of recently deceased Buffalonians who, as determined by “crosschecking” (no IBM punch card system needed in 2015) were also legally permitted gun owners. Their mission: to remove firearms from the decedents’ homes, while families and friends are still grieving and organizing their loved ones’ wills and affairs. In their plan, Buffalo officials would execute this ghoulish confiscation scheme before families had time to consider whether to apply for retention of the family firearm, or perhaps to make a gift to another relative or responsible party.

The United States has remained a free nation because of our federal and state Constitutions, with their definitive separations of powers. Presidents, governors, and now a Mayor of Buffalo have overstepped their bounds time and again, but are most always eventually made to heel by the federal judiciary or by their respective legislative bodies.

So, no, we are not heading toward totalitarianism. But in era when the president’s appointees eavesdrop on reporters’ communications, punish political adversaries through the considerable power of the IRS, and collect growing files of information on as many Americans as possible, we must be concerned with the Orwellian implications of blocking ordinary Americans’ access to firearms, while using gun registration files and other personal information for their political purposes.

Gun Control in the Third Reich: Disarming the Jews and “Enemies of the State”
By Stephen P. Halbrook (The Independent Institute, 280 pages)