Holocaust Denial Is Alive and Well in Iran

In the midst of the nuclear talks on a final agreement between Iran and the P5+1, Iran will host the Second International Holocaust Cartoon Contest on May 9.

Iran has already made clear during the talks that, apart from the nuclear issue, it has no intention of discussing any other item on its Islamic revolutionary agenda. Hence, Iran will cling to its defiant stance on Holocaust denial, especially now that the West, led by the United States, appears wobbly in the negotiations. The first exhibition, held in 2006,1  centered on Holocaust denial, which was a main theme of the eight-year presidency of Mahmoud Ahmadinejad.

During his presidency several websites of a Nazi nature and content began operating in Iran with historical pretensions. One of them is nazicenter.com, which seeks to revive Hitler’s image and discuss Aryan racial theories.

Dr. Liora Hendelman, of the Alliance Center for Iranian Studies, who has researched the phenomenon notes that the Nazi Center’s online activity indeed receives exposure in Persian-language social media, but the level of its activity is relatively low, mainly because of international pressure on Iran and the monitoring of the Internet.  The site’s lack of exposure is not necessarily because of Rouhani’s election as a “moderate” president or less emphasis in Iran on the subject of the Holocaust.

The exhibition is organized by the House of Cartoon and the Sarcheshmeh Cultural Center. The secretary-general of the competition, Seyed Massoud Shojayee Tabatabayee, who is also head of the House of Cartoon, said that so far more than 800 works have been submitted and that the exhibition, which will include all of the cartoons, will be presented in Tehran.  Shojayee Tabatabayee also remarked that the chosen closing date (April 1) for submitting materials to the exhibition is known as April Fools’ Day — “the Holocaust is also a big lie that was invented by the Zionists.”

Shojayee Tabatabayee added that cartoons have been received from various countries including some in Europe, and that the goal of the exhibition’s organizers is to expose the “hypocrisy of Western countries” regarding freedom of expression. In his view, the West permits offense to the sanctities of Islam (such as in the magazine Charlie Hebdo) but prevents research on the Holocaust and the “Zionist regime.”  Shojayee Tabatabayee said the West shows great sensitivity on the subject of the Holocaust and “we have decided to confront it and challenge it on this issue.”

The exhibition’s organizers also believe the Holocaust is not a historical fact and is open to doubt and discussions. The center hosting the exhibition asserts: “If freedom of expression knows no boundary, the issue of the Holocaust must also be critically and freely reviewed.”

The organizers also posit a link between the Holocaust and the price they claim [so-called] “Palestinians” have to pay for it: “Why should Palestinian oppressed people that didn’t have any role in world war II compensate Holocaust? (sic)” The center is also inviting cartoons on the topic of Israeli Prime Minister Benjamin Netanyahu and Hitler. 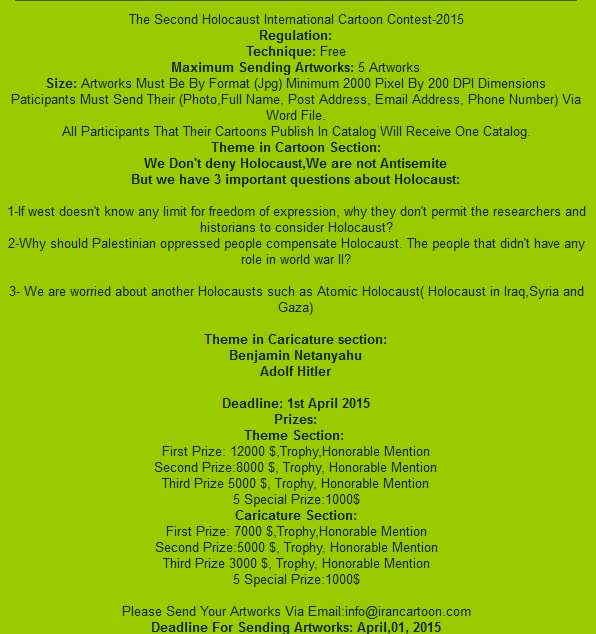 Details of the Cartoon Contest 2015

The organizers have launched a website in several languages (English, Arabic) that gives the rules and topics of the competition, an address for submitting cartoons ([email protected]), as well as details on the prizes and a list of participants.

Although the Israeli delegation to the United Nations already protested the competition to the UN Secretary-General in February, Iran has not been deterred. Israel’s UN ambassador stated then:

“This contest legitimizes Holocaust denial and encourages Holocaust deniers to continue their incitement.…It ridicules one of the darkest events in human history, and it cheapens the death of millions of Jews who were murdered. The horrors of the Holocaust are still fresh in the collective memory….The cartoon exhibition runs in contravention to the international community’s decision to perpetuate the memory of the Holocaust and to internalize its lessons.”6

The exhibition, which organizers have planned as a challenge to freedom of expression in the West, is another tool in Iran’s ongoing policy of defying the West. It also gives Iran an opportunity to show the Muslim world that it is confronting the phenomenon of insults to Islamic sanctities from a position of strength, especially cartoons mocking Muhammad that have been published in several Western newspapers. The competition also fits well with the general Iranian aspirations of leading the global Islamic movement against the West, which is in a process of retreat from the Middle East.